A few days ago we decided to take a break at a home-stay in Coorg, and so had to take the Mysore Road out of Bangalore to Coorg. To avoid getting caught in a traffic jam, we always get out early in the day and that day was no different.

The road was in an excellent condition which was a happy surprise for us, as most roads in Bangalore are in a mess, and we are used to pot holes remaining for even a decade. The only worry we had was the road humps, because we had hit one the last trip and damaged our car. Humps which are built with no scientific input at all, just a killer hump of tar which most often can damage the undercarriage of a low-slung car. The main reason of course is that there are no boards to warn motorists, and sometimes one can hit it at dangerous speeds. 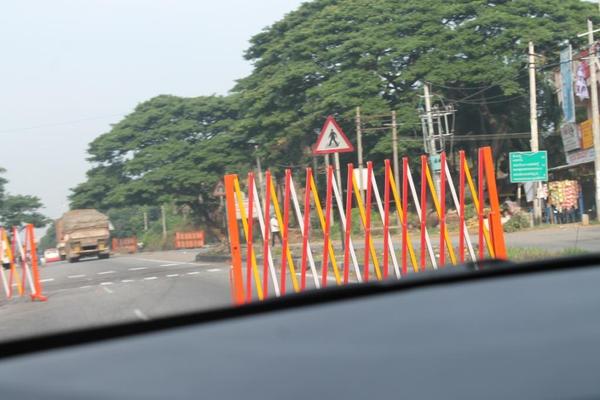 The road humps on Mysore road have been replaced by expandable gates. Pic: Marianne de Nazareth

Happily the humps had disappeared by law, but in their place were these weird expandable gates which were even more dangerous. 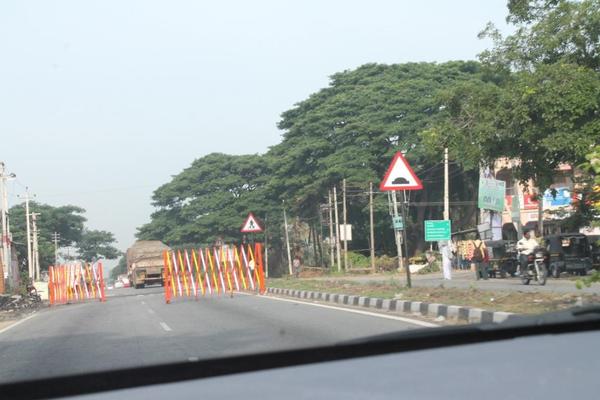 The gates are places at different segments of the road, making it difficult for large vehicles to manoeuvre around them. Pic: Marianne de Nazareth

Each ‘gate’ is put at a different segment of the road, as can be seen in the picture and for a huge truck or a bus, one wonders how safe it is negotiating these weird ‘gates’. Every ‘gate’ had a notice proclaiming who had donated them to the traffic police. So, instead of the humps, there were these ‘gates’ all along the road which could cause traffic pile ups, when the merged into a two-way.

Never in all our lives have we ever seen anything like this anywhere in the world. We wondered where our traffic police had dreamed this invention up from.

En route to Coorg, we thankfully negotiated safely past all the colourful gate barriers without any mishap, but on our return we had another more interesting ‘catch’ on the road. Once past Bangalore University, one suddenly sees policemen in uniform, quickly come onto the road to stop random cars. Apparently there are signs which indicate that the driver must not go above 60 km an hour. They sit hidden in a van, and swoop on drivers who are unaware of the rule. 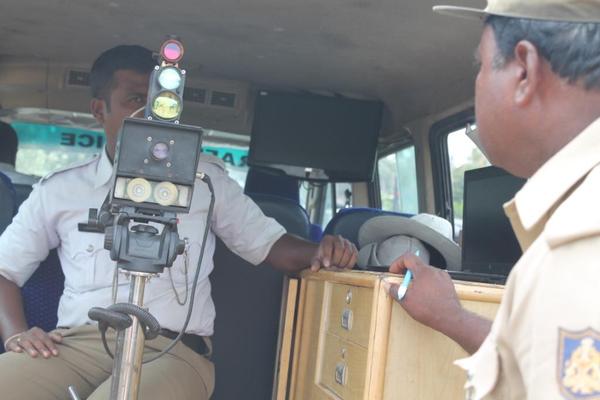 We had just picked up speed after crawling through a massive traffic jam when they swooped. Obviously a known spot, and they were aware that they could get a lot of unsuspecting drivers in their net.

“What to do Madam, I have to get 75 numbers by 6 pm,” said the policeman issuing a Rs 300 fine to dozens of zapped motorists. “I have only 60 numbers now and it is nearly 5 pm,” he said. There were many people begging to be let off on scooters, saying they did not have the money, as can be seen in the picture. 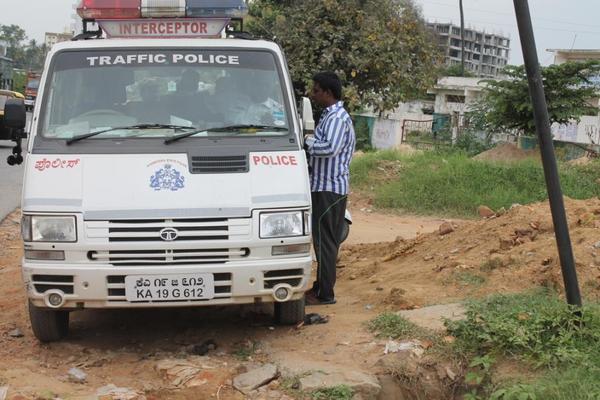 A motorist negotiating with the police. Pic: Marianne de Nazareth

Such a terrible end to a wonderful trip to Coorg, but I hope this story gets the attention of the concerned authorities and the harassment of motorists is stopped.

“Please don’t beat him; let the cops take him to the police station”

A man reportedly driving crazily, mowing down people and perhaps even hurting a cop, is chased and finally stopped. Then, in an instant, the crowd becomes a mob, and is on the verge of losing control. Can you imagine this in your residential neighbourhood? Ammu Joseph witnessed such an incident today and posted this account of it on Facebook.

But is Bus Day really a success. Did it encourage commuters to use BMTC for one day or regularly?

“To make the Volvo AC bus viable, link it with railways and Metro”

As BMTC’s Volvo buses are loss-making, the government recently suggested withdrawing these. But there are ways to turn the situation around, says the author