One of the amazing things about the city of Bangalore is that it sits on a natural wonder… the rock that the city sits on is one of the oldest exposed rocks in the world. 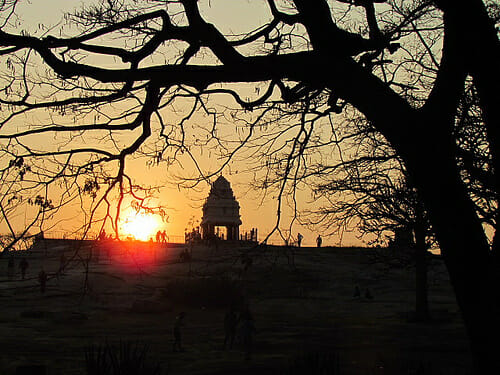 This wonder of Nature, called Peninsular Gneiss, is so easy to see. Here’s what the Wikipedia entry says:

“The Geological Survey of India identified one of the best exposures of this rock mass, protruding high above the ground as a hillock (pictured), dated 2.5 to 3.4 billion years, in the Bangalore city in India at the famous Lalbagh gardens and declared it as a National Geological Monument to propagate the knowledge of the rock formation among the public, since Lalbagh is frequented by visitors from all over the world. It is also called the Lalbagh rock.” 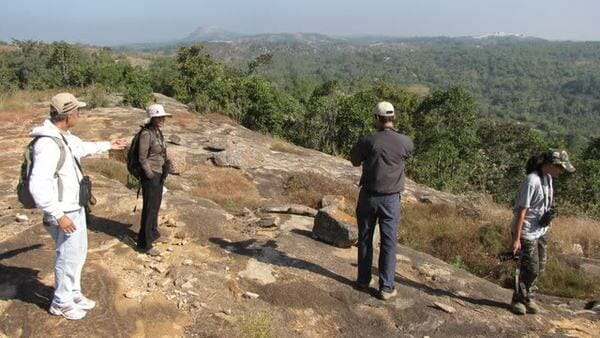 Peninsular Gneiss is metamorphic rock. That is, it is rock which has been subjected to heat and pressure, causing profound physical and chemical changes. So, in a sense, one can understand someone talking about the “living rock”!

It is, of course, spread over the area surrounding our city, too, and can be found in the areas surrounding Bannerghatta, where I took the snap above. I was so awed by this rock that I took a video of the vista:

Another amazing feature are the dolmen, or ancient burial sites, on the sheet rock.

In the Megalithic age, people did not bury or cremate the dead; the bodies were covered with pieces and slabs of this granite, and left to become one with nature again. Some of these structures, called sarcophagi, are nearly 3000 years old. But the practice was also maintained till just about 8 years ago by a local tribe, called the Irulas. So it is that a love of nature can lead us into ancient history, as well!

Bird-beaks reveal eating habit!
Once upon a time when Sarjapur meant Muslin cloth…
Mootoocherry and St Marks: These are districts, the English built

In a performance last week, Prathibha Prahalad traced the origin and evolution of worship in Bharatanatyam through centuries.

A music aficionado gets lyrical about the Sunday evening musical concerts organised by ‘Prakruti’ at Cubbon Park.

Brindavan Express is not quite as fast as it used to be, nor is it the unchallenged monarch of the Bangalore-Madras route. Similarly, life has changed for the author too, while he misses his childhood and memories.