I saw this beautiful moth on the staircase of my apartment building,  day before yesterday…. 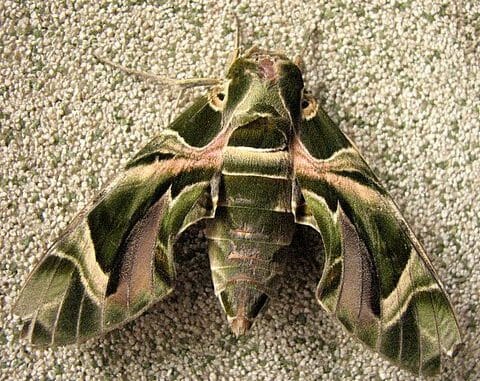 I called it the military camouflage moth, but the correct name for this is the Oleander Hawk Moth, in the Sphinx moth family Sphingidae.

The scientific name of the moth is Daphnus nerii.

The caterpillar of this Moth, like that of many others, has several “instars” or forms. Here’s one: 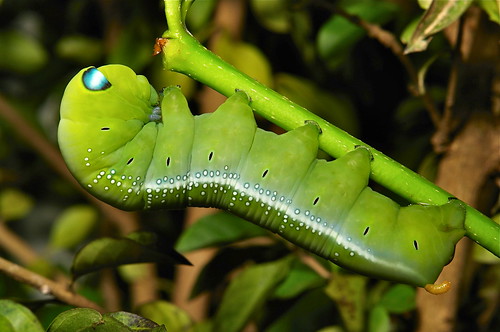 The head of the caterpillar is actually towards the right…the “eyes” are probably to fool a possible predator with that appearance of fierceness.

These caterpillars actually feed on the Oleander plant, much of which is very toxic to humans…but to which they have a high tolerance! So, in this sense, they remind me of the god Shiva, who, according to legend, swallowed the poison that emerged during the churning of the Ocean of Milk.  But Shiva did not ingest the poison (it remained in His throat)…but these creatures eat it and thrive!

Here’s what the “cat” looks like just before it pupates. It’s a lovely cat, isn’t it? Look at all the Morse Code on its sides!

Moths can be as stunningly  beautiful as their cousins, the butterflies…so do look around when you walk around the gardens near you!

Raghu Dixit’s performance had listeners up on their feet and most of them up on their chairs.

Ranga Shankara is an excellent initiative to keep “Theatre Alive”, as the fifth anniversary tagline goes and keep theatre affordable and available for citizens.