If you are a frequent visitor to Lalbagh, you may have seen the various animals and birds that have made it home. Along with an abundance of dogs, squirrels and birds, you’ll also find monkeys! And if you happen to take a stroll on the trail that leads to the lake from the main gate, in all likelihood, as you near the staircase, you will bump into some of the simians, and a gentleman named Shivshankar. For the past year and a half, he has been feeding the monkeys at Lalbagh.

A Maharashtrian by birth and a resident of Andhra Pradesh, Shivshankar moved to Bangalore around two years back, when he lost all his property in a family dispute. At that time, he was penniless and without a job. He says he had decided that the only way out was to end his life. Just before doing so, he happened to feed a monkey. No sooner than that happened, he felt someone hug him from behind. “It was a stranger who put some money in my pocket and reassured me that everything would be all right. I believe that it was Lord Hanuman who came to my aid when I was in distress; only God would have known I was in trouble”, he says.

Since then, there has been no looking back for Shivshankar! He is now a man who wears many hats, that of a mechanic, a plumber, an  electrician and several others. On most days, he also feeds the monkeys at Lalbagh.

“I come here two to three times a day to feed them. I give them fruits and vegetables and I mostly pay for it from my own pocket. Some people who have seen me feed them have contributed small amounts as well”, he says.

You will find Shivashankar between 6 am and 10 am in the mornings and between 4 pm and 6 pm in the evenings. 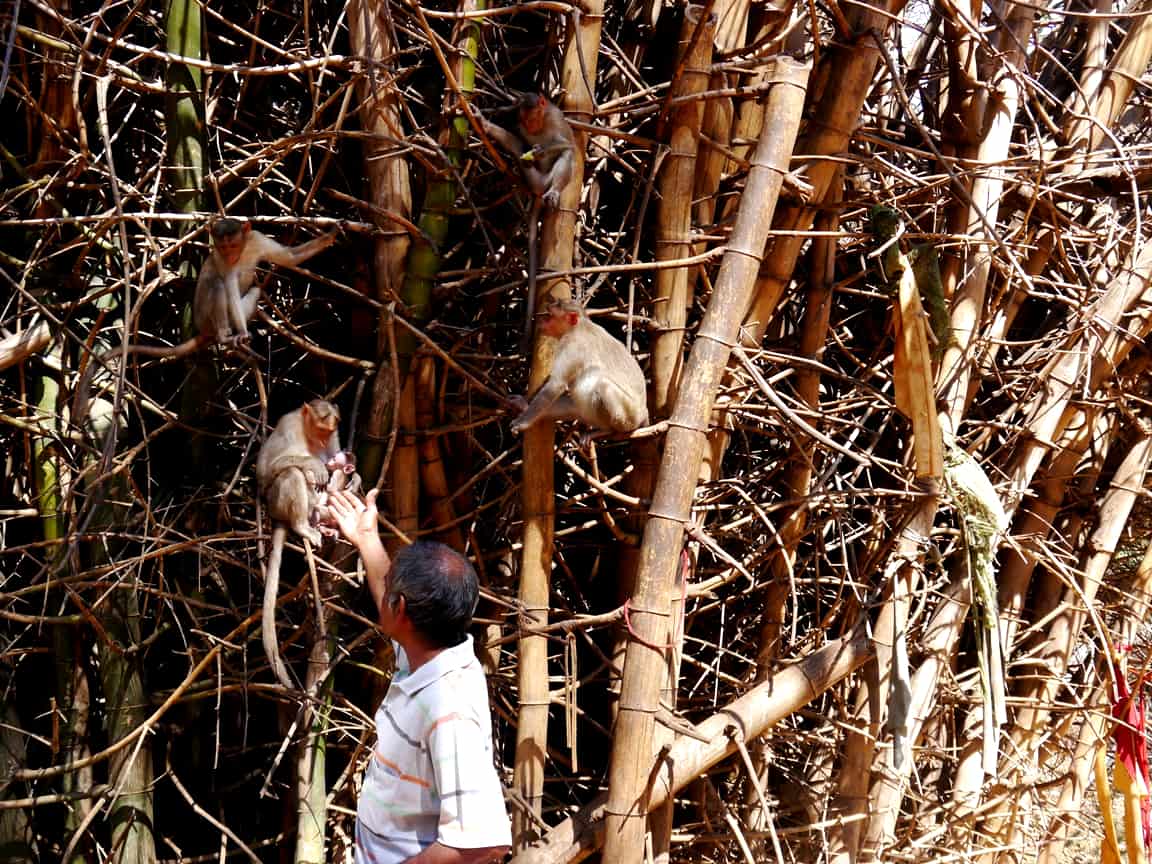 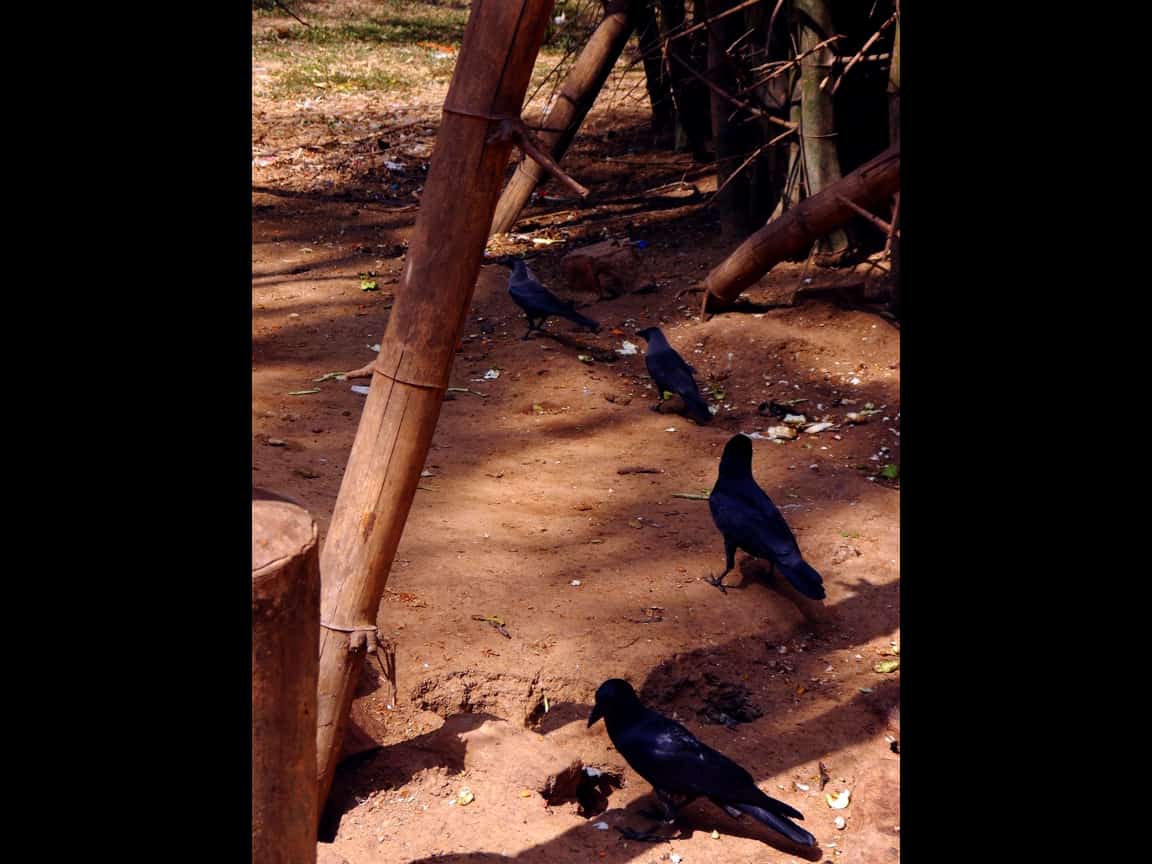 That is one murder (of crows) that the police need not worry about. 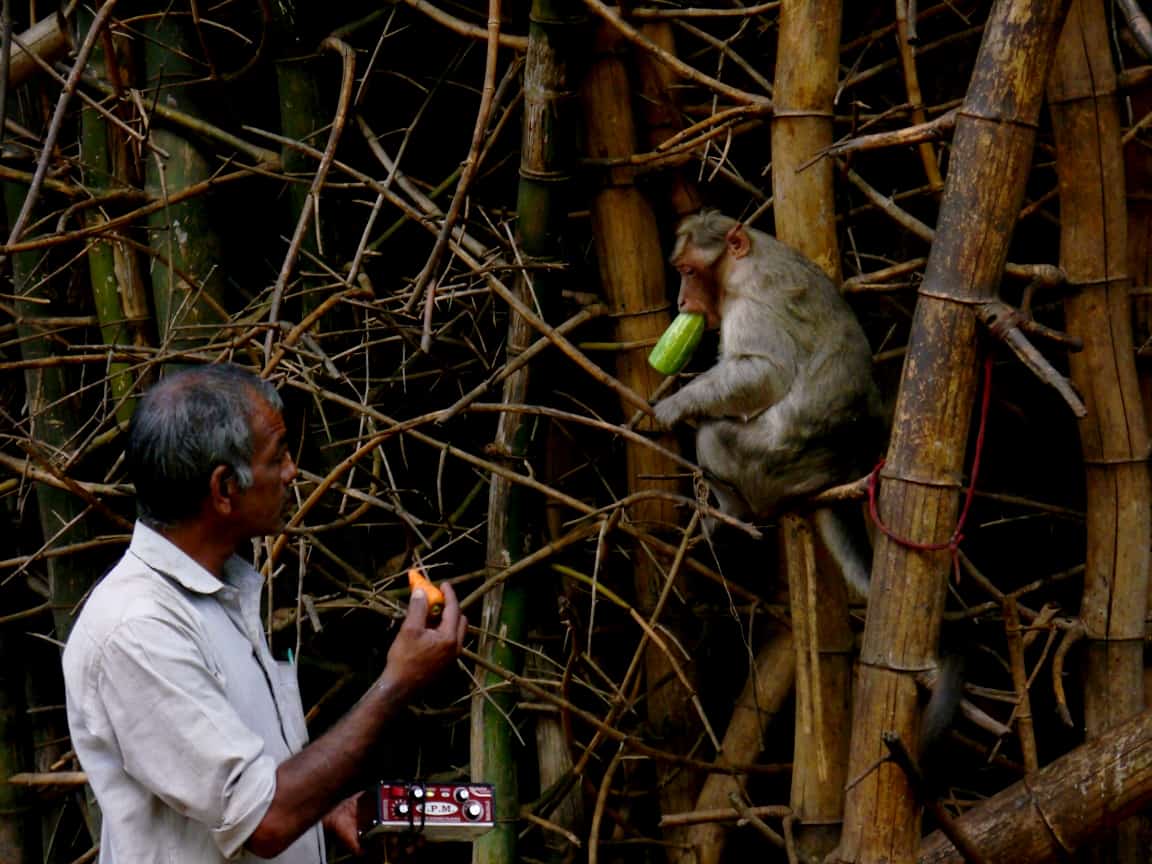 “Stop monkeying around and eat your veggies!” 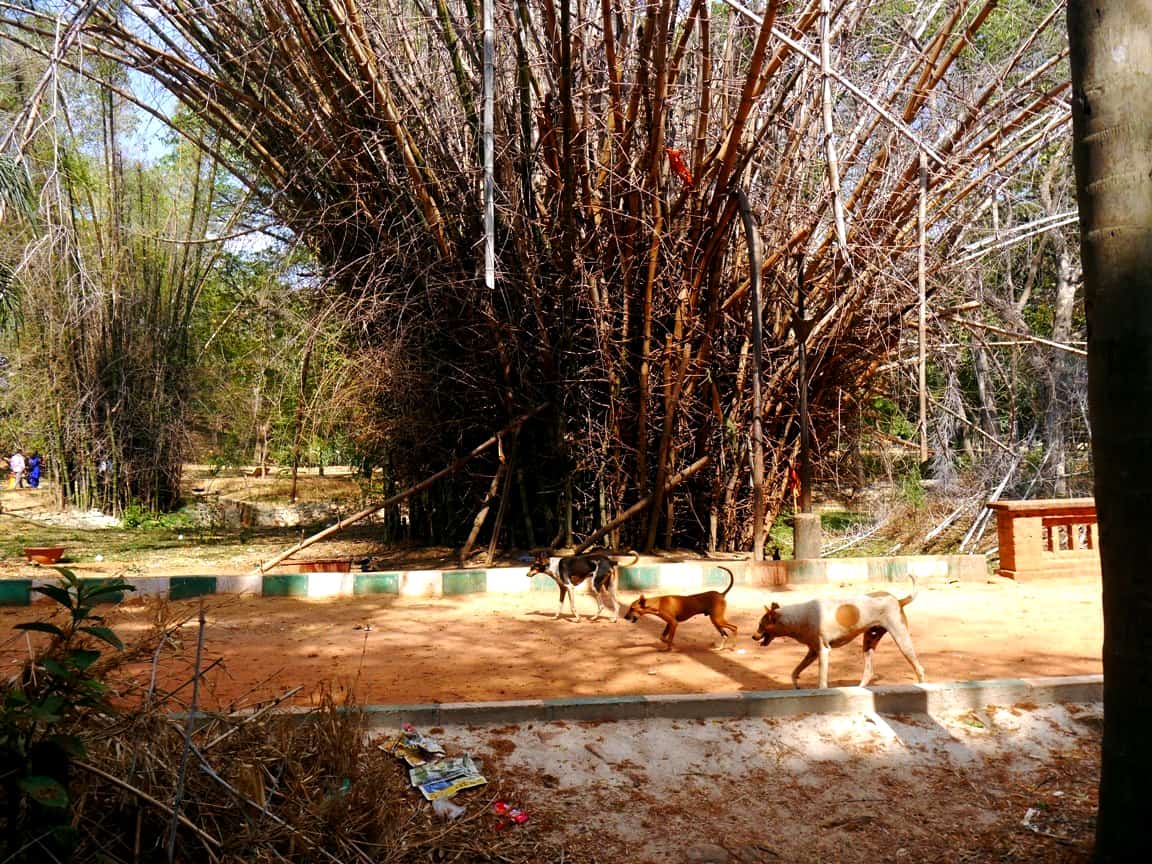 It wasn’t long before they realised their mistake and crashed the party, bringing it to a halt. 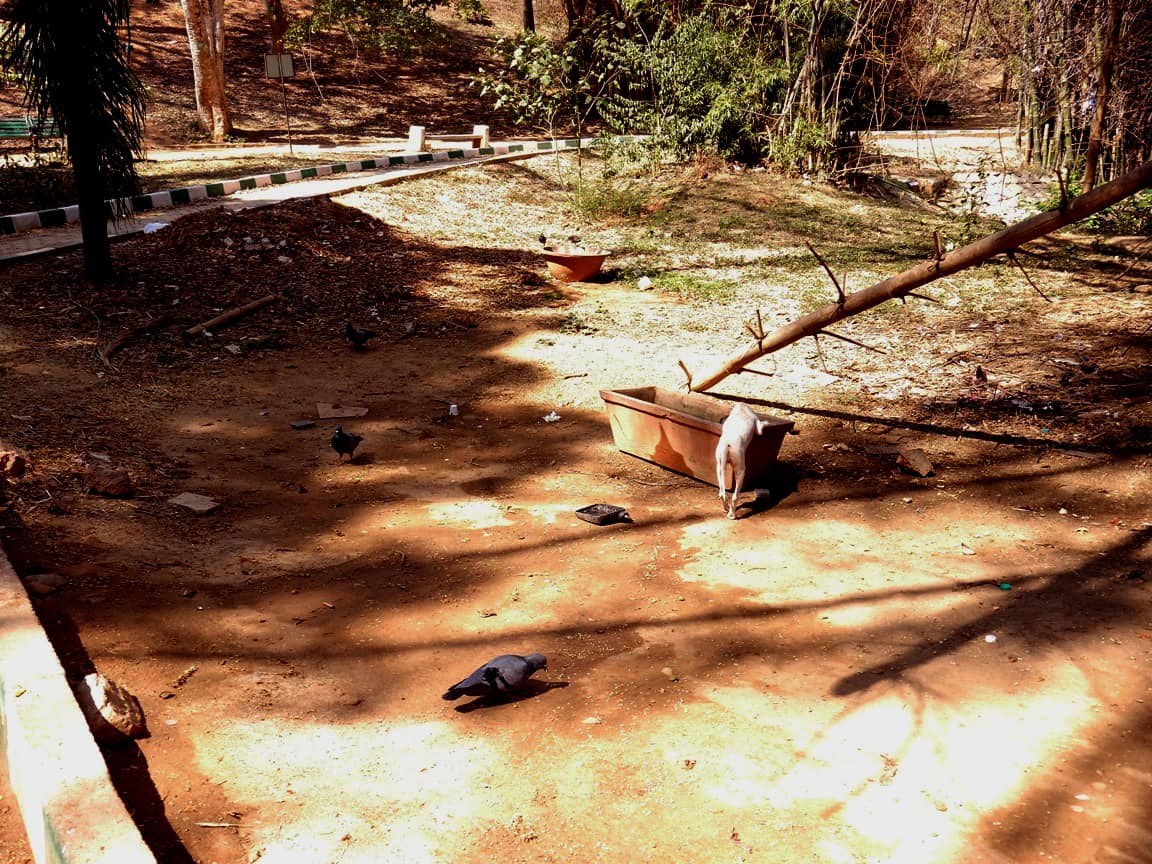 A pup makes a guest appearance. Its almost like a mini zoo here!

After watching Shivshankar with the monkeys, it struck me that we are no different from statues. We sit idle, not contributing to society. It is people like Shivshankar who really make a difference. 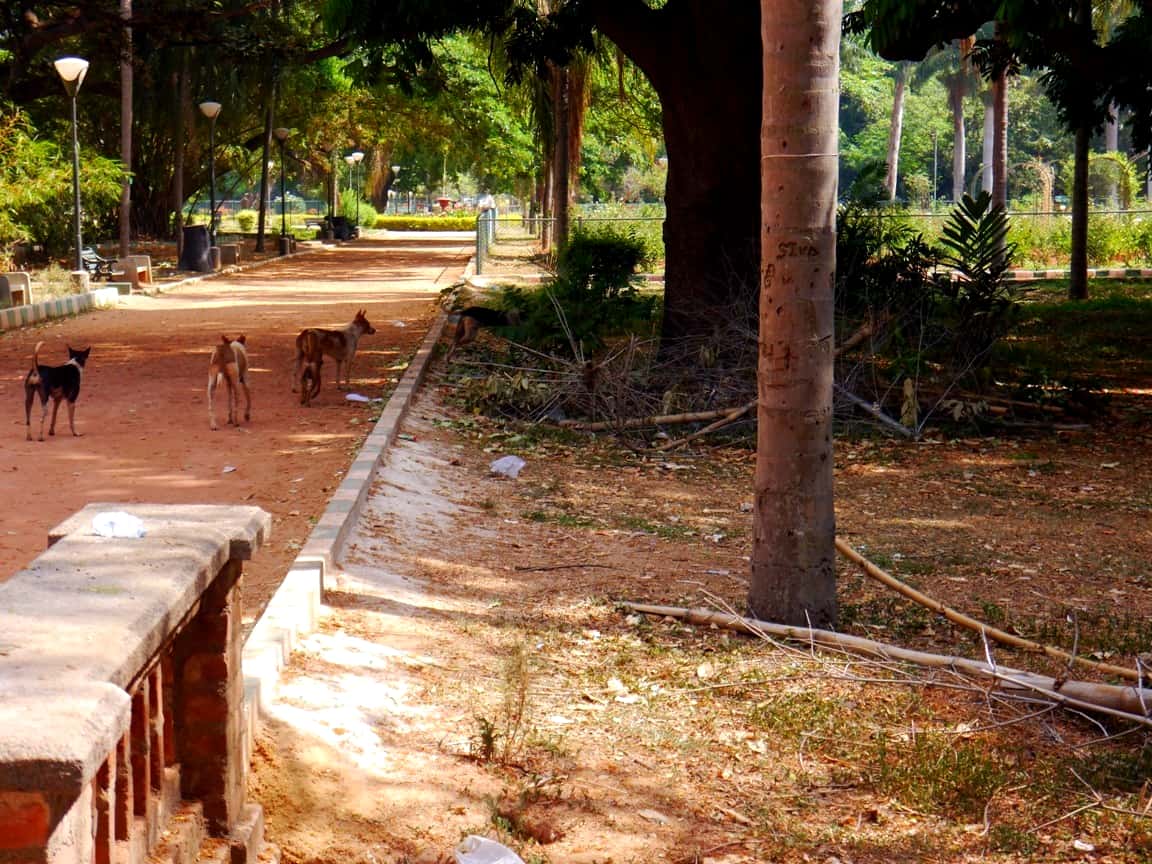 Jealous neighbours, not tolerating the fun others are having, end up barking up the wrong tree. 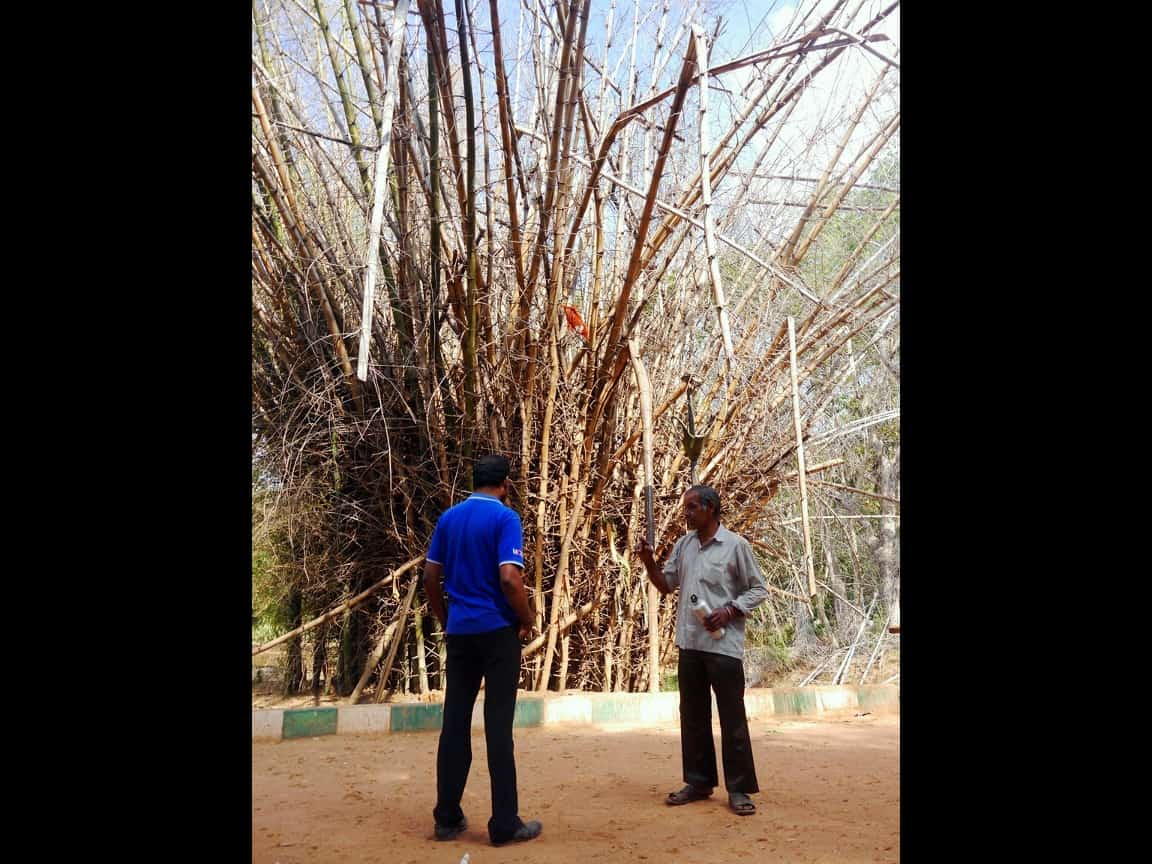 Passers-by are amazed by the activity in the area. Shivshankar speaks to them about the monkeys and his life.

The nutty one from Ice Age joined in for a treat! 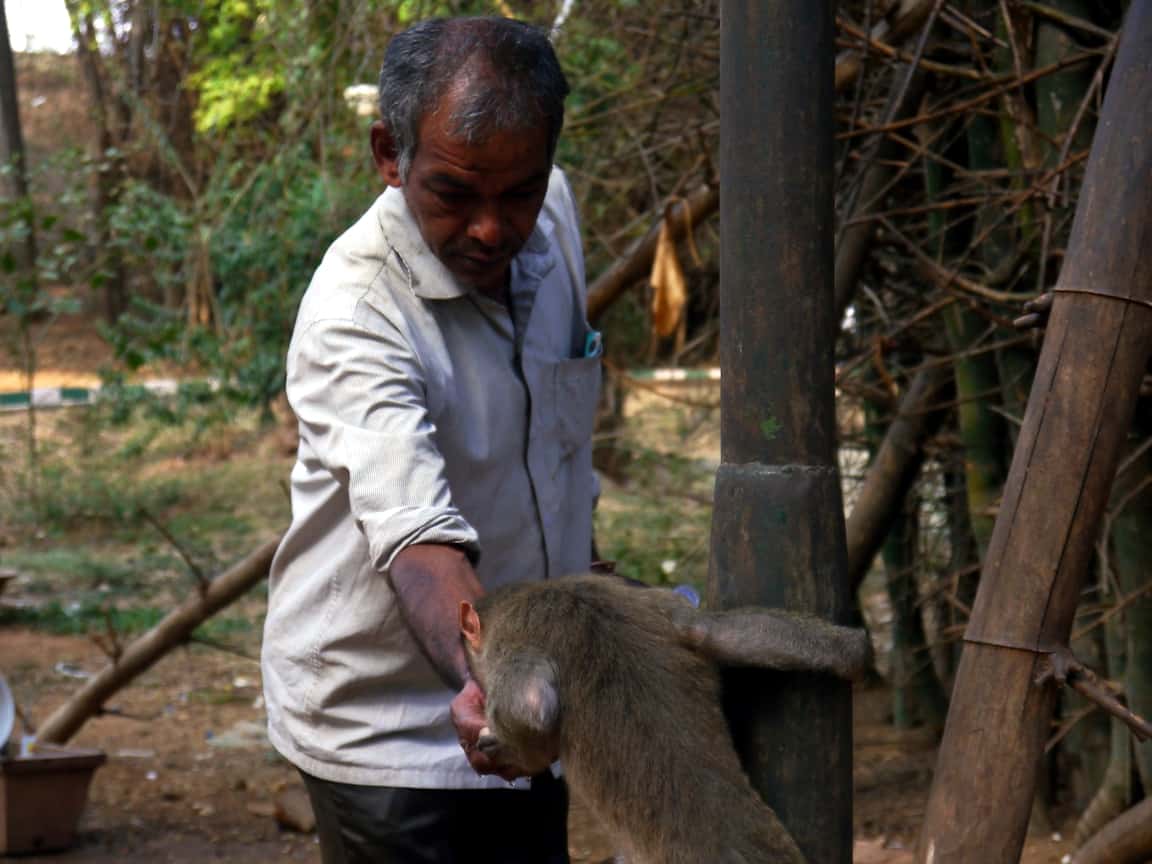 Another, quenching its thirst. 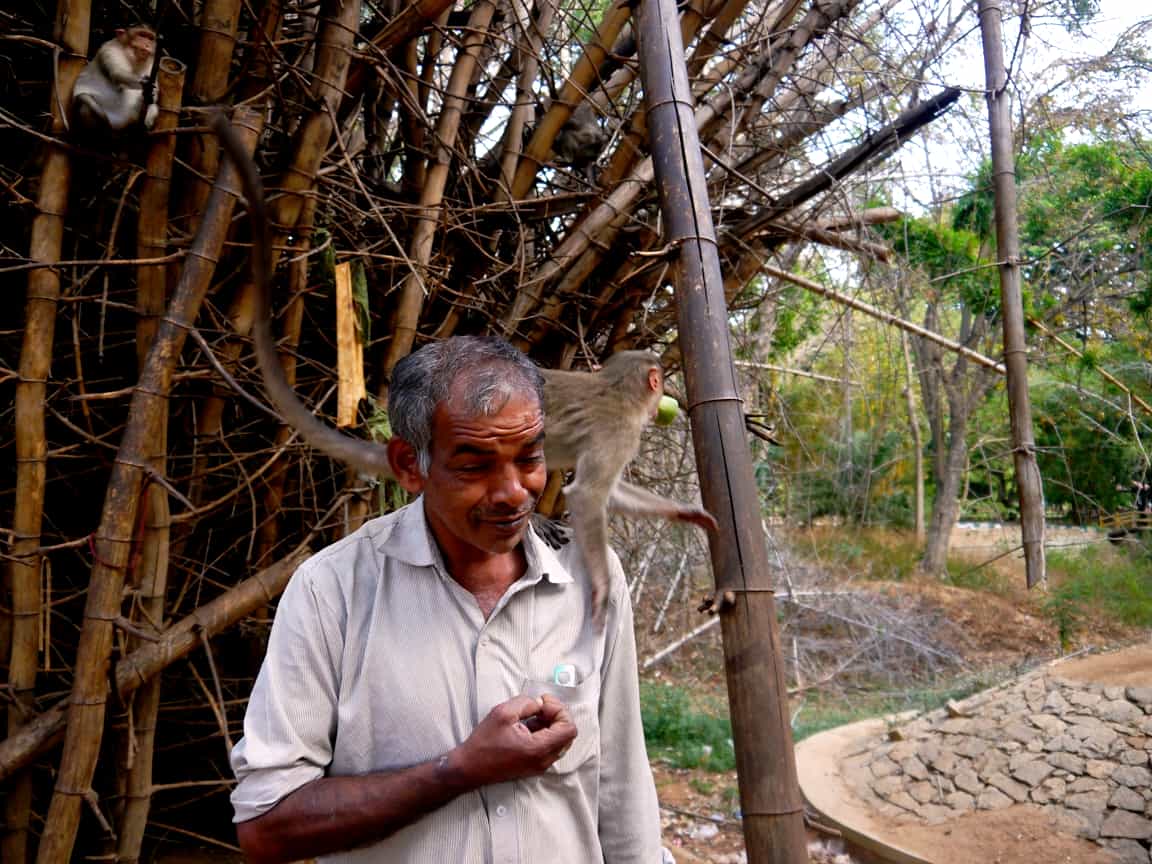 Mann-ki Shanti is what he gets! 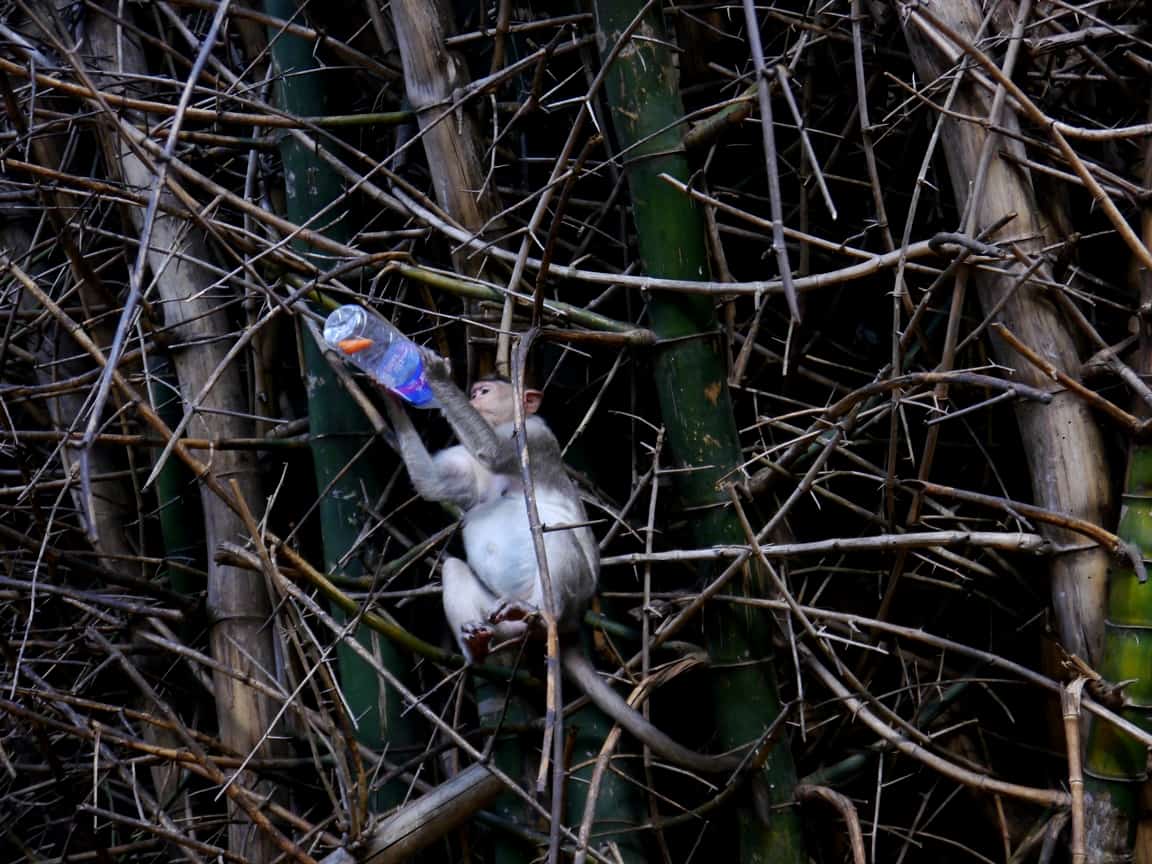 Here, have a sip. 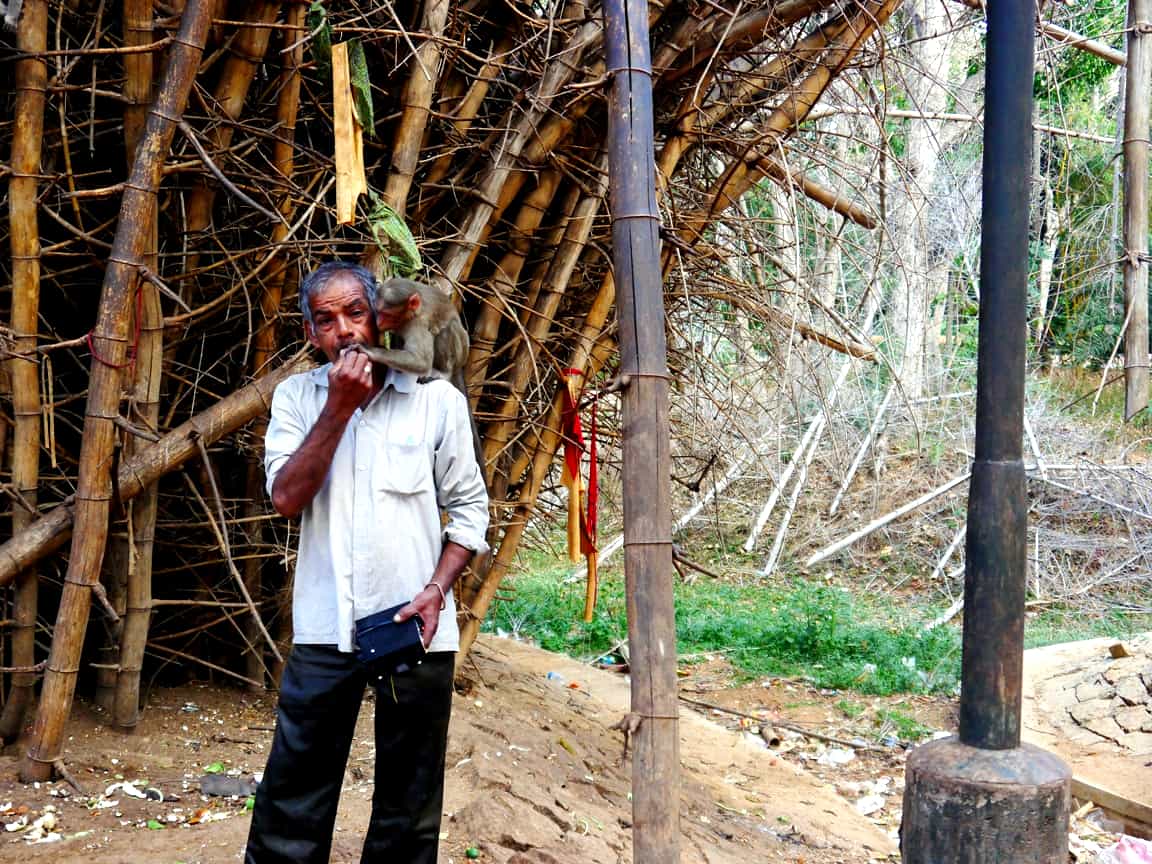 Since there are no rules against feeding humans in the animal kingdom. 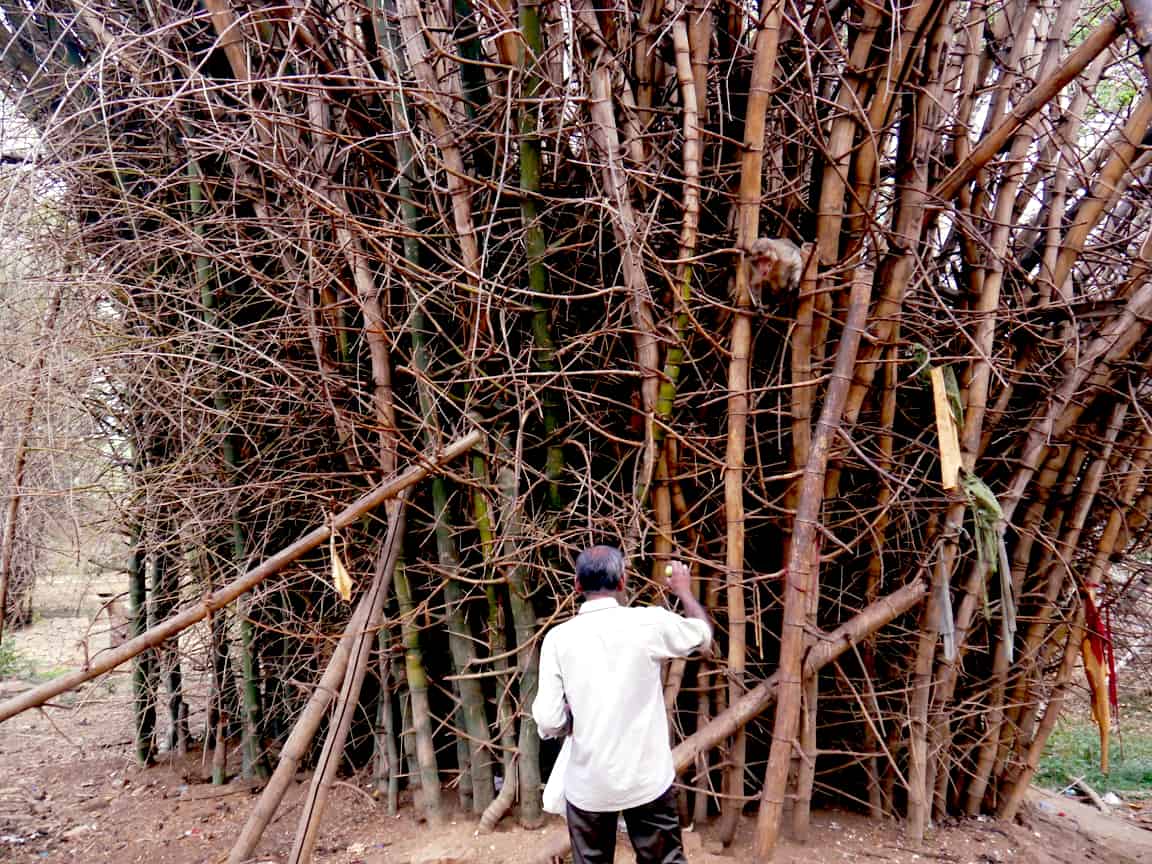 A head popped out of the bush. Yes, a monkey indeed. 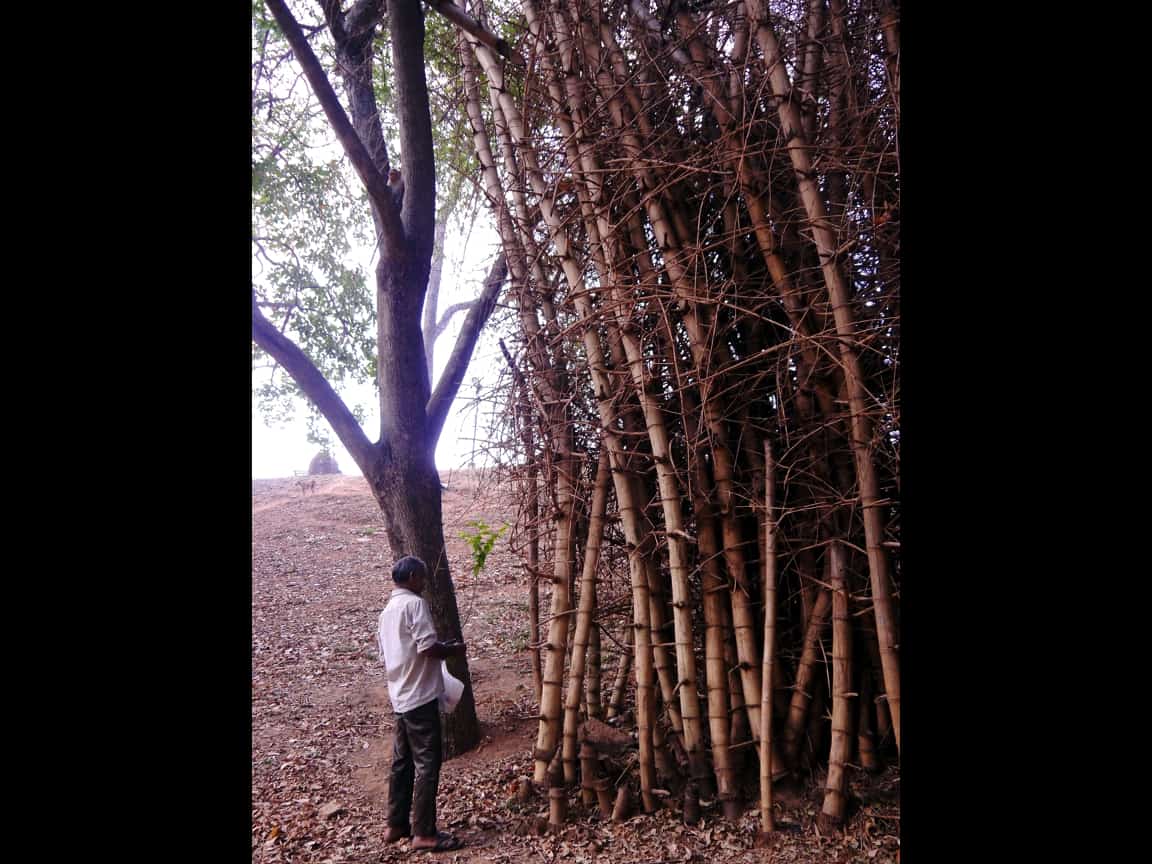 The man kept his things on a bench and walked up to a bamboo bush. 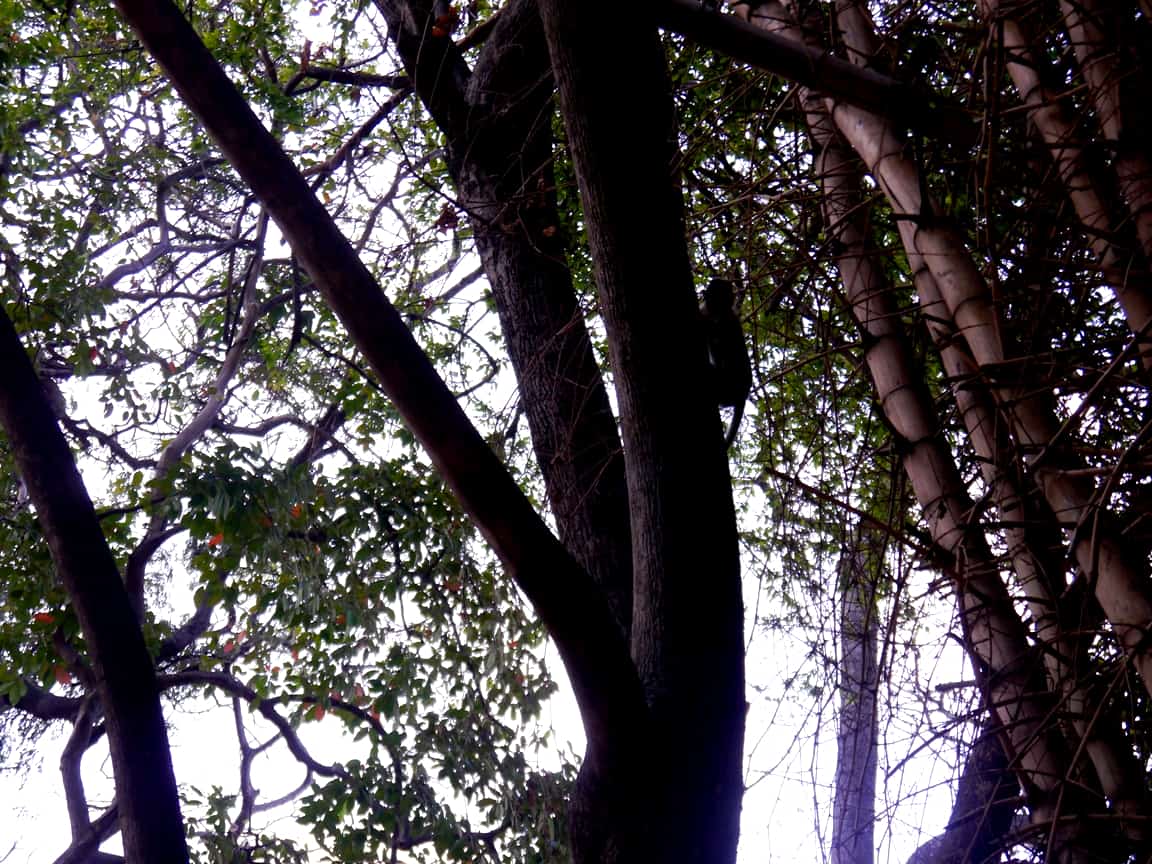 Following the trail that continued till the lake, I could see hazy figures moving about in the trees. 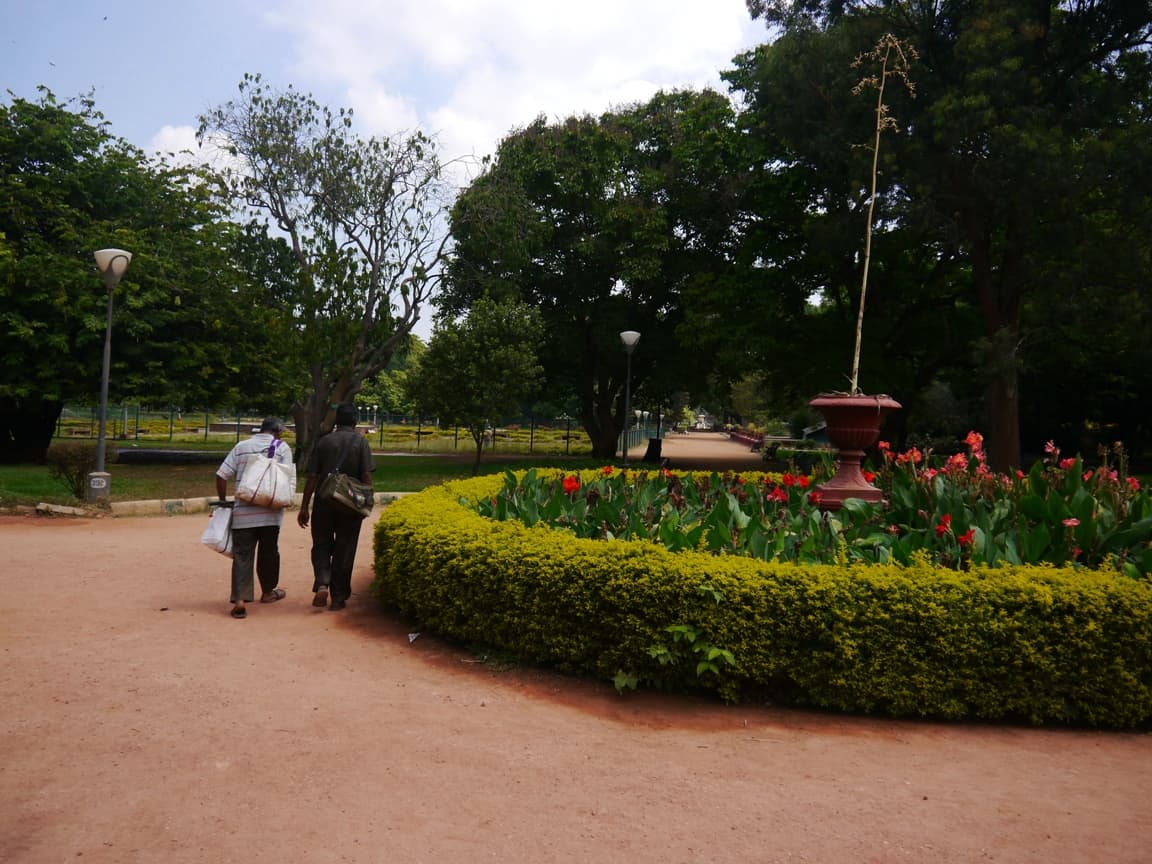 Just then, I saw a man walking, bags filled with vegetables and a cycle pump in hand. Intrigued, I followed him. 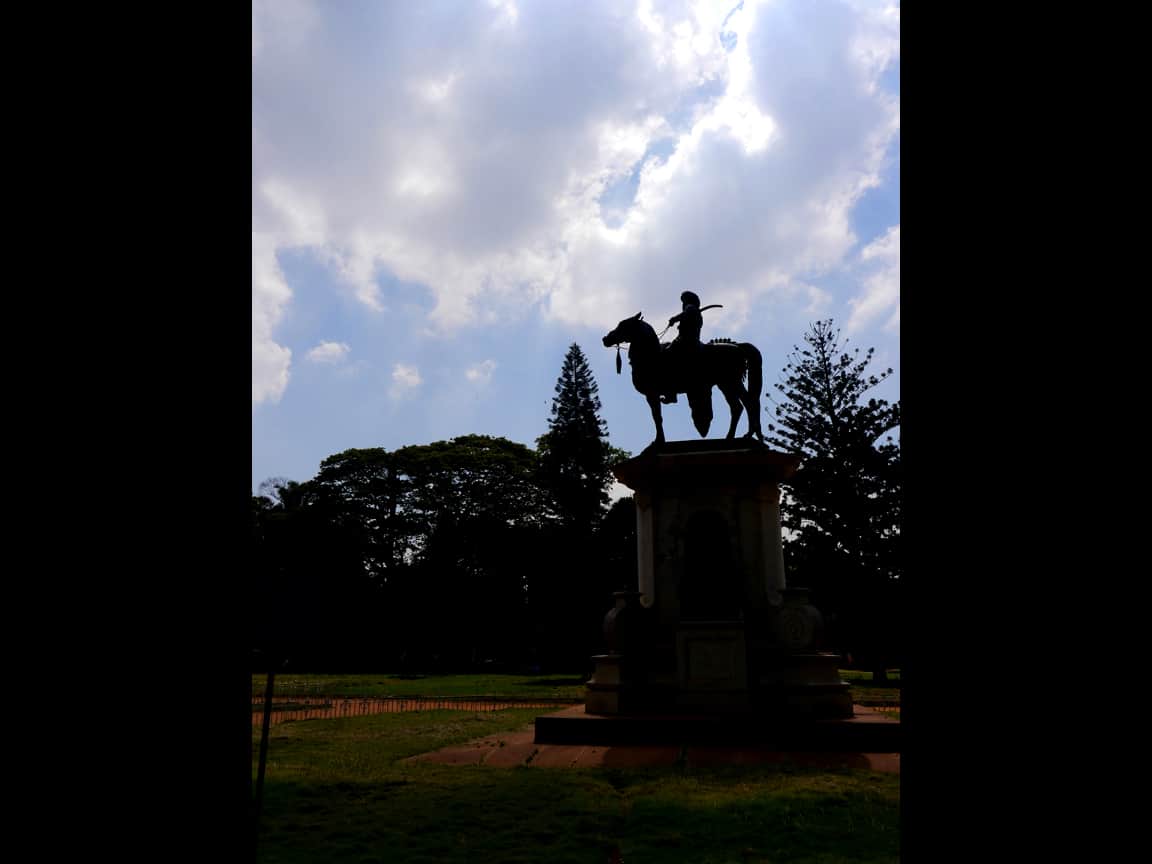 A statue of Chamaraja Wodeyar, the 23rd Maharaja of Mysore. My walk from the Lalbagh main gate continued on. 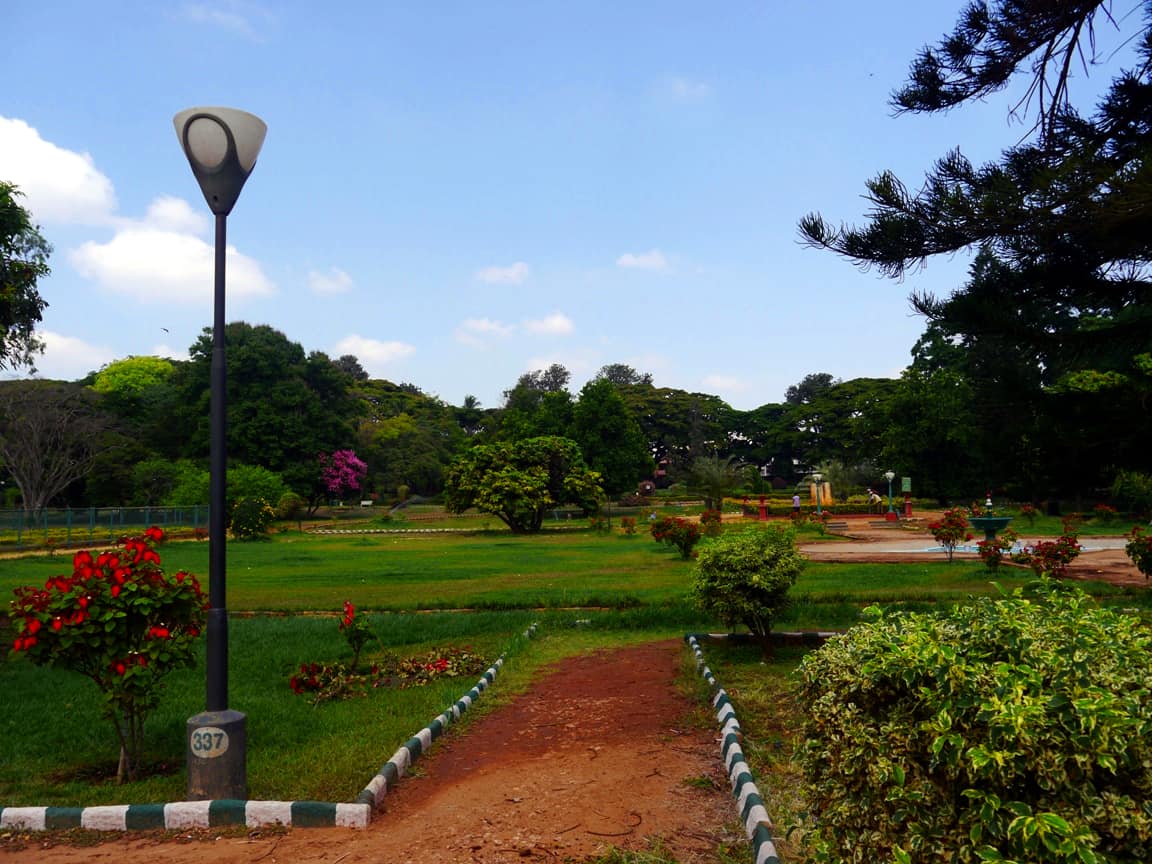 A spectacular morning at Lalbagh, where it seems as if the trees and flowers have remained the same for ages. Seems like apple is pretty popular among the monkeys too. Little do they know that some of their cousins line up for days in front of an Apple store! 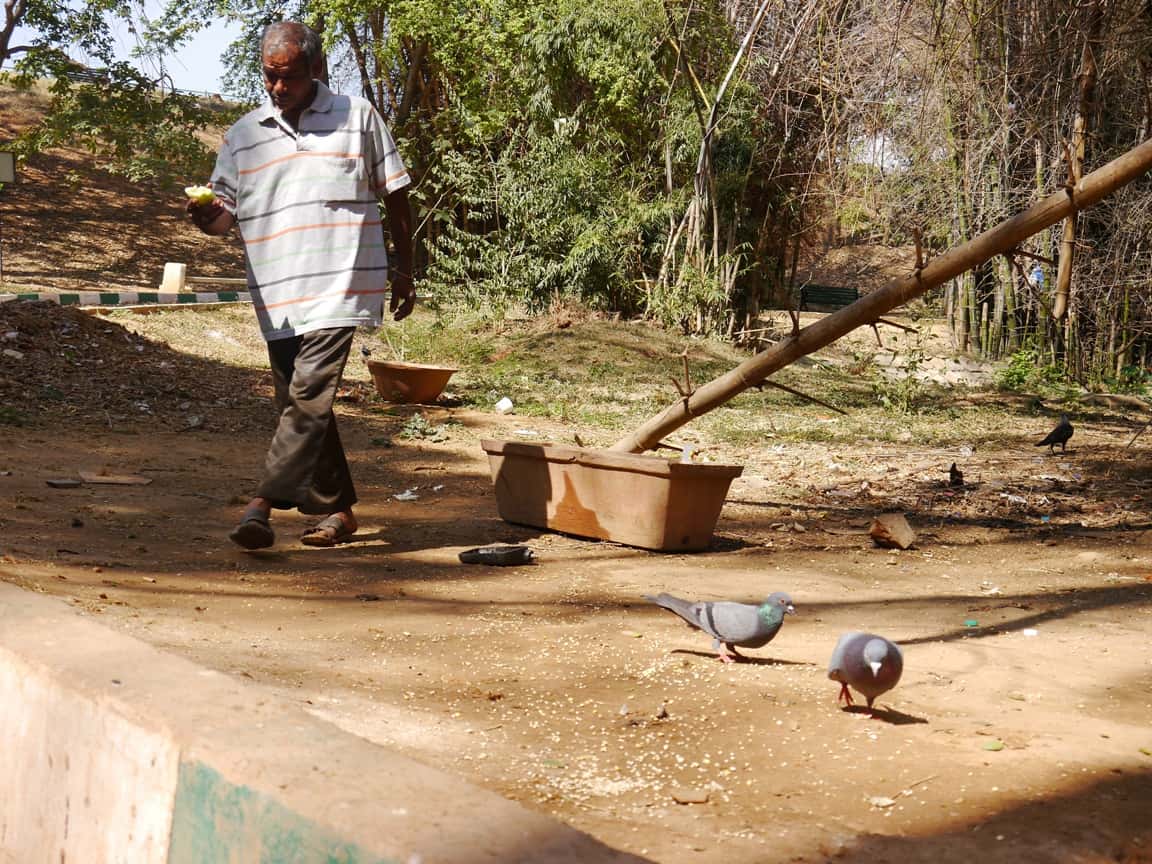 Pigeons in the house! 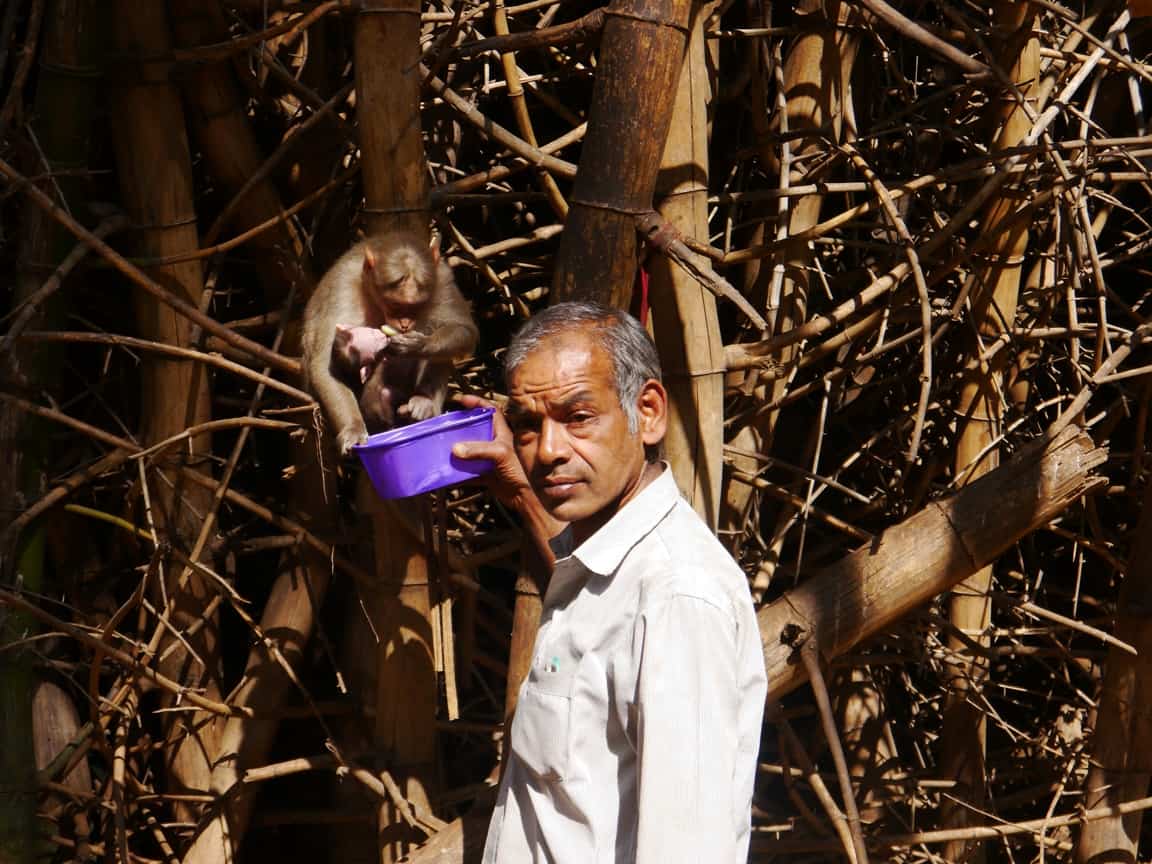 He gives her a piece of apple. A mother and her child begin their descent.

Note: This article is a report of what the author saw in Lalbagh. Citizen Matters neither endorses such deeds as good, nor judges them as bad.

About Rahul Ravi 5 Articles
Rahul is an intern at Citizen Matters.

Pustaka Parishe, free books for all

Kadlekai parishe sells varieties of groundnuts. At the book parishe though, a wide variety of books were give away for free. The books are donated by book lovers who want to spread the joy of reading, especially Kannada literature.

What should we call an Indian lady going to Australia to play an Indonesian instrument? Extraordinary! Meet Anasuya Kulkarni at her home in JP Nagar.

5500 saplings of 96 varieties. 400 volunteers. Five hours. And the result would be a dense forest in Bengaluru, in next 10 years. How did it happen?