I was heading to office one afternoon, when I saw a woman under the flyover. Greasy stains on her clothes, hair all knotted and tangled, she was wandering the streets, talking to herself. Nobody cared about her; nobody heard her. 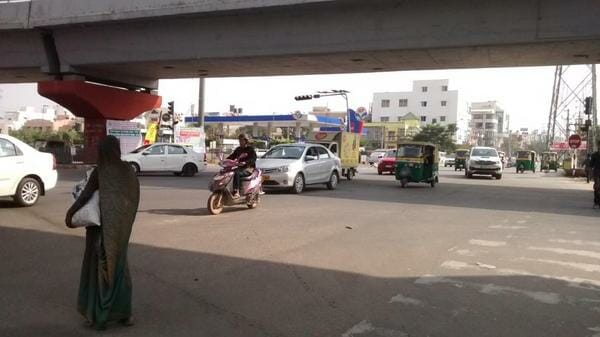 I felt sympathetic towards the woman and I stopped by the flyover and went near her. I was trying to do the best thing that I could and I offered her Rs 100. She looked reluctant and declined my offering.

I tried to make her accept it by talking to her in Kannada and Telugu, but she didn’t seem like she understood either language. She said something in her own language which I could not understand. Hand gestures or signals did not convey much either.

Instead of money, I should probably offer her food. So I rushed to a sweet stall to fetch some eatables and juice for her.

By then, she was sitting under the flyover, near one of the cemented pillars. She bowed her head and took a parcel of food from her polythene bag. And she began to eat her food. She seemed entirely unconcerned about the situation.

I offered the eatables to her while she was eating, and she declined my offer yet again. I was trying to tell her to save this food for later, but she was not convinced. All I could do was watch her silently for a few moments.

Of course, people around us looked at us with puzzlement. I had tried to do my best to help, but she did not care for the money or food I offered her.

It was then I realised that not everyone in the world is motivated by money. There are people who are happy with just what they have!

About Ashok Kumar S 3 Articles
The author has not yet added any personal or biographical info to her or his author profile.

Fed up by the callousness of the builder, residents of Umasree Dream World apartment complex protested on October 2. The builder did not provide the promised amenities, including RWH.

Science Express in Bengaluru: The wait’s worth it

Saturday (10 June 2017) morning saw me at the Kengeri railway station. I was there to see the Science Express – Climate Action Special. This was a special train exhibition that had reached Kengeri the

A second wave was predicted, yet the State government made u-turns on restrictions, claiming we are prepared with beds, oxygen and hospital infrastructure to deal with it.