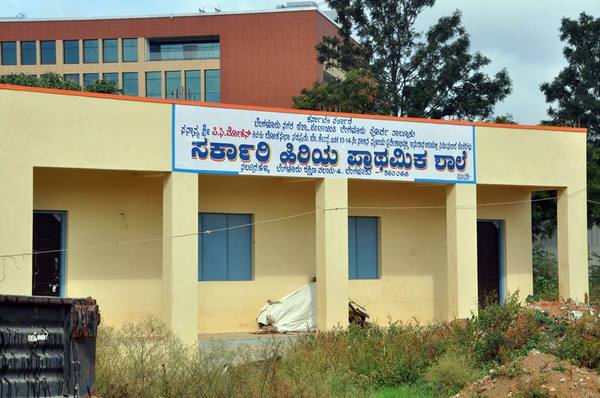 Even after years of construction, the building of the Government Higher Primary School, Nallurahalli in Whitefield remained unoccupied. Inaugurated with much fanfare five years ago, the school building which is supposed to shelter students, turned out to be a dumpyard for builders. Eight classrooms in two blocks of the school were used by local contractors to dump the cement sacks, concrete blocks and other waste materials.

However, the situation is going to change soon. You will hear the chitter-chatter of children in the school premises. A bunch of out-of-school children from closeby slums will get an opportunity to attend classes in the school building. The building will be painted, given electricity connection and provided with toilet facility soon. Thanks to the efforts of the community group Nallurhalli Rising and other organisations, the school will finally be utilised for the purpose it is meant for.

Spotting them on a busy weekend

A team of citizen traffic wardens from community group Nallurahalli Rising, decided to clean up an abandoned park located at some distance from Nallurahalli town near Whitefield. As they began removing weeds and cleaning the surrounding on fine week-end, they found a boy staring at them with his curious eyes. The team followed him and discovered a bunch of kids in the neighbourhood.

“Why are the children loitering around on a Saturday morning without going to school?” they questioned themselves. A bit of talk with children and their parents revealed a bitter truth. They were the residents of a slum in Nallurahalli. None of the children in the age group of 3 to 10, who numbered more than 50, went to a school. 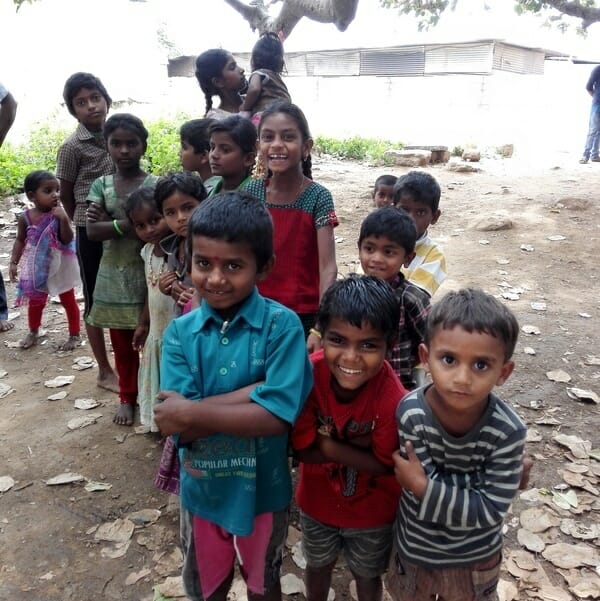 Out of school children from Gopalan slum are eager to go to school. Pic: Murugaraj Swaminathan

What next?, wondered the members of Nallurahalli Rising team. To their surprise, they saw an unoccupied government school building adjacent to slum. Immediately an idea was born: open the school and admit these slum kids for a bridge course!

With some brainstorming sessions and interaction with local leaders and residents, Nallurahalli Rising which is an offshoot of Whitefield Rising, decided to move forward in that direction. A quick survey of the children was conducted and their immediate needs and reasons behind staying away from school were learnt.

Nallurahalli has two government school buildings. One of them, an old higher primary school, has 250 children from 1st to 8th standard studying in it. Another higher primary school building was constructed five years ago, at a distance of about 1 km from the old school to accommodate more number of children. Though there are eight classrooms in the new building, the school was not shifted to the new premises and it continues to remain unoccupied. 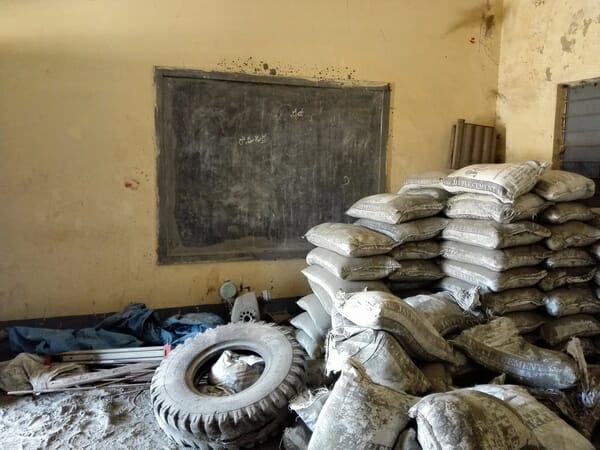 The things that Education Department did not do

Several strategies have been adopted in Sarva Shiksha Abhiyan (SSA) to admit never-enrolled and dropout children to schools. It includes, conducting bridge course, organising tent schools, mobile schools and feeder schools. The Education Department has to conduct drive from time to time to find out of school children and admit them to neighbourhood schools.

The reasons behind not shifting the school are several. Villagers say that the land surrounding the new school building is facing a dispute due to which a compound wall could not be constructed. Hence, the children were not shifted from the old building.

However, Block Education Officer of Bengaluru South Zone 4, Ramesh is of the opinion that since the new building is located at a distance of 1 km from the town, it is not convenient for primary school children to walk up to the school. “It is not really safe to walk on the main road and parents may not even be ready to send them,” he says.

The unoccupied school building was used by local builders for dumping cement sacks, blocks and debris inside the classrooms till recently. 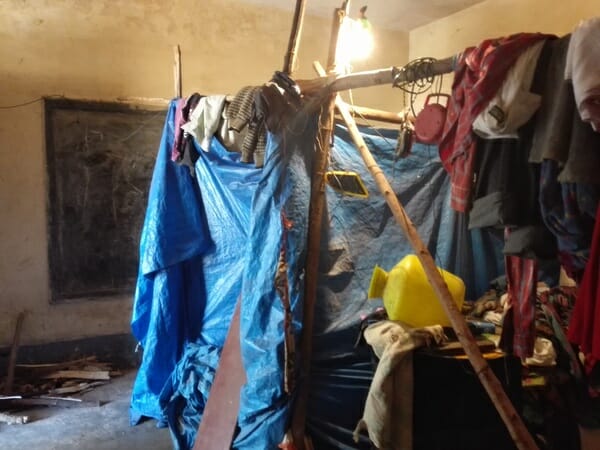 A classroom inside the Government Higher Primary School, Nallurahalli, used as a shelter for consturction labourers. Pic: Murugaraj Swaminathan

As a first step, the community members convinced the local contractor who had dumped materials inside the school to vacate the place. He obliged. Now the school campus has been cleaned and is getting ready to welcome children.

The plan to give a school to slum children

Understanding the situation, Nallurahalli Rising along with organisations like Samruddhi Trust, Rotary Club, Sai Trust mooted a plan to start a bridge school for migrant children. Since the school lacks basic amenities such as toilets and electricity, the community members decided to prioritise the needs. The novel initiative has been now named as Gopalan Labour Shed Children’s Welfare Project.

Murugaraj Swaminathan who is spearheading the initiative, informed Citizen Matters that the project was initially assessed for about 50 children from Gopalan slum, but now, they are also planning to accommodate another 40 children from a slum in the neighbouring Ramagondanahalli village.

“We have submitted our proposal to the tahsildar, who has to forward the proposal to the Education department. We have informally discussed about our plan with the BEO and he has agreed to support us. Breakfast is being served to these children from July 31st and we have obtained permission from BBMP and School Development and Monitoring Committee (SDMC) for the same. We will start the bridge course in another two weeks, soon after obtaining required permission,” he said.

Providing electricity connection, water and toilet facility is the priority before the community. Murugaraj says that the Rotary Bangalore IT Corridor is sponsoring toilet construction and the work has already begun. Work on electricity and water connection too is in progress. Samruddhi Trust will look after the education part and Sai Trust has agreed to provide breakfast to children for next three months. Corporate firm Tesco has come forward to paint the building. People for People and Whitefield Ready too are supporting the project. 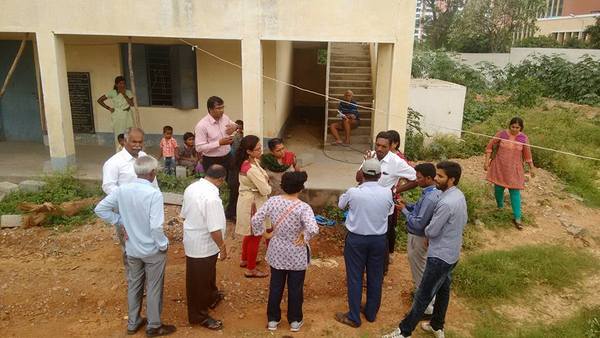 “Our plan is to understand and address the immediate needs of these children in next three months. We would evaluate the kids and begin a bridge school on the premises to get the kids ready in one year for regular schooling,” Murugaraj said.

The community also intends to provide lunch to these children on daily basis, develop a playground, plan for health camps and libraries.

What do slum-dwellers say?

Most of the residents of Gopalan colony are migrant workers from Northern Karnataka and neighbouring Andhra Pradesh. They pay a monthly rent of Rs 200 to Rs 500 to the private landowner (Gopalan Enterprises) for allowing them to stay. When this reporter randomly spoke to some of the slum dwellers and their children at Nallurahalli, they expressed their eagerness to send their children to school.

Jayamma who has migrated to the colony from Chinthamani says that she has not sent her three children to school as the government school is located a kilometre away from their tent. “The road has heavy vehicular movement and I did not want to take the risk of sending my children to school by foot. But, I will definitely send them to school if the adjacent school building opens,” she said. She is the resident of Gopalan colony for the last three months. 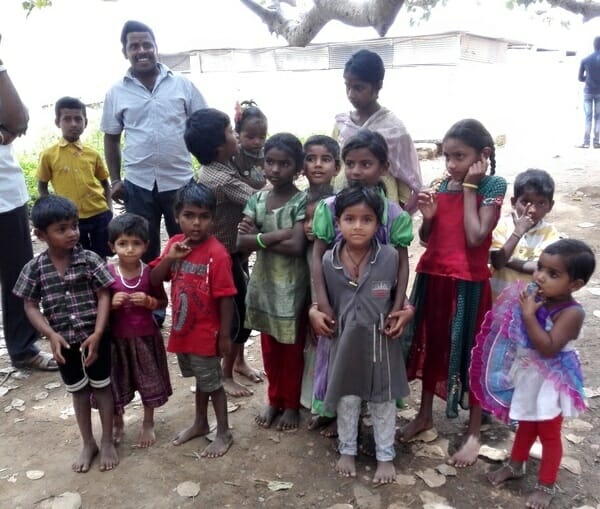 Thanks to the attention given by the citizens of Nallurahalli, these kids will now get a school. Pic: Murugaraj Swaminathan

12-year-old Manjunath has a responsibility of looking after his baby brother when his parents are away at work. This has prevented him from going to school. “If the neighbouring school opens, I will attend the classes. I am excited,” he gleefully says.

Since most of the children above the age of six stay away from school to look after their small siblings, Nallurahalli Rising is also considering making provision to attend to small children so that the elder boys and girls can sit in the school hassle-free.

Education Department yet to grant permission

When asked about the initiative, BEO Ramesh said that he had visited the school last week and was informed about the plan. “The team is yet to get official permission to start the bridge school. Education Department will grant them the permission if the school has basic facilities like toilets and electricity,” he said.

We asked the BEO why didn’t the Education Department take notice of those children before, while a community was easily able to trace them. In reply, the BEO said that though the Department knew about the slum, it was quite difficult to trace out-of-school children living in slums as the children often drop out as families move between work sites. “They stay in a location for three to six months,” he said.

In this Bengaluru slum, 6500 people use 10 toilets at dawn
Malleshwaram slum demolished to build a park
Hundreds of Ejipura slum residents thrown out of homes
No new year in Bengaluru’s water starved slums

In the name of development

Unrestrained construction has destroyed farm lands and water sources around Sarjapura while introducing safety and connectivity problems. But neither the government nor the real estate developers seem to care.

I have friends who neatly wash, iron and line up the kid’s clothes in labeled hangers saying Monday, Tuesday, Wednesday.

The memorandum by residents of Whitefield seeks solution to traffic bottlenecks in the area.