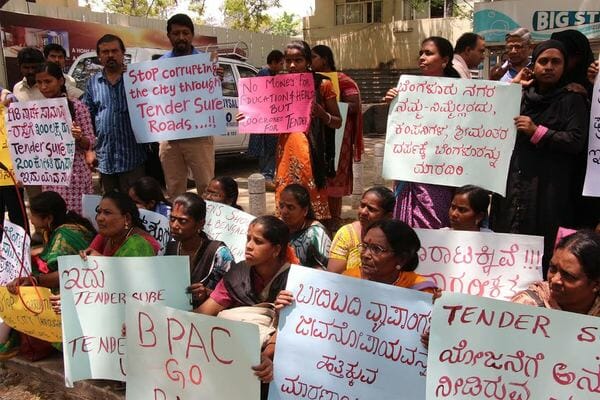 On April 9th, the Forum for Urban Commons and Governance organised a protest in opposition to the Tender SURE project, citing that there it was approved and being implemented in an undemocratic and unconstitutional manner. Their protest was a demand for the democratisation of governance, and to build a socially that was just, and inclusive. Citizen Matters spoke to Meena Artwani, a member of the group to understand their concerns. Here is the text of the interview:

Who are the organisations and individuals that are part of the Forum of Urban Commons and Governance?

The Forum for Urban Commons and Governance is a new network, an informal group that has been formed to protest against the Tender SURE roads. There are many individuals and groups under this. Some of them include the street vendor unions, garment unions, organisations working with human rights etc. I don’t want to mention the names, as they might be targeted.

What are your main concerns against the project?

The whole approach is problematic. It has forgotten the constitutional mandate. It had to go through BBMP, and in this case, it has not.

If it has not gone through BBMP, how did they get approvals for the project?

They met the Chief Minister at a breakfast, made a presentation and got it approved. Rs 200 crores  were approved then and there, without any consultation with the corporators. Only the BBMP commissioner was there and he is not the elected body.

Half of it is coming from BBMP. There are many discrepancies in how the tenders were called. Only one (firm) applied. There is conflict of interest. Many other things…

They have to hold public hearings, let people know what they are doing. How is the money being spent? What are the designs they are talking about, are the designs certified? Who decided that Bangalore needs such roads? Did people ask for it? Who are the people who want that road? Wider footpaths for what?

We are for pedestrian-friendly roads. We want decent footpaths. But what is happening underneath the footpaths? That is the main question.

Ravichandar (of Bangalore City Connect Foundation) has put out this FAQ of sorts that addresses a lot of the concerns that people had. What do you think about the response?

I have not read his response and I am not interested in it. These are the main concerns: why were people not informed? They have to follow a rule when a project his happening, they have to display the boards, how much they are spending, when has the work started, when will they finish it. None of this has been informed.

Ask anyone about it and they say it’s the BBMP that doing the work. But really, is it the BBMP that’s doing the work? People have been kept in the dark. They have a vision and they seem to think they know what is best for Bangalore. Do they think that nobody else has brains? Remove the BBMP experts, the engineers. Why don’t they themselves sit in their post?

What are your concerns about the design?

The width of the footpath is not according to the pedestrian study. They have not studied how many footfalls there could be. They want to accommodate the OFC companies below the footpath. In the minutes of the meeting, only one pipeline was approved, and Swati (of JUSP) said, “No, no, we need four.” They are looking very far. They are saying that the Floor Area Ratio (FAR) ratio will increase, there will be buildings that have 30 floors, and that they are accommodating for that.

Are you saying that this is not going to happen in the near future, but they are planning ahead for the many years from now?

What is their argument for it – the longevity of the roads? It rained a few days back. You should go check St Marks Road. Before the CM came, they filled up the potholes, they fixed a few tiles that had fallen. What are they talking about?

So if they had to make changes in the design, what would be ideal?

First of all, who are they to give us designs? Who appointed them as consultants? Are those designs approved by some competent authority? We have IRC standards. For many years now, BBMP has been making roads. That is their argument – we are giving a different design for the roads. When BBMP engineers gave them suggestions and told them that they were not building the roads as per IRC standards – this is documented in the minutes – they said, “You don’t have to give suggestions. If you give suggestions, it won’t be a Tender SURE road.” Look at their attitude and arrogance.

You’ve said that the Tender SURE road costs 250% more than the regular cost of roads. Their argument for this is that these roads will not need to be maintained for six to ten years, unlike the BBMP roads which need constant repair.

We are not questioning the technicals. What we are questioning is the governance and justice.

Ravichandar in a news interview stated that they are experimenting and the end result might be successful or might not.

He, in fact, called out this out specifically in his response to the criticisms as well…

You cannot experiment with public money. You cannot play like that.

While you state that it is not necessary to keep so much space aside for pedestrians, Ravichandar has said that in the future, there will be more pedestrians and cyclists using the roads.

Now they want to make the Metro work. So when they have buildings with 30 floors coming up, they will be several companies there and people will use Metro. They want to push people to come in there, shop there, everything else…  Just to show Metro is successful.

See there are private companies with OFC cables, who have been penalised for not paying rent. Now, they are just hiding under. Now who will see what is underneath? In the BBMP minutes, at the meeting which is chaired by the Chief Secretary, the Chief Secretary has told BBMP engineers not to get involved. When you talk about the 74th amendment, roads and bridges are the obligation of the BBMP. That is their work. You cannot force BBMP not to monitor it.

Are there any corporators supporting the project?

Street vendors were not consulted. The road in front of UB City is considered as a model road for Tender SURE. Right now, BBMP is not even allowing pushcarts. So you’re actually violating the livelihoods of a certain section of society. The trees are haphazardly cut. In the minutes they have said, wherever there are obstacles, you can cut it. So pedestrians will walk, but there won’t be any shade. Is that the kind of planning they’ve done? On the pretext of greenery, they have small bushes and herbs.

As per Ravichandar’s article, there are European studies that say that making streets pedestrian-friendly could increase the business of traders by two or threefold. Do you think they will allow street vendors on these roads?

Even now they are not listening to the traders. I cannot name them. But in front of Koshys they have changed the design some 300 times. Someone called the Chief Secretary to find out what was happening; he personally called them and asked them not to talk about the design. They are scared that their trade licenses will be curtailed. Is that what you want to do?

Government listens to only one section of the people. And the others, the people who are suffering… the government does not listen to them.

On this note, you had mentioned that garment unions are also protesting. How are they affected?

They are affected because the money that is being spent here could have been spent on them, on their welfare. When the government said they will have a BOTC that will fetch them from one place to another, that makes more sense to them, rather than spending so much money on the roads.

Finally, what are you plans to follow up on the protest?

We want the government to stop this before taking up any other phase. Consult people. What do people want? What is their vision for Bangalore? Only then go ahead… make some design changes.

We want good roads. We are also pedestrian-friendly, we are environment friendly. We want ecology to thrive. But we cannot understand this expensive road where one kilometre of the road is costing 10 crores!

Why are the footpaths wide on Tender SURE roads?
What’s this Tender SURE all about?
Here are the serious issues about TenderSURE you should be worried about!
NBF asks BBMP to desilt drains, repair footpaths and expedite TenderSURE

What road size will ever be enough?

Laws on sex abuse have loopholes that let off the guilty: Vinisha Nero

She is the lone woman MLA from Bengaluru in the last term, who was nominated from Anglo-Indian community. Vinisha Nero talks about her role and her work and offers insight.