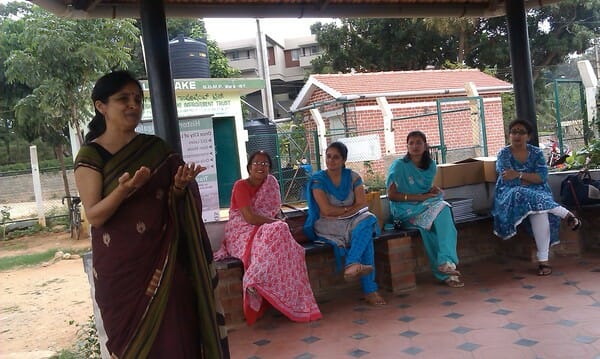 Cracked footpaths; unattended garbage on the street; destruction of roads due to delayed Metro work; high water prices – all these have left Bangalore in chaos.

With the sun peeking out from clouds every few seconds and cold wind sending shrivels in the body, many Bangaloreans joined the discussion on Puttenahalli Lake premises, on the issues that concern a Bangalorean, but are ignored as the city tries to catch up with development.

Born and brought up amid the greenery of Bangalore, Bhargavi S Rao, Trustee, Environment Support Group (ESG) recalled the old city whose roads were embraced with thick canopy of trees and markets and temples were places to socialise. She said: “Definitely the city is no longer the way it was.”

Laws and policies are all in papers but implementation is the place where we lack. In the fight for the rights of Mavaliipura against the rampant dumping of garbage, High Court ordered that there can be no encroachment and no dumping of garbage, and committees should be formed to look after the segregation of garbage at source. But all remain in the books of law, unheard. Most of the policies drafted by the government are to benefit the rich than the poor.

“There are major loopholes in the groundwater policies,” said Bhargavi. The policy charges a mere Rs.2,500 to dig a every bore well.  Bhargavi points out, “A builder who earns crores of rupees, why will have problem paying Rs. 2,500, five times? It is hardly a small pinch to his pocket.”

Policies are more “lobby centric,” said Bhargavi, referring to the clearance given to the automobile companies in the state. She feels at present the city needs to go green and promote the use of cycles than automobiles.

Tracks should be maintained only for cyclists unlike cycling roads at Jayanagar which are used for parking. Audience agreed with Bhargavi that government should create more such lanes and also ensure safety of the riders.

Lack of response among youth

Participants felt that today’s youth lack this perception and the sense of belongingness to the city. Kathik Hebbar, classical vocalist and research scholar, was the only representative of the younger generation to attend the talk. He pointed at increasing insensitiveness and ‘Chalta Hai’ attitude among the young generation.

He pointed to transsexuals who occupy a considerable part of the population of Bangalore. They are living a life of no job, no dignity, with no respect from the people surrounding them. Even when there are policies and laws to cater to such problems of the marginalised people, implementation never takes place, he noted.

Government had initiated to create ramps for the physically handicapped people. But these ramps are built without giving any thought. “A ramp built at Yeshwantpur station is at a height of approximately one foot. How will  a person sitting on the wheelchair slide himself on to such a ramp?” he asked.

Bhargavi reflected on the rat race of the countries all over the world for achieving millennium development goals. These goals have become city-centric and fragmented across India.

She criticised, “These goals have nothing but widened the roads and cut more trees and therefore coined a fancy word, ‘sustainable development,’ but who has witnessed it?” she asked.

She acknowledged a young aspiring journalst, Pramukh Raghunandan, who interned in Indian Express and died untimely, for throwing light on these issues that affected the society. Unlike the other young generation kids who talk about gadgets and alcohol, he had his own perspective of the dying city that lost its vendors and markets to the malls, lakes to the drainage and  trees and drainage systems to the residential or industrial area.

The talks were inspired by the writings of late Pramukh. His proud parents Rohini and Raghunandan with the help of Bhargavi have complied Pramukh’s articles into a book ‘So The City Echoes.’ This book not only talks about Pramukh’s concern over the city but also the experts who have known the city for long.

The session was one of the first series of talks to be held every month at Puttenahalli Lake with the association of Puttenahalli Neighbourhood Lake Improvement Trust and Saaphalya Pramukha Trust.

‘Wall Street’ is predictable, ‘Pranchiyettan and the Saint’ is the thinking man’s comedy

Dry waste collection system started in January shuts down in September, derailing entire waste management plans in the area. Who is behind this?

All you need to know about Ward 190 – Mangammana Palya

If you are a voter of Mangammana Palya ward, here is all that you need to know about your ward: Who is contesting, what are the problems, how has the BBMP addressed them in last five years.