If the namma Bengaluru’s commuters were asked to ‘red flag’ a few of the city’s roads, the chances are that Suranjan Das Road would be among the top three. This 3.95 km ‘nightmare’ as commuters call it does more than connecting Old Madras to the Old Airport Road. It is the exit road for all the areas around it like Jeevanbhima Nagar, Thippasandra, B M Kaval, C V Raman Nagar, Kaggadasapura and Vimanapura. The road also has on both sides private companies, public sector establishments and educational institutes and therefore has thousands of commuters converging in throughout the day.

The project was finalised in 2006 with the three stakeholders – BBMP, the Hindustan Aeronautics Limited (HAL) and Bagmane Developers Private Limited signing an MoU. BBMP and Bagmane were to bear the cost on a 75:25 ratio and HAL’s involvement was limited to the provision of land. The MOU guaranteed an upgraded four lane road in ONE year. 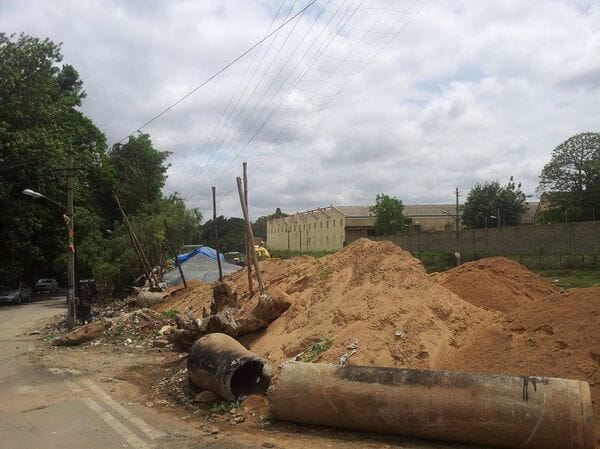 However, for the past eight years citizens have been listening to same excuses reflecting the incompetence of BBMP and lack of political will to see the project through. It comes as no surprise that the trees were the first casualties. Beginning as early as 2011, about 104 trees were axed, even before permissions from BWSSB, HAL and other service providers were in place. Today the 8-crore project cost has escalated to 15.75 crore and it is still a long way from completion.

On several fora, citizens have raised issues not only of the inconvenience caused but also about the widening plan itself, for example the exit gates and ramps of some establishments open out onto the main road or the number of roads criss crossing the stretch will not aid smooth flow even if the road is widened. With suggestions falling on deaf ears, citizens’ frustration still continues. An exasperated commuter Rajeev Ravindranathan questions the planning that is done in his SuranjanDasRoad chronicles. 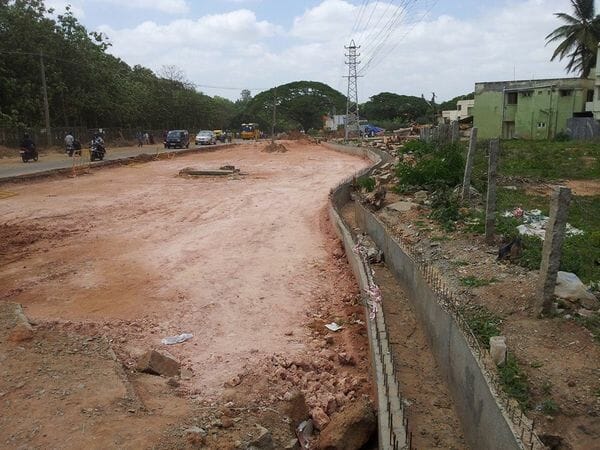 “A result of a BBMP factfinding mission to Brazil perhaps, here is the Anaconda inspired drain flanking the eternally-under-construction SuranjanDasRoad. Because water and traffic do slither don’t they?” asks one of his posts.

“The SuranjanDasRoad chronicles continue. Here’s more evidence that BBMP’s engineers have a fondness for moles and other subterranean creatures. Pay attention to the carefully crafted mounds of mud and debris and craters and tree carcasses. By the way, 10 bucks for whoever spots a traffic lane here. I nearly got run over taking this pic,” says Ravindranathan in his post.

The closest to a response that a citizen has gotten to a response is one from BTP saying they would ask the area Inspector to look into the issue. But there is little the Traffic Police can do if there is no road to commute on and thousands of frustrated commuters trying to reach their destination. The muddle the BBMP finds itself in right now with all the other city issues, one can only wonder when commuters on this stretch will be a relieved lot.

25 years of Lokayukta: Powerful, yet powerless

Justice Santosh Hegde gave some tips on how Lokayukta can take action on corrupt officials and ministers under existing laws.

Catch up on news from the city over the past week, in our roundup.

Enjoy the music season in Bengaluru with jazz and rock

A beautiful rendezvous with music, culture and art with the onset of Bengaluru Habba. What’s on at the Jazz and Rock fest at UB city.