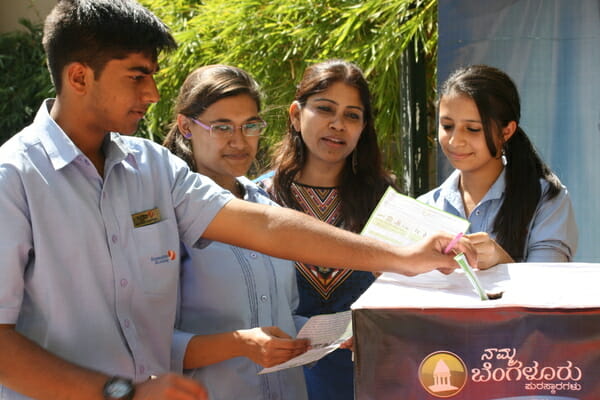 What does BBMP stand for?

What’s so unusual in this revelation? Well – nothing except that this came from a bunch of well meaning students in the prestigious Inventure Academy.

If you thought today’s youngsters don’t care enough for their city, think again! They are aware of their surroundings and have kept their eyes, ears, heart and soul open in either contributing towards their city’s development or joining hands with those who are working towards the cause. This was a message that they resonated at the interaction held at their school with the celebrated journalist and quite an avid lover of students herself, Vasanthi Hariprakash. Being the Namma Bengaluru Awards Jury Member, Vasanthi was there to help students to nominate their Unsung heroes for the 5th Edition of the Namma Bengaluru Awards.

When asked if they believed there were people in the city who did extraordinary work, the students unanimously echoed that they saw through their daily day to day affair so many people going out of their way to make extraordinary contributions in their neighborhoods and school.  Being a journalist truly, Vasanthi was quick to question what good work meant to them and what they thought was the need for good work in the city. From adopting stray dogs, to helping keep streets clean to outbound activities that help poor, the students gave her a variety of examples, proving that they noticed all good deeds in the city.

They added the good work in the city is usually done not for any monetary benefits or for claim of fame or expecting anything in return. A student, Ishi, added that her neighbour who happens to be her mother’s best friend adopted an abandoned two-day-old baby when she saw no agency offer help to rescue the baby, something that she vouches not many do and calls it act of extraordinary courage!

When asked by Vasanthi what they thought was a great way to help the citizenry who take ownership of the city, they gave a plethora of ideas from social media promotions, to volunteering on ground and financial contributions, the eagerness to partner and resonate good work for the betterment of the city was evident.

The students were delighted to know that they could nominate anyone for an award exclusive for their kind of work, the work that only believes in helping the city move forward without any expectation of name or fame attached to it. The students nominated their unsung heroes and are excited to take the idea outside their school and go on a mission to help identify heroes in the city.

About the Namma Bengaluru Awards

The Namma Bengaluru Awards aim to recognise and appreciate the ordinary citizens of Bengaluru for their extraordinary works. These awards provide an opportunity to the citizens to thank the unsung heroes of Bengaluru. These unsung heroes have made a huge difference to the city by helping their local communities and bringing about changes to improve the conditions of the city.

Over the last four years, The Namma Bengaluru Awards has discovered 46 extraordinary individuals and organisations who have taken it upon themselves to make this city a beautiful home for all of us.

Heroes such as T. Raja (Awardee 2010), an auto driver who is the hope for the destitute in the city, Manivannan an IAS officer who has revolutionised the way a particular government sector functions, The Puttenahalli Neighbourhood Lake Improvement Trust formed by committed citizens of the neighbourhood that helped revive a dead lake are all stars that you helped us discover in the past.

How the Award makes a difference?

The Awards present a unique opportunity for every citizen in Bengaluru to express his/her gratitude to fellow citizens who have contributed to the city and made a difference to their local communities. These awards are a perfect platform for citizens to say ‘thank you’ and celebrate the services and contributions of those individuals and organisations – small and big – who have enriched their neighbourhood. These awards are a part of the endeavors to instill a sense of civic pride among the citizens, thereby encouraging them to serve better and hopefully emulate many more such individuals to make meaningful difference in the lives of fellow citizens.

The awards are presented along with a cash prize of Rs. 1 Lakh. Each of the nominees and awardees are given wide media attention helping them reach out and spread and highlight their work. We believe in hand-holding our winners beyond the awards. Hence we have partnered with Ashoka Foundation India, Bangalore Cares and Samhita who help mentor and scale up processes for our nominees and awardees on request.

In its fifth edition, the Namma Bengaluru Awards invites you to nominate your heroes for rendering extraordinary services to the city. Help us discover those who make a difference to our city!

Nominations can be done online at www.nammabengaluruawards.org or through the facebook app http://goo.gl/XTpbNK .

Nominations forms can be picked up from select outlets of Foodworld, Cuppa, Café Coffee Day and Ammi’s Biryani. The forms are also available at the BBMP Head Office, Zonal Offices and All ARO – Sub Division Offices.

To know more about the awards, watch this:

About Divya Unnikrishnan 4 Articles
The author has not yet added any personal or biographical info to her or his author profile.

Are our heritage buildings vanishing right under our nose?

A recent INTACH study showed that almost 45% of Bengaluru’s heritage buildings have been lost to development. So what can be done to preserve our colonial inheritance?

Can RWAs ban pets, feeding of strays during COVID?

Stray animals and even pets have been mistreated due to fears that they will transmit COVID. But a recent government circular clarifies this is illegal.

A Bangalorean visits the Lalbagh Flower show and finds much joy and photo ops.