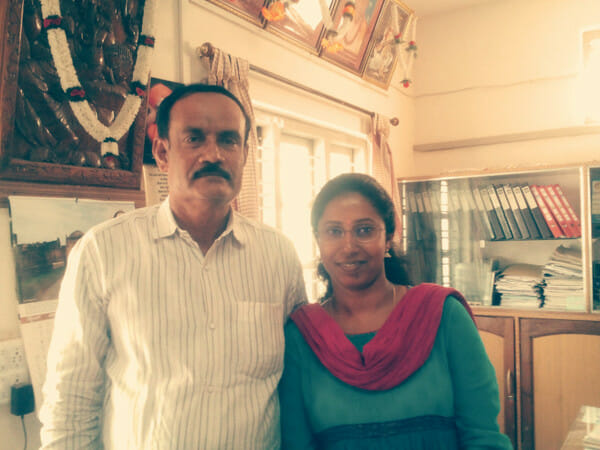 Can government schools beat private schools in facilities? Yes, if there are people willing to lead a school in that direction. Head teachers in the schools are those who have such capacity. Here’s a case of a school near Devanahalli’s Kempegowda International Airport – Government Higher Primary School,  Hunasamaranahalli, Bangalore North – that got State Government’s Model School Award in 2015. The head teacher got national award for best teacher in 2012.

Padma Priya, a Radio Jockey at Radio Active 90.4 MHz, shares her memories of the school that she studied in, that has become a model now for other government schools, and an interview with the man behind the school’s upliftment, ‘Bhadrayya sir’.

My fondest memory of this school was that it was located in an open field in Bangalore North. We used to walk about 4-5 kms one way to reach the school. The building was made of red stone, we had no benches, we used to sit on the floor. Tiolet breaks, were an excursion in itself, as we would go to the trees, laugh and play around.

However, we did not care… When it came to academics, I first learnt English and Hindi Alaphabets here. Mathematics was a nightmare though, as Bhadra, my teacher was a tough master. Sports Day was another celebration. Schools from neighbouring areas would participate, and that was my first tryst with games like Kho-Kho and Kabbadi”.

I only studied there for three years and completed my Grade 6, 7 and 8, after which I shifted to another school. Things changed, and I went on to complete my post graduation and began work as a Radio Jockey at the station. Even though I stay close by to the school, life took a different turn, till one day I heard from my neighbours that my school was awarded the Model School Award by the Karnataka State Government and Bhadra Sir, as we would address him was awarded the Best Teacher National Award.

I had to go see the school… Going back was nostalgic. The school had changed, infrastructure had improved. Bhadra Sir, now the headmaster, had tears in his eye, after the interview. And so did I… Listen to the interview and share your feedback.