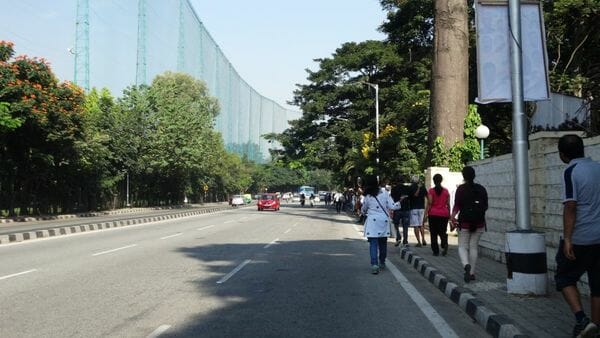 The steel flyover will pass through this road. Pic: Shree D N

To all those who insist on going ahead with the steel bridge… in the hope that good sense prevails:

The issue regarding this bridge is becoming more heated as the days go by. As I see it, the matter will get uglier as both sides have their view points and arguments in place. So the best way to resolve this is to throw up all the pros and cons and see which comes out on top!

The bridge will cut the journey to the airport and from North to South by 20-30mins… one for the pros.

But that is only during rush hours!

I live at Jayamahal, and it sometimes takes me 45-55 minutes to get to MG Road during peak traffic time. Queens Road alone, which is just 1 km long, can take 20-30minutes! Indiranagar 100 feet Road from CMH Road to the Old Airport Road can take 30mins during the same rush hours. Do you plan to build steel bridges there too? If you do then you will get people reaching the next road very quickly but that road will then turn into a car trap! In the same way, building the bridge as planned will create an even worse bottleneck further down at the Hebbal Flyover which is anyway always jammed and that will negate any time you plan to save.

But here are some other points that have obviously not been considered… or maybe they have, but have just been ignored.

1. To build any bridge in the middle of the city would mean boring very deep into the ground. It is common knowledge that there are no proper plans of where water and sewage pipes and electric cables run. Each disruption can add 2-6 months to the completion of the project. Do you still stand guarantee for the cost and time frame for completion?

2. You say that 800 trees will be cut but you will replace them with 10,00,000 trees! Where will these trees be planted? They can only be planted outside the city. These saplings, if given the chance to grow, will take at least 12-15 years to grow. Bangalore is known famously as the “Garden City”… the Ministry of Tourism advertises it as such. But sadly, this will be no more. Our heritage will be lost forever. How do you plan to restore that?

Besides, plants need a plentiful supply of water to grow until they catch root. Unfortunately, water is one commodity we don’t have.

3. But I say that there will be many more than 800 trees that will have to be brought down… alongwith lamp posts, traffic lights, internet and TV cables, phone lines, traffic islands and even some private structures just to bring the large sections of steel into the city. Our roads have not been built to take the burden of super large trucks carrying extra heavy loads… they will be totally pot-holed and demolished! If iron sections are being brought in from Sankey Road, the Windsor Manor Bridge is too low and will have to be brought down. If the trucks need to go over any flyover, it will either come down with the load or get very weak and will need major repairs. Have you budgeted to put all this infrastructure back in place?

4. Then there is the dilemma of where these huge sections of steel will be stored. I can only imagine that plans for further destruction of Palace Grounds, Cubbon Park, the Race Course and/or the Golf Course have already been drawn up!

5. Let’s just say that the bridge does come up… there will be equal or more traffic under it than on it. By sinking huge support girders into the road below you would have reduced the size of the motorable road below! This will lead to terrible traffic jams under the bridge, thus increasing the pollution and smog levels. Add to this the lack of airflow and the heat radiated by steel above. It will be at least a serious health hazard, if not a death trap!

6. During peak traffic hour there are two main points of constriction on the Airport Road. One is the Hebbal Flyover and the other is the long queues that form at the toll booths. From what I’ve read, you wish to charge a toll to recover the cost of this structure. This will cause traffic jams on the bridge. Does that not defeat the very purpose of building this bridge??!

7. Here is an example that you should consider… Each year New York City spends an average of US$5 Million on maintaining each of its 1-2km long steel bridges in the interest of public safety. Every 10 years each bridge is closed for safety inspections and overhaul. The cost of this is about US$20-50 Million. The Manhattan Bridge had been relatively neglected and when it was 70 years old they shut it down to replace weak sections, worn out welds and lose bolts. They estimated the timeframe to be 3-5 years and a cost of US$300 Million. The job took over 10 years and cost US $752 Million to complete. Has this contingency been taken into account at all?

Incidentally, the cost of repair as I’ve mentioned was in 2003!! Today it would probably cost twice as much.

8. Consider an accident on the bridge at 15-20 meters above the ground level. On a normal road all we are capable of doing is moving the vehicle off the road till the police arrives. I wonder if you realize that moving a car off the road can be quite a long drop from a bridge!! We have yet to teach drivers what to do when they hear a siren! Are there any plans, or more importantly funds, to maintain a permanent emergency team on site??!

Conceived in the year 2000, the plan to have a 4.1km bridge in Peddar Road from Girgaum Chowpatty to Haji Ali Junction has witnessed various flip-flops and stiff opposition from the residents, including Indian Nightingale Lata Mangeshkar, with the state aggressively trying to execute the project.

Owing to the opposition and subsequent protests by locals, the cost of the project had risen from Rs160 crore in 2009 to Rs 380 crore till the last assessment.

Moral: It helps to listen to the voice of reason… especially when volumes are so high.

So now weigh the pros and the cons… There are some who are pros at being cons and will argue till the cows come home, but the rational, level headed people amongst you will agree that there’s more that can be done with ₹1,800 crores. We have many brilliant engineers, town planners, architects, etc. in Bangalore. Why not listen to what they have to say? This is not just about trees anymore… It is to do with the future of a heritage city that is on the verge of destruction, the sight of which will make its original planners cry!

There may be a lot we desire… but how much do we stand to lose in the bargain??! What we lose today, we will never be able to regain… EVER!

Please allow more time to find a proper solution to the traffic problem. Be more inclusive and allow more qualified minds to come together. The few immediate solutions that I, in my humble capacity, can think of are:

1. Instill a sense of lane discipline by empowering the traffic police to fulfill their duties. Especially for autos, taxis and two-wheelers. This will ease a lot of the stress.

3. Re-audit the cost incurred in building the Airport Road and do away with the toll booth. It’s probably fully paid for by now!!

4. As much as possible, plan flights for the early morning or late evening. They are very convenient!!

Please say NO to the STEEL BRIDGE!!

The opinions expressed here are author’s own. Citizen Matters as a news analysis website, makes an attempt to present all sides of the issue, but does not endorse or reject them.

About Pallon Daruwala 1 Article
The author has not yet added any personal or biographical info to her or his author profile.

The signal’s coming in very clearly; if you are a mother you cease to have claims on public space. If you are crazy enough to want one then you are on your own.

A walk for Bengaluru’s special children

A walkathon for special children raises awareness on Cerebral Palsy. A slide show of the event.

T P Kailasam, the one of the best Kannada humour writers, “unemployed and unemployable”, remained true to his passion.