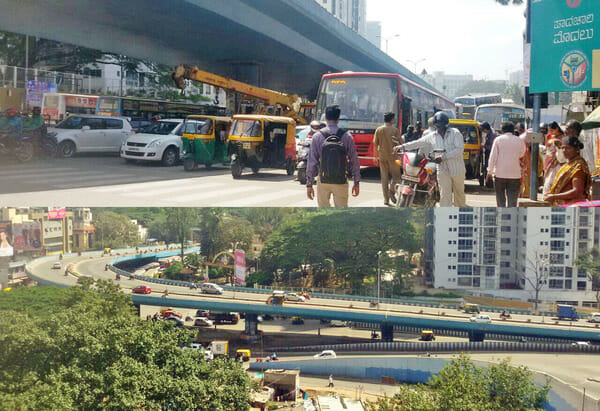 While the traffic comes to a grinding halt under the flyover after Mysore Lamps near Yeshwanthpur, the flyover has little traffic, even during peak hours. Pic: Rajshekhar

Work on much-needed foot overbridge yet to start

The Yeshwanthpur railway station is a mere 200 metres away from the Metro railway station. However, moving between the two is difficult, owing to the absence of a foot overbridge; and for those commuters with luggage, even more so.

The entrance to the Metro station, located just as one exits the railway station, is closed at all times. There is also a complete absence of signboards, which could otherwise direct passengers.

The overbridge which could connect the two stations continues to exist only on paper. Though nine months have passed since commercial operations were started on Reach 3 and Reach 3A, it is only now that BMRCL has announced that they are likely to start work on the overbridge.

Once the overbridge is functional, it can save considerable time for passengers who alight from Yeshwanthpur and then would want to take the Metro services to reach Rajajinagar, Malleshwaram or Peenya. It can also prevent unnecessary congestion at the main entrance of Yeshwanthpur railway station.

Railways promises help; BMTC yet to grab the chance

Anup Dayanand Sadhu, Senior Divisional Commercial Manager of South Western Railways (SWR) said that BMTC is yet to approach SWR on this issue. He added that SWR would extend support in addressing connectivity issues between the TTMC and the railway station, if BMTC approached them.

Dedicated buses to the railway station, along the lines of the service to the City railway station in Majestic, could help the commuters greatly. Indian commuters typically manage to find a shortcut to get anywhere and it is the same to get the railway station as well. This creates additional security issues at the stations and can be avoided with a little coordination between the transport organisations.

The Metro station at Sandal Soap factory is a mere 200 metres away from the TTMC. However, passengers find it difficult to make their way to the station because of the high volume of traffic on the road. The short distance also means that it does not make economic sense for the passengers to board an auto or bus, to get to the station.

The railway station at Yeshwanthpur has emerged as major junction and a coaching terminal for SWR. The railway station sees a footfall of one lakh passengers daily and has a total of six platforms. Every day, a total of 82 trains (41 pairs) either pass through or originate from this station.

For a station of this size, the premises are relatively clean and there are proper drinking water facilities available, especially compared to the City and Cantonment railway stations. It also has battery-operated cars for the elderly, and ramps for the physically-challenged.

However, there are a host of other issues that need to be addressed. There are far too many unofficial exits and entrances. There are no metal detectors at the entrance. While there are CCTV cameras on all the platforms, luggage scanners are absent. There are very few policemen on duty as well. All of this could lead to security concerns.

Saurabh Bhattacharya, a management consultant and a resident of Kengeri, has some observations: “People loiter around the station premises freely. The ticket counters are also extremely crowded because of the lack of vending machines for platform tickets.” He adds that security can be tightened through a slew of measures including adequate policing, and luggage and baggage scanners.

Sadhu says that there are plans of having integrated security facilities at both City Railway Station and Yeshwanthpur Junction. Baggage scanners and CCTV cameras are part of the plan. “We had kept the entrance on platform 6 side open to allow goods and parcels to be taken into the station. However, since this poses a security risk, we are planning to close it down,” he adds.

There are a few issues with covered parking, which SWR plans to address by taking over disputed land, which is in front of the railway station.

The roads along the Metro rail network come under the BMRCL. Though it been nine months since work was completed on Reach 3 A and Reach 3, the roads are not in a good condition. The road in front of the metro station in particular, sees a lot of traffic as it is linked to a major National Highway. The poor state of the roads stands testimony to the apathy of the administration, and points to the lack of coordination between BBMP and BMRCL.

Flyovers and underpasses add to the mess

The endless construction of the CNR Road underpass added to the frustration of the motorists in the last few years. While the newly constructed underpass gives the impression of smooth flow of traffic, commuters typically get stuck on CV Raman Road.

Commuters say that the flyover is blocked in the direction of IISc, because of the presence of a signal near MS Ramaiah Road. Most motor vehicles take the illegal left turn to avoid the signal on MS Ramaiah Road. Buses coming from this road towards IISc also struggle to join the traffic coming in from the flyover. This is because of the traffic coming from Malleswaram towards the junction, which occupies both sides of the road. The buses going towards Tumkur Road and Rajajinagar block the free flow of traffic on the flyover, while the narrow railway overbridge adds to the mess.

Had the flyover been extended till the Gymkhana junction, perhaps the mess could have been avoided,. There is the option of widening the road and building an underpass to eliminate the signal. However, this is only possible by cutting through the tree-laden IISc campus.

The Yeshwanthpur Industrial Estate Metro station has exits on both sides of the road unlike the Peenya and Peenya Industrial Metro stations. However, the exit leads customers to badly maintained pavements. Of the two exits on the left side of the road, one remains closed for reasons unknown.

The service road on the busy highway is poorly maintained.  Most exits from the metro on this stretch stations lead to the service road, adding to the unpleasant experience of commuters.

The flyover at Yeshwanthpur has caused more problems than it has actually solved. On an average, it takes a minimum of 30 minutes to cross the two kilometre stretch. The flyover took two years to complete, but even after five years of completion, the situation seems to have only worsened.

The construction of the parallel flyover has added to the mess as well. The first of its kind in India, this flyover was constructed by BMTC to help motorists bypass the two-storied railway station. However, it has not facilitated the smooth flow of traffic.

Yeshwanthpur is no longer the low profile industrial suburb of yesteryear. The locality houses high rise apartments, five star hotels, malls, commercial office space and theatres, all of which exist cheek by jowl. The area has become a preferred location for buying homes since it is well-connected. The presence of a railway station, metro connectivity and the TTMC have only added to the appeal.

Work on commuter rail for Bangalore has also gathered momentum in the last year, because of pressure from citizens forums such as Tumakuru Prayanikara Vedike. New trains have been introduced to Yeshwanthpur, Nelamangala and Hosur; these either originate or pass through Yeshwanthpur.

The Yeshwanthpur railway station could also be used as a terminal for Commuter Rail to Tumkur, Hosur, Chikballapur and Dodballapur. The demand for CRS to Tumkur is likely to gain momentum in the future, because of the smart city project.

In light of all this, it is essential that the various transport and civic authorities come together to solve some of the teething issues which Yeshwanthpur faces. Attention to detail and vision on part of the authorities, could make Yeshwanthpur a truly multi-modal hub.

Here is why Bangalore needs late night transport solutions
Funding Bengaluru’s Suburban Railways: PPP, or public funds?
Metro Reach 3B to be a reality soon: Why commuters may yet not use it

How do those biscuits reach your neighborhood kirana store?

Exploring the intricate distribution system in cities that ensures food, household and consumer products, from biscuits to colas reach the thousands of super markets and stores across the city.

BBMP Budget: what the NGO’s are asking for

The demands are basic. But the fact that this has to be put forward as a demands tells the tale of BBMP’s way of functioning. How many of these demands will be incorporated in the upcoming budget?

Aspirations of the young urban poor: A job that pays well, and has ‘prestige’

With no influential friends or social network and limited education, where do the children of our domestic workers, security personnel or other blue/grey-collared workers find jobs? How often are their expectations being met?