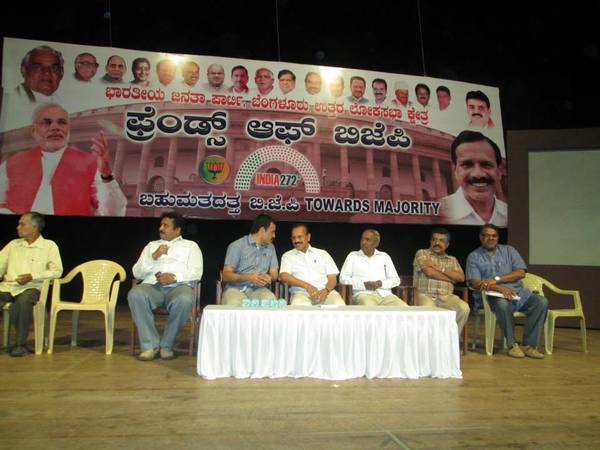 It was a cool Sunday morning, but the volunteers and activists of Bharatiya Janata Party were seen running around with excitement near Chowdaiah Memorial Hall in Malleshwaram.

Even as the curious crowd waited inside the hall for D V Sadananda Gowda (better-known as DVS by those who want short names) to arrive, the now-famous NaMo song, ‘Modi aanewala hai...’ was played on the projectors kept on both sides of the stage. Following this, a five-minute corporate film on the man of the day, DVS was played. When it was half-way, DVS, with his trademark end-to-end smile on his face, entered the hall along with the gang of corporators and MLA Ashwath Narayan — in the same way a Telugu film hero enters the scene.

The film took credit for Bangalore Metro, as DVS was the one who had inaugurated it. Sakala, second Global Investors Meet, Krishi Budget, past achievements and working style as MLA and MP, MPLAD spend etc were projected on the screen to win the hearts of the audience, who were already DVS fans.

The event, by the way, was meant for “invited only,” organised by ‘Friends of BJP.’ Thereby it reduced the chance of participation of critics in the event. Selected who’s who from Malleshwaram were invited — this resulted in a favourable positive environment that can boost the confidence of the candidate. There were only bouquets, no brickbats, to cut it short.

Two sportspersons — Arjuna award winner Honnappa and international Basketball player Gautam — were asked to light the lamp, and the event began with prayer. Kannada Rakshana Vedike chief Shivaramegowda, MLC and ex-film actor Jaggesh, Ashwath Narayan and others were seated along with DVS on the stage.

All for a ‘decisive’ government

Ashwath Narayan in his introductory speech, asked the audience to ask questions to the MP candidate. He apologised for the half-full hall, which was smilingly accepted by DVS. He said the party has a separate manifesto for Bangalore. Explaining that Vajpayee ran the government with 24 parties amid “blackmails” when National Democratic Alliance came to power, the MLA stressed for the need to have a “decisive” government.

Jaggesh who spoke next, said that while other parties have paid audience who don’t vote, BJP has members who never attend meetings but vote in large numbers. This was met with a loud applause from the audience. He demanded that people vote for Modi as “he has proved himself in Gujarat.” The conspiracy theory that some Indians asking the USA not to let Modi in, the usual dynasty politics bash, Congress bash formed the stuff of Jaggesh’ speech.

While this was on, a priest from a nearby mutt was called onto the stage. DVS accepted his blessings, ‘prasadam’ and token of respect gracefully. After this the interaction started.

The interaction wasn’t really much of an interaction. DVS’ trademark smile was hailed by people. Narayan, a resident of Malleshwaram, said DVS looked the happiest politician in India. He wished that the happiness spread across Bangalore. Nagaratna Rao, Vice-president of Malleshwaram Swabhimana Initiative, seconded this, and said both the MLA and DVS were smiling types. Listening to this, both Ashwath Narayan and DVS grinned even more generously. Nagaratna Rao expressed her complete unconditional support for DVS.

K C Ballal, a resident of Malleshwaram for the past 35 years, asked DVS what he would do for Youth. Many others who spoke treated the situation as a win for DVS already, which brought a sense of euphoria.

While sportspersons expressed the need to have wheelchair accessibility and ramps for disabled sportspersons, Bhagwan, a 72-year-old resident tried to question the lack of buses from Malleshwaram busstand to far off places in South Bangalore. This however was immediately snubbed by Ashwath Narayan who wanted the questions to be “focussed only on national issues, not local,” as this was a national election.

Why South Canaraite for B’lore North?

Being the Chief Minister who ruled the state for 11 month 6 days, DVS was the one who took the first step in implementing the controversial Ettinahole project, which proposes to “collect 14 tmc of water from west-flowing rivers on Western Ghats” and divert it to quench the thirst of the plains like Kolar and Chikkaballapur.

Being a South Canaraite himself, DVS lost popularity there because of this project which was opposed tooth and nails by the people of South Canara as they fear that the project would dry up the lifeline of South Canara, Netravati river. Contesting from South Canara or even Udupi-Chikmagalur is a chance DVS cannot afford to take, as the greens are up in arms against the environmental impact the project can cause to the Western Ghats.

However, in this event, DVS tried to brush away the doubts and speculations on why is he contesting from Bangalore North while he belongs to South Canara and was the MP for Udupi-Chikmagalur. “It was not my choice. The party decided it,” he said, explaining how he always obeyed the party’s order right from the days he was a budding politician till he became the chief minister of the state.

“Present MP for Bangalore North, D B Chandregowda’s health isn’t all that well, so the party wanted somebody else here. For me, when I am an MP, going to the constituency, interacting with people etc will be difficult if the constituency is far away if I have additional responsibility. But in Bangalore North the reach is easy because of social media and the urban settings. This was in my mind which I expressed to the party, and the party paid heed to it,” he explained.

Veena Murthy Vijay, Kuchipudi Guru asked what was going to be BJP’s plan for arts and artistes nationally. Sunil, an IT professional suggested that more and more World Bank-funded public-private partnership projects should come to North Bangalore to aid development. Ashwath Narayan immediately hailed this as a “very good question.”

Shankar Rao, one of the audience, said the national policy should be clear enough and sports should be looked after by sports ministry, not by MLAs. (Incidentally, the local MLA Ashwath Narayan happens to show keen interest in funding sports-related infrastructure like gyms, stadiums etc., across his constituency. There was an attempt to convert Vyalikaval Playground into a stadium, which was questioned through a PIL, and the act was stayed by the High Court under Parks and Playgrounds Act.)

Jayasimhan, another retired employee, said that public sector employees are receiving no pension and medical allowances, and demanded that they be brought back. Bharat Kandade, another senior citizen, demanded a national policy on health services for senior citizens.

T K Nagaraj, a resident of Malleshwaram, demanded that there should be “no free schemes from the new government that make the poor lazy, and no wastage of money.” This was met by a loud applause.

Anand, Sankey Park Walkers Association President asked DVS not to leave his voters once he enters the national scene. Vinay, a civil engineering student, said that more research projects and funding is necessary in India, which the new government should provide.

KRV convenor Shivaramegowda supported DVS wholeheartedly. He said a decisive government can solve the Cauvery water dispute judiciously. He felt that more importance should be given to Kannadigas in national level.

Padmanabha Achar, an industrialist, expressed his unhappiness about the dying small scale industries in Bangalore. “What will be your contribution to industries?” he asked. Taking it granted that DVS will win the election anyway, he asked, “What ministry are you going to get?” He also said party-hopping should be stopped by a definite law at the Centre — the audience expressed their approval to this with claps.

A person, who probably did not realise that DVS himself is a migrant to the city, suggested that the migrants to Bangalore should be made to pay extra tax. However he was snubbed mid-way by the organisers. At the end of the interaction, Bhaskar Rao, a 99-year-old resident of Malleshwaram wished DVS all the best by blessing him.

DVS showers the audience with assurances

DVS started his speech by saying he has realised the need for politics to change. “Gone are the days of manifestos and speeches, people should decide what they want and politics should be based on that,” he added. “Development is like a big bullock cart. Both bullocks should be equal and like-minded, only then will everything move smoothly. That is why both of us are smiling. I will support Ashwath Narayan in his mission,” promised DVS.

“For your other queries, I will not reply. You will see how I work. You have seen my rule. I think I have done good. If I win, I will give first preference to your choice. I will be available to you always. I won’t leave you and go away. You should ask me to get your work done,” said DVS.

He explained that a 300 MW solar power plant is being operated on the banks of Narmada in Gujarat, and a BJP government will always be pro-solar. “I will extend my full support to sports. Regarding health services for senior citizens, there is Vajpayee Arogyashree scheme, central schemes will also be given. We will not start any free schemes to people. We are the only party which respects the rights of ex-servicemen and defence personnel,” DVS assured many things in one shot, replying all the questions one by one.

He said his party when in power did not hesitate to supercede Belgaum Municipality when the Karnataka flags were removed and MES activists offended the Kannada spirit. He assured that the interest of the state would be protected if BJP comes to power.

Even as DVS finished his speech, the hall was filled with loud applauses. The organisers of next ‘Friends of BJP’ event frisked him away while all the audience stood admiring him. A closed door BJP Mahila Morcha programme succeeded this programme, and all the men and non-Mahila Morcha members were told to leave the hall.

The journey of waste from homes to landfill