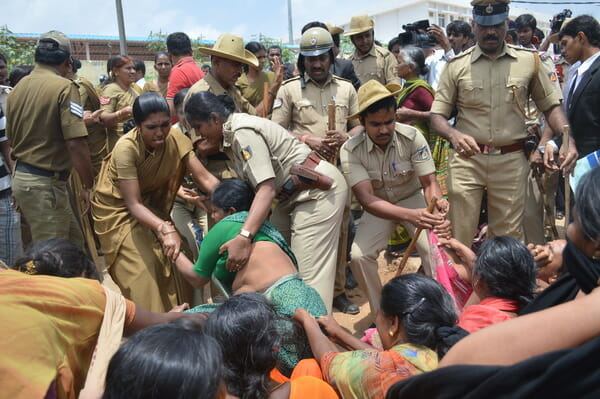 Karnataka Slum Clearance Board (KSCB) invited a flood of protest on June 4th 2014, when it sent the police force to evict the slumdwellers of Jai Bhuvaneshwari Nagar in Bangalore, inspite of a High Court order that stayed the eviction in the past.

Two JCBs and 150 police officials were seen hovering around the Bhuvaneshwari Nagar slum near Rajiv Gandhi Chest Disease Hospital, NIMHANS, at around 8 am on June 4th. At 9 am, they started evicting people. Electricity connection was cut by the police officials. Slum dwellers, members of  Jai Bhuvaneswari Nagara Vaasigala Sangha and Alternative Law Forum stood in front of the JCBs to protest. Around 30 people were taken into preventive custody.

Shekhar, a resident of the slum and an auto driver said, “Why should we leave this place? We have been staying here over 40 years. The place at Kudlu doesn’t even have proper water connection. Schools for our children are here and even our workplace. Building walls at Kudlu have cracks, staircases and doors are broken, how do you expect us to live in such a condition?”

Residents don’t have any title deeds for the place where they stay now, but they used notarised papers from Stamps and Registration Department signed by Sub-registrar of Jaynagar as residential proof. They also have voter id cards and Aadhaar cards bearing the same slum address.

Annamma, aged 42 years asked, “If we were illegal residents of this place, then why did they issue Aadhaar cards and installed electricity meters?”

Ram Kumar, a member of the  Jai Bhuvaneswari Nagara Vaasigala Sangha, asked how can the slum dwellers live in an uninhabitable building. “The place lacks basic facilities like water and electricity, even the walls are broken, how can the Board expect them to live there? Children are enrolled in the schools and colleges nearby. It will become difficult for them to continue.” 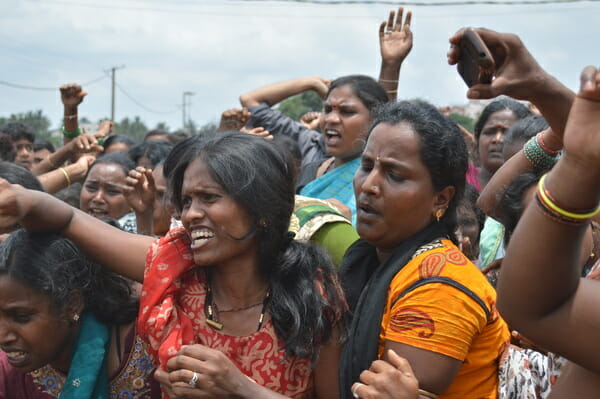 Eviction stayed by the High Court

In Writ petition no 18702/1988 filed by B Krishna Bhat disposed of in 2008, HC had ordered the eviction of Jai Bhuvaneshwari NAgar slums on the grounds that they have been occupying land within the Shantabai Devarao Shivaram Tuberculosis Research Centre and Rajiv Gandhi Institute Of Chest Disease Institute.

Following this, KSCB made alternative arrangements for a three-storey building at Kudlu, Anekal. In the same petition, slum dwellers asked the court not to relocate them to Kudlu, a place which is 20 km away from their workplace, and instead asked that the new houses be constructed at the very same place where they are staying. Court didn’t pay heed to the slum dwellers’ demand.

However, media reports said the quality of construction is poor, which might collapse any time. The Slum Board resorted to forcible eviction after slum residents refused to move into the new place allotted to them.

The area is a declared slum. The notice of eviction was issued by the KSCB a week ago, to the 515 houses. Following this, 57 residents knocked the doors of the High Court doors producing the proof for the low quality of the housing provided to them. A temporary stay was ordered on the eviction by High Court bench Justice Ashok B Hinchigeri on June 02 in WP no. 22843-891 of 2014 (GM Res). The matter that was to be heard on June 10th has been now advanced to June 5th.

Why eviction in spite of stay order?

Christopher J, an advocate representing the slum dwellers said that though HC ordered stay on the entire eviction, the government interpreted it as “Only 57 houses are not to be evicted.”

He added: “Every year the board carries out a survey. In 2013, the number of slums were 515, but there are about 300 additional families living here.” A press release from the  Jai Bhuvaneswari Nagara Vaasigala Sangha said that three days ago, when the community carried out a suo motu survey, they found 800 houses in the slum.

Police officers said that they were not informed about the stay order. 30 protesters including women, children and lawyers were forcefully detained. Later in the evening, Executive Engineer N P Balraj came to the spot to mark the 57 houses which will not be evicted. However the rest will be evicted by June 7th, as per the notices served.

The Kudlu rehabilitation houses built by KSCB has 1060 houses. Out of this, 540 are already occupied by slum dwellers living across the city. Christopher J said, “Where will rest of them go?”

Govt hospitals were cleaned up to handle COVID-19, but will they remain so?

Since mid-March, government hospitals in the city seem to have been cleaned up and prepared to deal with COVID-19. But what is the average government hospital like, otherwise? How can we ensure they are well-maintained all the time, and not just during emergencies?

One month after the shocking death of a borewell worker, no one in BBMP or BWSSB seems to be in position to give a clear picture of what went wrong.

Bangalore-Bangarpet Express may not be fast.. but you don’t have to worry about the crowd!