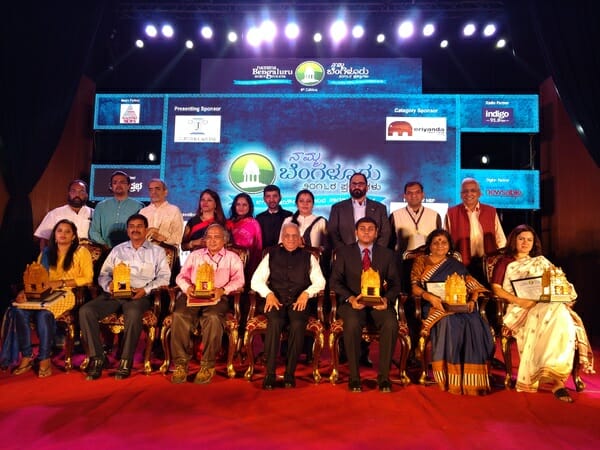 Namma Bengaluru Foundation hosted its flagship initiative – ‘Namma Bengaluru Awards’ (NBA) in Bengaluru today. NBA aims to recognizing, honouring and celebrating the efforts of Bengalureans for their unparalleled contributions towards the city, identified and honoured 6 ‘Real’ heroes of Bengaluru.
Presided by Hon’ble Justice Shivraj Patil as the Chief guest and Smt. Thara Anooradha, National Award recipient and a politician as the Brand Ambassador, the evening saw the winners of the Eighth edition awarded in the following categories:

Dr. T V Ramachandra was honoured with ‘Namma Bengalurean of the Year’ award.

Since its inception in 2009, the award has operated in a transparent framework that encourages citizens to nominate extraordinary contributions by fellow Bengalureans. Thousands of nominations were received out of which 36 nominees were shortlisted across five categories. The focus of this year’s awards was on individuals who with their exceptional work have made a difference in the city.

Talking about the awards, Sridhar Pabbisetty, CEO of Namma Bengaluru Foundation said, “Namma Bengaluru Foundation not only recognises such remarkable citizens but we also work along with jewels of the city and various communities to be champions of change to build a better Bengaluru. In 2016 we worked on several issues that plague our city including lake protection, protecting our public lands, sustainable transport and improved urban planning processes. The significant success have been possible due to our continued focus on our core principles of Advocacy, Partnership and Activism.”

The nomination process which began on November 2016 was open for a span of one month. The jury, which consisted of eminent and celebrated citizens of Bengaluru, interacted with every single finalist, then decided upon the final winner after a due diligence. The entire process was monitored and supervised by renowned audit firm – KPMG.

Justice Shivaraj Patil commemorated the winners and thanked Namma Bengaluru Foundation for its
efforts in recognizing the unsung heroes of Bengaluru.

Thara Anooradha, Brand Ambassador said, “We are really proud of the winners, these are the real
heroes whom we see on screen. Every year, Namma Bengaluru Awards introduces the citizens to six
unsung heroes whose efforts needs to be recognized and honoured.”

The details of the winners are as below:

Holding a doctorate in Ecology and Energy from Indian Institute of Science, Dr TV Ramachandra has contributed to the rejuvenation of several lakes in Bengaluru. He has contributed in setting up the Bioremediation model at Jakkur Lake and has also helped in the plantation of a mini forest with 45 Western Ghats species, which has led to improved ground water level from 150 feet to 10 feet. He has
published over 252 research papers in reputed peer reviewed international and national journals, 50 book chapters, 242 research papers in the international and national symposiums as well as 16 books. In addition, he has delivered several plenary lectures at national and international conferences. Publication titled “Milking diatoms for Energy” is seminal work in biofuel research evident from reports in Scientific American, BBC, national dailies, etc.

Working as a Deputy Conservator of Forests and Lakes with the BBMP, Jagannatha Rao has for decades now tireless worked towards protecting our environment. Known for evicting encroachments and fencing 48 lakes in the city, he has actively involved the local communities and has educated them on how to preserve and maintain our lakes. In the past one year, Kalkere lake (area-186 acres), Challakere lake, Kempambudhi, Mahadevapura have been rejuvenated and developmental works are in progress in lakes such as Kundalahalli, Kodige Singasandra, Mangammanapalya and Basapura Lakes.

Co-founded by Geetha Menon in 1988, Stree Jagruti Samiti is an organisation based in Bangalore that
champions the cause of domestic workers and fights for their labour rights and employment benefits. It also rescues and rehabilitates domestic workers who are minors. The women of the organization have over the years focused on problems by rallying with smaller local groups of household helpers across the city and the state. The group also conducts science and art camps, child rights awareness workshops and adolescent health advisory sessions for children of domestic workers.

A software engineer by profession, Harshil Mittal started an initiative Let’s Spread Love with an aim to
solve the daunting challenge of hunger through a simple idea of cooking a little extra food in every home.

Thanks to his initiative, underprivileged children and senior citizens across the city wait eagerly for the third Sunday of every month when they are treated to piping hot homemade food. Since its inception in October 2015, Harshil and his group have been able to feed over 1 lakh underprivileged people in Bengaluru.

Jasmeen Patheja is the founder of Blank Noise, a community / Public art project that seeks to confront street harassment, commonly known as eve teasing in India. It addresses women’s fear based relationship with their cities via direct street action and public interventions, which ask women to be “Action Heroes” by not being idle in public. It also works towards an attitudinal shift towards ‘eve-teasing’ and involves the public to take collective responsibility of the issue. Through street actions and dialogue, Blank Noise hopes to achieve its aims of achieving a safe and free environment for women on the streets, and enable society to become more egalitarian towards women in general.

A veteran journalist, who has worked with India Vision, New Indian Express and Times Now, founded thenewsminute.com in 2014 along with Chitra Subramaniam and Vignesh Vellore. The News Minute is a digital news platform reporting and writing on issues in India, with a specific focus on the 5 southern states. The content includes news, ground reportage, news analysis, opinions and aggregations. With their deep access in the southern states, TNM, headquartered in Bengaluru has emerged as a credible news portal in a short span of time.

Citizen Matters is the winner of Namma Bengaluru Awards in media category, for the year 2014.

This note was shared by Namma Bengaluru Foundation, and published here with minimal edits.

About Rahul 4 Articles
The author has not yet added any personal or biographical info to her or his author profile.

An underpass at Sarjapura Road-Harlur Road junction solves no problem and is likely to worsen traffic. It is also in the way of the Sarjapur Metro line.

Many a time, empty, unmaintained plots become spaces for dumping garbage. Here’s how a citizen ensured that one such plot didn’t go that way, and became the children’s playground it was supposed to be.

Bangalore Political Action Committee (B.PAC) today released a list of 28 endorsed candidates from 18 Assembly constituencies for upcoming assembly elections, 2018. “A country like ours has a diverse polity and you need multiple skillsets