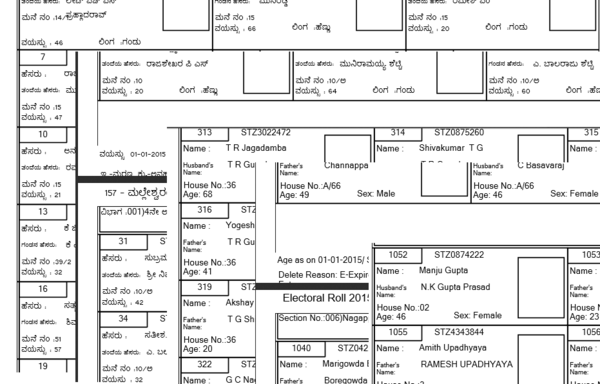 Despite several measures taken, as claimed by the Chief Electoral Officer – Karnataka, to avoid errors in the electoral rolls, it seems the attempts have not yielded in a foolproof result.

Like every year, there are glaring errors found in the final electoral roll published on CEO-KA website in the first week of this month, and the error pattern is almost repetition of the previous years. Complaints, suggestions and requests by various forums and active citizens for the improved electoral rolls, perhaps, seem to have fallen on deaf ears. Though BBMP election is only a few months away, it appears that the hue and cry over errors in electoral rolls will not see light of the day in a near future.

A glance at the electoral rolls of 28 constituencies in Bengaluru will only support the fact. P G Bhat, a retired naval officer and an activist, who, as always, analysed the voter rolls, has many interesting observations on the quality of the voter roll.

Voter id cards with no numbers

Let alone the blank EPICs, to one’s astonishment, Bengaluru is abode for 23 voters who are above the age of 120! That is not the end. The electoral roll has 1,44,695 names with ‘late’ as prefix to the names. Probably a mistakenly attached prefix which could be a clerical error. The number of such cases in the electoral roll in October 2014 was 1,41,144, and now increased by 3000.

Going by the date of birth details, there are numerous instances where the parent of the voter is older by just 13 years, mother is older by less than 19 years, which is most unlikely to happen in an era where child marriages in the city are illegal. If at all it is true, it points to just another flaw in our society where women are made to bear children before they are 20.

The total number of cases where the parent is older by less than 13 years is 14,085. In over 2,000 cases, the name of the voter and the relative (father or husband) is the same as the voter. While calculating the duplicate voter sets, it easily points at 15 per cent of the total electoral rolls.

The poor quality of PDF files of electoral rolls has not been improved even after repeated complaints. A glance at the electoral roll and you will find over 1,500 instances of unreadable records with jumbled data. In several pages, the records are overwritten making it difficult to read and identify the names of the voters and relatives. As many as 1,197 voter records are virtually deleted by modification. In 296 cases out of them, even the EPIC number is changed.

Despite the claim made by the electoral officers to minimise EPIC duplication, it has not been successful. As many as 2,713 EPICs are duplicate ones.

Booths with more voters than it can handle

The CEO-KA has also defied the clause mentioned in Election Registration Officer Handbook, published by ECI in 2012 which states “the commission has however, with voter’s convenience in mind, has desired that a part should not have more than 1,200 electors in urban area and 1,000 electors in rural area.” This directive is to ensure convenience to voters and thereby improve the voter turnout.

But in reality, an analysis of booths published by CEO-KA shows that 53 booths of Bengaluru have more than 1,400 voters and 2 booths have more than 2,000 voters.

Citizen Matters randomly made calls to a few BEOs to examine if the numbers exist. In several cases the numbers given in the list were either wrong or the number did not exist. In a few cases, the designation of the BLO was not filled and in some (for ex: Shanthinagar Assembly Constituency), the phone number was not displayed.

Voter roll analyst P G Bhat complains that despite bringing the issues to notice of the CEO-KA and other concerned authorities to rectify the error every year, the advices have not been taken positively. “When I informed about it prior the Loksabha election, I was told that there was no time to rectify errors as the election was going to commence shortly. But, now even after the polls, they have not rectified the errors,” he observes.

The process of summary revision of electoral rolls began in September 2014 as per the Election Commission of India’s directive. Accordingly, BLOs are supposed to verify and scrutinise the voter list by visiting houses, collecting voters data and produced it to the designated officers.

The designated officers hold electoral registration camps in the booths to include names, delete entries in the roll, correct entries pertaining to name, address etc and transfer the booths. The revised list is then submitted to the ERO or tahsildar who will have the right to approve the list. The list will be then submitted to a private agency which will upload the information to the software and prepare the draft electoral roll. This is the standard process.

Here are reasons why the errors crept in:

Anil Kumar Jha, Chief Electoral Officer of Karnataka, said: “It is natural that errors occur while compiling and updating massive data and we have been doing our best to rectify the errors.”

When asked whether the software coding was responsible for inappropriate deletion of names, he denied it. He said re-registration at times leads to duplication, but it is the onus of the applicant as well as the ERO to delete the name of a person if the name is registered in two booths.

What is noteworthy in the entire process is that the ECI has not made it mandatory for all the details to be appropriate in EPIC, for a citizen to vote. A person is allowed to vote if the name of the person is correctly printed in the voter ID / slip, and he has a proper id proof. No one will ask for the accuracy of address, spellings and so on.

The story of how I got my voter id in Bangalore

They advertise about how easy it is to get your voter card. In reality, it is not a cakewalk!

Hundreds of trees in Bengaluru are being felled for Metro rail, but compensatory saplings are often planted outside the city, or maybe never. Officials do not keep track of the saplings or ensure their survival either