In a symphony of horns and beeps, cars, buses and motorcycles bullet past the populated Springfields apartment complex, the enormous Wipro campus, and the multitude of schools that dot the famous Sarjapur Road. It turns from a mellow street at night into a hub of pandemonium we witness during the day. Narrow and long, it stretches on for kilometers, providing access to thousands of residential complexes and immense corporate offices. Smaller streets branch out of the main spine of Sarjapur Road like tributaries, spreading to Electronic City and Marathahalli. As it trails away from Bangalore city, it dissolves into the countryside, enveloped in a concoction of sandy terrain and small villages – it is the Nile River of Bangalore.

Rewind the time back to a few centuries, and the metropolis that is Sarjapur is nothing more than a collection of villages. It was a jahgir in the 18th century and later was the headquarters of the Sarjapur Taluk until 1873. B.L. Rice, the director of the Department of Archaeology of Mysore, mentions in the 1887 edition of the Gazetteer that the population of Sarjapur at the time was 3,017. It was a booming production and trade center for cloths.

He states, “Muslins of various patterns, turbans, and small cotton carpets are made.” Raw, high quality silks were produced in this area since the reign of Tipu Sultan, which were then transported to other centers that converted the raw silk into cloth. There was enough variety to the sericulture industry in Sarjapur that farmers were able to manufacture silks of different diameters that led to different textures in final woven cloth. Every Sunday, a fair was held, that showcased numerous linens and muslin – approximately 100 people attended.

In 1802, Major Lambton embarked on a monumental project to properly chart India using a system using blister steel chains, wooden coffers, and thermometers (to check for expansion/contraction of metal). Before this Great Trigonometric Survey had officially commenced, a sort of practice run was conducted in the Agara district, bordering what is today Sarjapur. For nearly seven and a half kilometers, they manually shifted the position of the contraption over 500 times, using a system of triangulation to accurately record the figures by determining the curvature of the earth.

According to Vijay Thiruvady, who has studied the Great Trigonometric Survey and has read numerous accounts of it, the accuracy of the device and the method was so precise that the difference between what the British recorded and what the actual value would have only been 0.1 inches off. Even by today’s standards, the GTS is considered to be one of the most impressive and accurate surveys ever conducted, and it all started just a few meters from Sarjapur road.

In the larger scheme of things, Sarjapur did not have much role to play in the forming of early Bangalore. A cloth production center and the test area for a revolutionary mapping procedure certainly added to its character, but ultimately little attention was paid to Sarjapur. What we understand about Sarjapur is only from what we can piece together with the fragments of history we have – it is more of a scientist making some inferences rather than a detective making deductions.

One such example that strikes intrigue is a mysterious substation in Sarjapur, on the way to Bagur. Around three kilometers off Sarjapur Road lied a large electrical station, with architecture reminiscent of early 1900s Bangalore rather than the modern buildings that surround it. Why would there be a substation in such a remote locale? Mr. Thiruvady, after thorough inspection, believes that it could not only be one of the oldest substations in Bangalore, but one of the oldest in India. 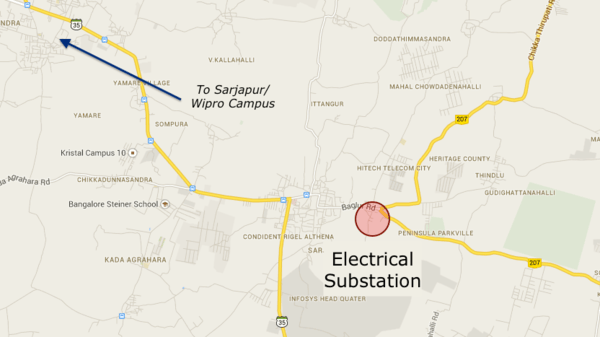 In 1902, Asia’s first major hydroelectric plant, commissioned by K Seshadri Iyer, was built in Mandya District to harness the power of the Shivanasamudra Falls. From there, an electrical line was drawn out to the Kolar Gold Fields, where large mechanical diggers utilized the electricity to mine shafts underground. Curiously, the line passes through this area of Sarjapur. Some sort of converter would have been needed to step-down the current to 220 volts. Mr. Thiruvady comes to the conclusion that it is very likely that the substation was built around 1902, along the Shivanasamudra-Kolar line, in order to convert the power. 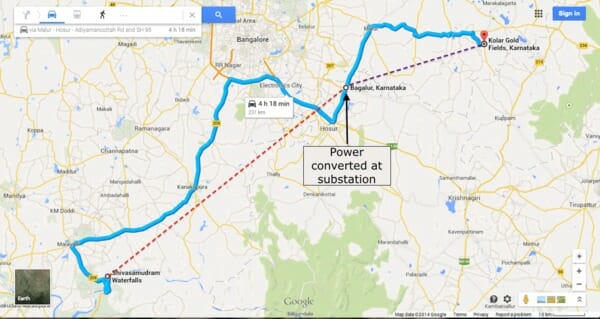 No window left to peek into history

There is no documented evidence to support this, but the notion holds strong. The architecture, size, and location of the substation pointed to the fact that it was definitely older than most of the other ones in Bangalore, and that it is directly in the path of Kolar from Mandya is too much of a coincidence. Nevertheless, only physical evidence will prove this theory.

However, when the author visited the substation, the substation was found to be completely modernised, leaving no traces of history are available to verify.

BESCOM sources confirmed that there was a 78KV swtching station in this place, that ran from Shivasamudra to Kolar Gold Fields. The new substation was built in 2007 and was commissioned in 2010-11. This suggests that the original station constructed in the early 20th century has been replaced! 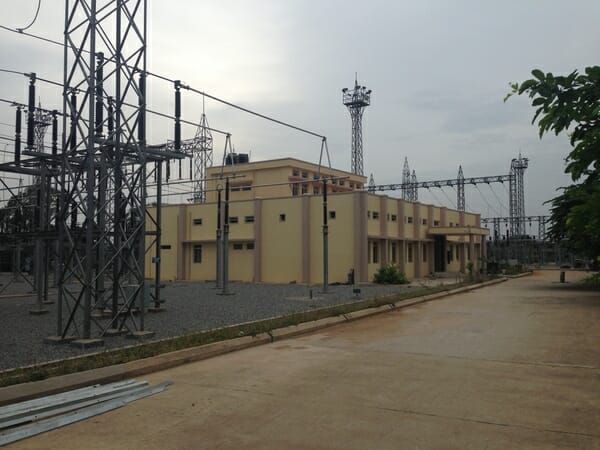 The modernised substation doesn’t hold any clue to its past. Pic: Dushyant Naresh

Even though the mystery of the substation might never be solved, the fact that there is a mystery surrounding it generates excitement. Questioning some of the things we take for granted can often lead to the most astounding conclusions. Legend says that Newton was lounging underneath an apple tree when he came up with the theory of gravity – maybe we should just sit down and question some of the things that are hidden in plain sight.

When ‘Art’ comes in the way of friendships

Evam’s “Art” perfectly blends the playing out of egos between friends and the discussion on ‘what is art’ with a touch of comedy.

Malliah, a farmer in the Kodigehalli taluk is happy to lead a life that revolves around his land, his animals and his village fairs, even as his land faces threat as the city expands.

Everyone complains about lost childhood in summer camps and extra-curricular activities. But what about the mothers who ferry their children from one class to another?