The Prime Minister’s recent call for a clean India notwithstanding, the authorities are content dumping truckloads of rubble right in the middle of the city as a “solution” of sorts. In fact, this has been going on for almost at least two years and it is startling that this has gone on for such a long time.

At Hosur road, coming from Bommanahalli, as you walk below the Silk Board flyover, you can notice mountains of rubble under the flyover – this, a solution to discourage the vehicles to go on the other side of Hosur road. There’s a No-Entry board put up by the traffic police, along the debris. The idea seems to be that no traffic should flow under this side of the Silk board flyover.

As it happens with most No-Entry boards in the city, people pay no heed. For the convenience it offers, more law abiding people drag their two-wheelers to cross over to the other side of the road. The authorities thus have come up with the novel plan of blocking that route by creating mountains of rubble. 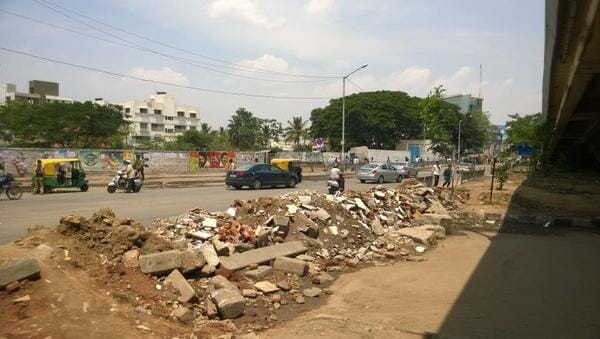 View from the other side – under the flyover. Pic: Aditya Kumar

But two-wheeler riders, mostly coming from HSR Layout side’s service lane who want to go towards BTM or Madivala, find it utterly inconvenient to go by the rules so they eventually drive through these mountains of rubble. 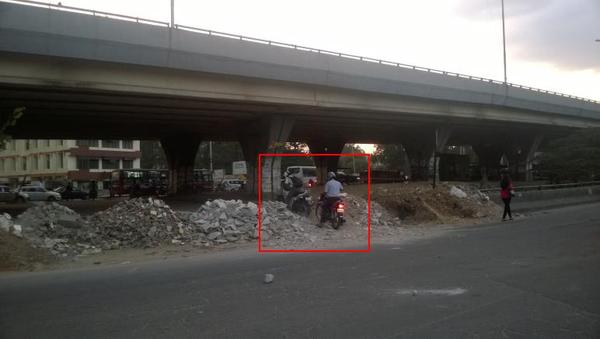 Slowly, the constant treads wear down the mountains until eventually it becomes a path. 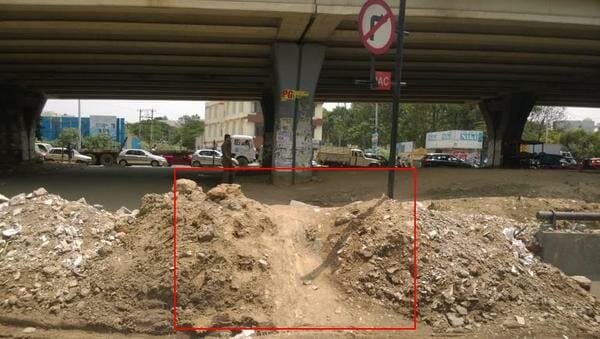 When the rubble flattens out, the authorities order more rubble to be dumped here. In fact, a tea stall vendor close to the place mentioned that the Traffic police cops who are on duty at Silk Board signal generally catch one of the many heavy vehicles that is transporting debris and order to dump it here.

It is unknown why the traffic police want the road below this side of the flyover to be blocked. A similar road on the Madivala side of the Silk Board flyover is open for use.

Pedestrians and bike riders use the above flattened out path regularly. Just below this there is an open drain, which poses a risk. With the bikes roving over the rubble, large chunks of stone and waste material is strewn on the main road – this makes it very risky for the traffic, specifically the two wheelers, coming from Outer Ring road side towards Hosur road.

Of course, the main problem remains this — how could the authorities think that dumping mountains of rubble, right in the middle of a road, is actually a solution to a problem?

Seeking answers, on two separate days, I reached out to the traffic policemen on the Silk Board signal. The first day, two policemen were on duty. When told about the debris used as a blockade, they did not see it as problem at all. Later they said that what they want here is a temporary “gate”. Something they can open up when the traffic is at maximum. For the rest of the time, they want it to be closed. When asked why they couldn’t use traffic barriers/barricades for the purpose,  they replied that people eventually put them aside and use the road anyway. When it was pointed out to them that it was happening even now, they did not have an answer. Bored, one of them, asked me to talk to the local corporator, adding that this was BBMP’s business.

Another day, a policeman on duty told me that this was BBMP’s problem and had nothing else to say about it.

What was clear from the above interactions was that the traffic police does not consider these mini-mountains of debris as a problem at all but at the same time pleads ignorance when asked about it. According to them, this has always been BBMP’s doing.

Loss by traffic jams in Bangalore : who is accountable?
How to improve traffic on Mysore Road
Agara SEZ to multiply traffic on Sarjapur Road

About Aditya Kumar 1 Article
The author has not yet added any personal or biographical info to her or his author profile.

Passengers on a Bengaluru-Chennai bus unite in their demand and get a better bus. A citizen report by Prasanna Venkatesan.

Lessons in waste management from the Bengaluru Marathon 2014

The recently concluded Bengaluru Marathon 2014 was indeed an example of responsible racing, with waste management being given priority.