It was camp-fire time at Naamadachilume, near Tumkur, Karnataka, school year 1972-73.

All manner of sharing, singing, joking, and so on was going on. The Scout Master said, “I know students call me Dappa Ravay (V)unday. I think it is because I am a very sweet person.”

In those few seconds, we realized that famous “fortune” line that would appear, decades later, on my Unix terminal: “Remember that secret you had? It isn’t!” 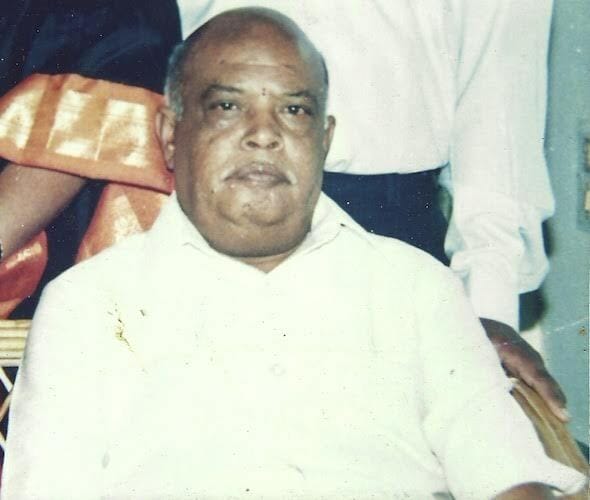 Generations of students (about 5 or 6 only, at the time) had called him that. Full name: Sri D R Vijayendra Rao. School convention, initials only, maximum of three: DRV. Hence, the nickname that some student who thought he was the cat’s whiskers in giving a new expansion to those initials. There were other such feline whiskers over the years. Each less imaginative than the rest.

What we thought was a secret used to cause both fun and tension… the fear of the embarrassment of being found out. All gone in ten seconds.

In 2012, I was chatting with a neighbor. When I told him about some of my teachers at National High School, he told me that DRV’s youngest son, Sri Prahlad has a business nearby. I had seen the shop several times and had been meaning to go check it out anyway. Eventually, I got round to it.

Prahlad was delighted to meet an old student of his fathers. I told Prahlad that I want to put the story of some of my teachers in writing because there is no other written history out there about these really amazing people. At least not that I know of. 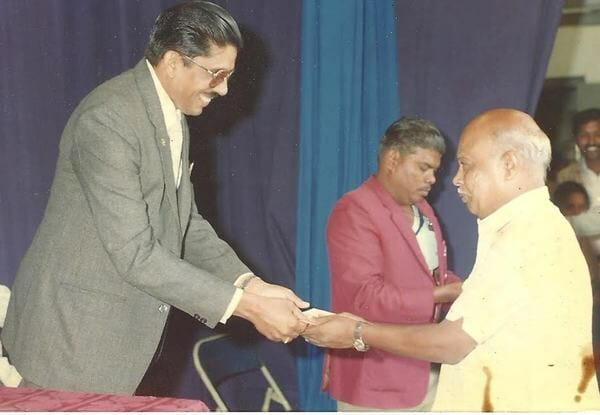 In earlier years, I have written about the impact that Sri B Narasanna (my social studies teacher in school), Vidvan S Alasingara Bhatrachar (my samskrtam teacher), and Sri G K Nagarajan (my English teacher) had had (and continue to have) on my life. Here was life, in its mysterious way, bringing back to another favorite teacher: DRV (July 7th 1937 – August 19th 1997).

In all the years I had interacted with DRV, since I entered high school in 1974 till about 1980 or so, I had never seen him address anyone, even us little twerps, in the singular. It was always, banni, hogi, etc. in the plural.

As with all teachers, we made fun of him. A lot. That rascal, P, particularly who was the death of me because I couldn’t breathe most of the time when he was going… often in DRV’s presence.

But I know we all liked and respected DRV. It was only accidentally, in a conversation under a tree in Doddaballapur at the camp-site, that he let slip that a lot of the costs of the Scout Troop were coming out of his pocket. We were shocked. I vividly remember M, one of my classmates along with P, saying, “Sir, that is real good of you.”

This at an institution that was, at the time and for a long time afterward, run by a “visionary educationist” who was allegedly a great promoter of science education. Total hooey!

Our high school laboratories were basically junk rooms with old broken rubbish piled all over. With a little vision, those laboratories could have been functional and students could have gotten some real, hands-on science education. I used to hear how our teachers often spent money out of their own meagre salaries (and usually as sole earning members of their families) to even demonstrate some experiments in the classroom for us.

We got a decent science education thanks to our teachers and in spite of the vision of our eminent educationist.

Why is this relevant in the current context?

I interviewed Sri Prahlad and found out what kind of life DRV had at the time. This is a broad outline of the story.

Born in Shivamogga, DRV was aged three when his father passed away, victim of a plague that did the rounds in the late 1930s and early 1940s. Three brothers and the widowed mother, in severe poverty moved to a village near Tumkur. The kids survived having ‘vaaraanna.’

Vaaraanna, for those who don’t know, was a social structure that helped poor children have one good meal a day. Families would commit to and, as best as they could, deliver on this commitment to feed a child one day a week. So, if I were subsisting on this system, I would eat a meal at a different house every day (or every few days) of the week. This system has yielded many great (but not necessarily all famous) people who understood the pain of poverty and the importance of sharing.

For several years, the poverty was so severe that the brothers had lived homeless in Bangalore; sleeping on sidewalks. In this poverty, DRV and a cousin (also in the same situation), would share one pyjama-shirt set between them, in turn, to attend college.

DRV was more academically inclined than the other brothers and obtained a BSc in science from what later became known as GAS College (Gov. Arts and Science College), and a B.Ed. from Mysore University. For a couple of years in the middle of all this, he worked as an accounts clerk in Minerva Mills, that hoary old company in Bangalore.

The poverty had eased a little. The house in Malleshwaram, Prahlad recalls, consisted of a 10’x10’ living room and a second room, also 10’x10’, that served both as kitchen (and a part of it) as the bathing space. Prahlad recalled to me that until he reached PUC (Pre-University Course; equivalent of grades 11 and 12), they did not have electricity at home. Lighting was by kerosene lamp.

The meagre salary from NHS had to support himself, wife, and two sons. However, his experience of poverty had, so far from creating rancour in him, made him sensitive to the needs of others.

Prahlad told me that DRV supported (with room and board and everything) two nephews – consecutively, at ten years for each – for twenty years! Not just that! When new clothes were bought for a festival, apart from everyone in the household, Prahlad’s playmate, Suri, son of a very poor family, would also get new clothes. Neither Suri, nor the cousins, were any different to DRV from his own sons.

This was the man who spent out of his pocket to keep the scout troop going, augmenting the pittance that the troop got when the school deigned to. This was the expenditure that made me (and several generations of NHS scouts) learn a thing or two while also enjoying the scouting experience.

In December 1973, our teachers were rehearsing a hilarious play to put on for our enjoyment. Classes were closed because we were all preparing for the annual exhibitions. We were taking a break from making things for the scout exhibition in room M10, 1st floor. We sat on the balcony and watched the rehearsal, with DRV and Prahlad who was visiting for the day.  DRV was not acting in the play.

Prahlad, then a little kid, pointed to another samskrtam teacher, Vidvan K T Sundarasampathkumarachar (nicknamed ‘padosan’ after the movie of the same name in which there was a dance teacher who looked like him, played there by Mehmood). KTS was on stage, rehearsing. Prahlad pointed to KTS and said loudly, “Appaa… juttupillay!” (not translatable; sorry)

We were very amused and fled into the room tittering away. DRV put Prahlad in his place by telling him firmly to cheese it. But the kid did it one more time and got a light whack and glare. No more mischief from the boy after that.

But we thought he was a total delight. 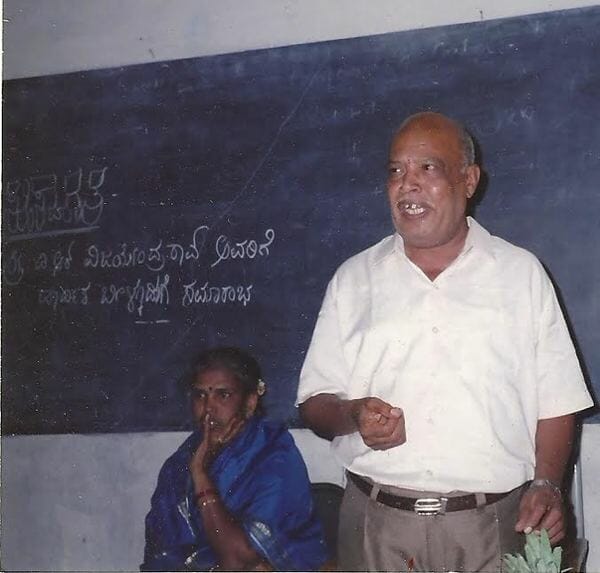 DRV at his send-off party upon retirement in 1995. To his right, is his wife, Smt Ramamani. Pic: DV Prahlad

That anonymous young smartass who thought he was being oh-so-clever with his DRV = Dappa Ravay (V)unday was, however inadvertently, on the ball.

DRV’s own explanation was spot on, though he was only joking about it.

Thanks to Sri D V Prahlad for sharing so much about his father, and the photographs.

The man behind SAHAI

Rajagopal’s personal experience led him to create a helpline for those with suicidal tendencies. This Koramangala resident wants to create more such helplines locally.

From Mathura rape case to Nirbhaya and beyond: What has changed between now and then?

Did rapes take place 30 years ago? Yes, but they barely came to light. The case of a dalit girl’s rape in police station led to the formation of rape law in India. What has changed between now and then?