Mandran and NCBS (National Centre for Biological Sciences) have put together Jigyasa event for 2018, themed on Traditional Knowledge meets Modern Science. The event starts at 9.30 am on December 15, 2018 at the Dasheri Hall in the NCBS campus in Kodigehalli, Bangalore.

This time the Jigyasa project features three languages, Kannada, Tamil and Hindi with eminent scientists participating to share their knowledge in their mother tongues. This event has been put together to benefit people whose primary language of communication is not English. 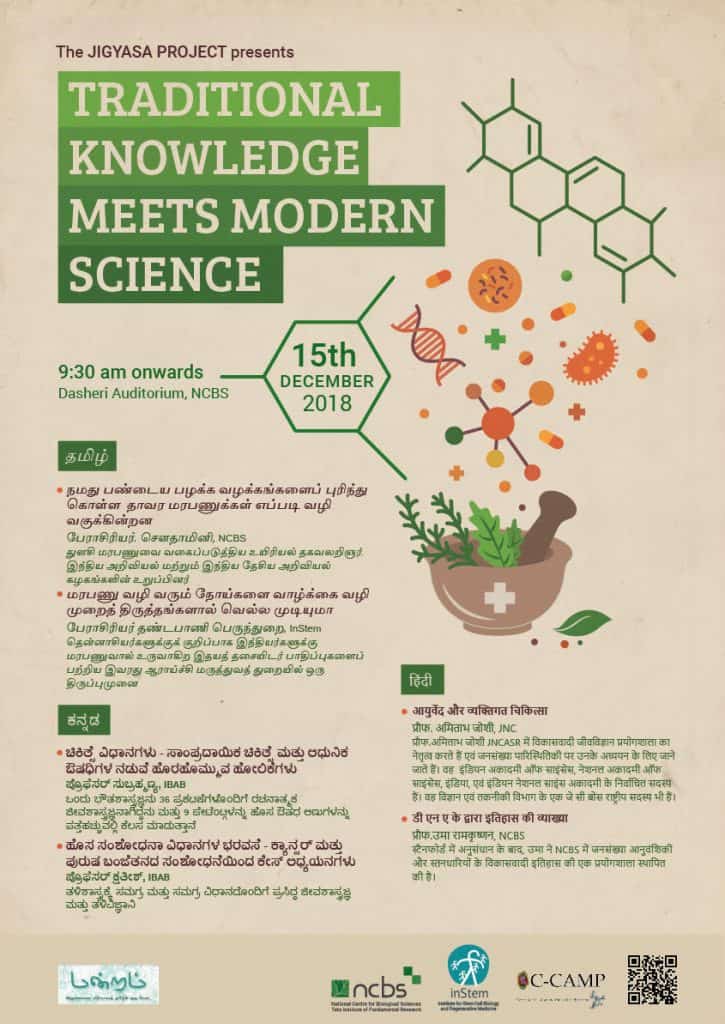 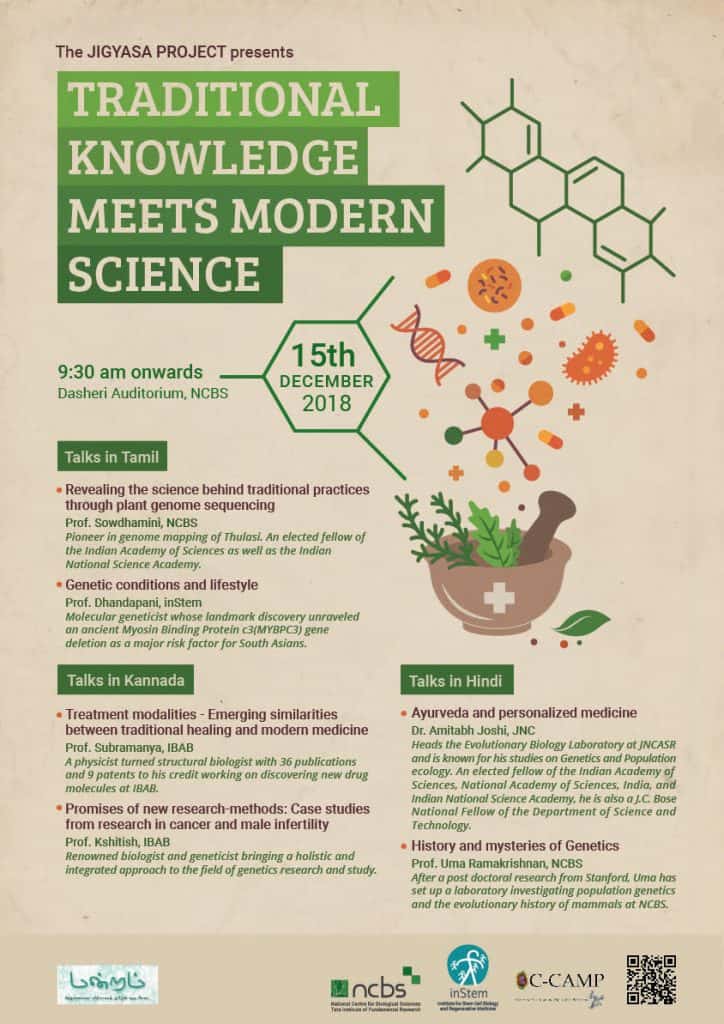 Prof Sowdhamini from NCBS is a pioneer in genome mapping of Thulasi. She is an elected fellow of the Indian Academy of Sciences as well as the Indian National Science Academy. She will speak about how plant genomes explain the reasoning behind some of our traditional practices.

Prof. Dhandapani, INSTEM, Molecular geneticist whose landmark discovery unraveled an ancient Myosin Binding Protein c3 (MYBPC3) gene deletion as a major risk factor for South Asians. He will share his knowledge on how some genetic orders are becoming major risk factors due to our lifestyle changes and how we can overcome them.

Prof Subramanya, IBAB is a physicist-turned-structural biologist with 36 publications and 9 patents to his credit working on discovering the new drug molecules at IBAB. Subramanya will talk on interesting similarities between emerging treatment modalities in modern medicine and how they have always been the central principles for ancient healing mechanisms.

Prof Ksitish, IBAB is a renowned biologist and geneticist bringing back a holistic and integrated approach to the field of genetics research and study. He will share how his unique approach has impacted his studies and work.

Prof. Amitabh Joshi, JNC, heads the Evolutionary Biology Laboratory at JNCASR and is known for his studies on Genetics and Population ecology. An elected fellow of the Indian Academy of Sciences, National Academy of Sciences, India, and Indian National Science Academy, he is also a J C Bose National Fellow of the Department of Science and Technology. He will focus on Ayurveda and personalised medicine.

Prof. Uma Ramakrishnan, NCBS, after a post doctoral research from Stanford, has set up a laboratory investigating population genetics and the evolutionary history of mammals at NCBS. Prof. Uma will speak on how genetics is shedding light on evolutionary patters of humans.

The event is free and is open to all. Lunch will be served at the venue. RSVP here.

Mandram, the organiser of this event, is a global platform for like-minded people with interests in Tamil language and literature, from different backgrounds, to share their perspectives, journey and success stories. The first-ever Mandram was organised in Chennai which had speakers from varied backgrounds like science, art and culture sharing their perspectives. Mandram was started in January 2018 by Maragathavalli Inbamuthiah (Director, AnitaB.org India) and Venkatarama Ramachandran (Digital Story Teller and Product Manager).

Note: This press note has been shared by the organisers and published here with minimal edits.

The monk who makes cheese

Meet Father K L Michael, administrator of a KR Puram-based monastery. This priest from Kerala, now supplies cheese from Bangalore to various parts of the country.

While Cauvery water is usually used as drinking water in homes that have water purifiers, about 2/3 of the city has no access to such piped water. They depend on packaged drinking water cans for drinking water needs, but these cans have been scarcely available since the lockdown.

Has your apartment got a ‘verification notice’ from Bengaluru City Police?

Police has asked apartment associations in the city to submit details of all current and former residents. But associations say this violates residents’ right to privacy