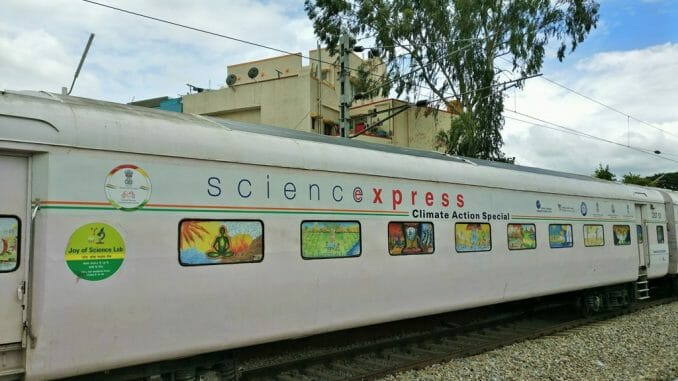 Saturday (10 June 2017) morning saw me at the Kengeri railway station. I was there to see the Science Express – Climate Action Special. This was a special train exhibition that had reached Kengeri the previous day after a 3-day halt at Whitefield.

The first thing that met my eyes was a queue that appeared to be almost never ending, especially as it was a serpentine queue spanning at least 2 platforms and an overhead bridge. This was something I had not expected. In my naivety (or should I say arrogance as I had believed that not many would be interested in such an exhibition), I had presumed that viewing the exhibition on wheels would be a cake walk and that I would, at best, need about an hour max to see everything. 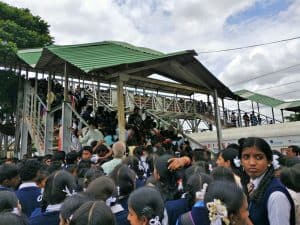 What I had not factored in was the queue, the rush and the lack of effective crowd control.

The long queue and therefore the associated long wait almost caused me to turn back. School students, hundreds of them and countless families – parents, young children and senior citizens all, made up a majority of the visitors to the exhibition. It was the recurring thought that I had travelled (and you will understand why I use this word if you have been in Bangalore for even a week) nearly 20 kms one-way that made me reconsider the decision to persist.

I joined the queue. But then, when I saw a possible back door (read ‘faster’) entry if I crossed the tracks and went to the other platform while bypassing the bridge, I joined those who were doing just that. Except that, when we reached the platform that hosted the train, we were met by 2 effective barriers – a strong rope from the train to the opposite end of the platform which prevented us from entering it, AND a handful of volunteers and policemen who just would not allow us to enter the platform from that end.

After numerous futile attempts by the 50-70 odd people gathered there, I turned round and went back to join the queue. Or rather what passed for the queue but was actually a crowd of people all wanting to get ahead of the others. I shall not even describe the extent of pushing and pulling that happened while waiting to climb the stairs leading to the bridge. Suffice to say, I was really tempted to escape from this maddening crowd. Just the thought that I had come so far was what kept me going.

After a near-stampede situation and having endured being packed as sardines in a can for nearly 45 minutes, I finally reached the platform where the train was stations. This was followed by a wait in a single-file queue which thankfully was fast moving. 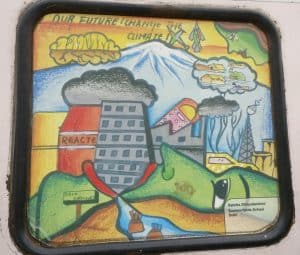 What made this wait a little tolerable was the display of paintings by school children from different parts of the country.

Needless to say, the theme was the earth and climate.Each window on the train had a different painting – these were no art works. They were however children’s expressions of the theme and made for an interesting viewing.

Also on display on a wall opposite the train was a ‘My Pledge’ chart which encouraged people to take a pledge to conserve forests and wildlife. Not many had signed that though. 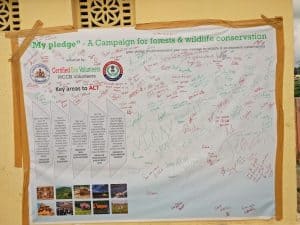 The long wait was forgotten the moment I stepped into the A/C train.

The very first exhibit that greeted us was a large globe (around 3/4 meter in diameter, or so it appeared) with a big thermometer in its mouth and the slogan ‘Earth has fever’. This was followed by a reassurance that ‘It is not too late’. Given that this exhibition was a climate action special (http://www.sciencexpress.in/index.html), this was an effective way of getting people’s attention.

What followed was a series of displays – mostly charts, photographs and write-ups, with an average of a model per coach. Details of what the different coaches had on display can be found here (http://www.sciencexpress.in/about-secas.html).

Green house effect, tipping point, Global impact, possible impact on India, water worries, forest stress, livelihood in danger, etc. were some of the many points touched upon. While the negative impacts of these and other activities by man were stressed upon, also included were various workable solutions for the problems mentioned. That ‘we are also a part of the solution’ was wonderfully brought out each time.

Some of the solutions were stated in such a humorous way that it was easy to remember. For example, a poster (with suitable illustrations) read:
How should I reduce weight? East less. Exercise more.
How should I reduce Carbon Dioxide? Emit less (vehicle and other pollution), absorb more (trees)
Alpikaran or Mitigation (restoring nature’s balance) was also talked about. An interesting ‘Mitigation wheel’ too was on display. What was clear that there is an urgent and sustained need for joint action as ‘we are all in this together’. Various sustainable development goals were also mentioned.

For the love of nature:

Other posters had the following pointers:

The last coach (or was it one prior to that?) had a wonderful made to scale model of the Vittala temple of Hampi titled ‘Virtually Vittala’.

Somewhere along the way, I got to chat with Pooja Dukhi, one of the science commentators who has been travelling with this train since it started its journey from Delhi on 17th Feb this year. She is a part of the team of 50 odd people who include around 35 commentators and other staff. 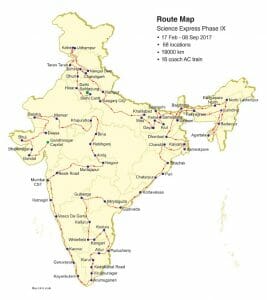 When asked what made her take up this assignment (which would last till 8th Sep 2017 and involves stopping at multiple cities along the way) Pooja responded thus: “It is talking to the kids that keeps me going. I get to interact with them and tell them about lot more things than what is written in the posters. Very often, we (the work we are doing) inspire children to take up a career in science – they look up to us as role models.’

And that was indeed the case. The commentators could be seen explaining some of the ‘working’ models or exhibits to the people present there while also ‘encouraging’ the crowd, especially the school children to not lag behind. To their credit, I also saw many school children taking hurried notes about areas that were of interest to them.

While school children were in the hundreds (maybe thousands too), I also saw many families and friends on the train. While a mother encouraged her pre-teen son to read some of the posters, I also saw a group of three young mothers (each with at least one child aged between 3 – 7) looking at the exhibits on display and talking about them, trying to work models where possible and explaining things to their tiny tots in a simple manner. It was indeed a heart-warming sight.

And before I know it, I had reached the exit. I had entered the station at around noon and it was nearing 2.30 pm when I exited. But I have come away with some nice memories of the train. The quality of exhibits and the bite sized parcels of information contained in each of the exhibits more than made up for the wait. I would so love to see more such exhibitions in our city and country.

In pictures: Where the Vrushabhavathy meets the Arkavathy

The Vrushabhavathy river rises from the Bull Temple in Basavangudi and meets the Arkavathy, which rises from the Nandi Hills range, at Kudlu. Vishwanath Srikantaiah traces the journey of the two rivers and their relevance to Bengaluru.