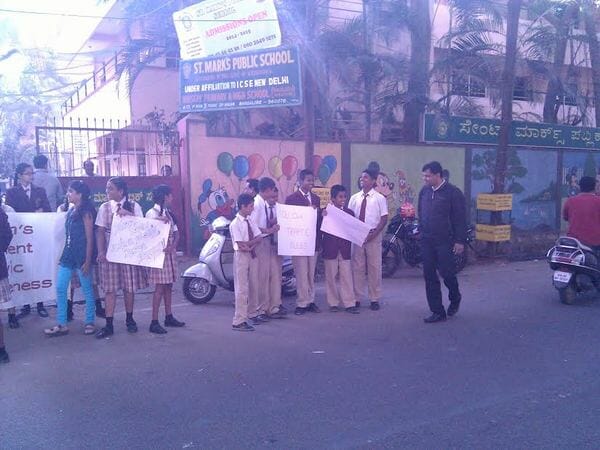 Children’s Movement for Civic Awareness (CMCA) children believe that ‘Change begins with each one of us’!  The Game Changers Civic Club of St. Marks Public School is one among the many member school clubs of the CMCA who stand by this belief.  Students of this club are a bunch of enthusiastic teenagers, who yearn to bring about a positive change in themselves, and inspire and transform citizens of their community and the city.

Towards this endeavour to make a difference, the children of the club noticed that the elders more often than not, did not follow road safety norms while dropping off children to school. Keeping this in mind, the club members embarked on a Road Safety Campaign outside their school, to educate the elders about the importance of following rules on the road.

Club members assembled in front of their school gate in JP Nagar, holding placards with messages and shouting slogans, drawing the attention of passersby. To their amazement, the kids noticed many citizens did not follow road safety norms. Some were riding without helmets, others were talking on their mobile phones while driving, some drivers were not wearing seat belts and there were even some parents who were allowing their children ride their bikes, while they sat as pillion riders.

The Civic Club members of St. Mark’s Public school took a step towards drawing attention to the need for road safety. This campaign not only pointed out the careless attitude of road users, but also was an attempt at cautioning their elders on the dangers of not following the laws and rules of the road.

Children’s Movement for Civic Awareness (CMCA) is a 14 year old volunteer-driven non-profit organization committed to a unique mission – instilling values of democracy and active citizenship in children and youth!CMCA runs Civic Clubs in 300 private and government schools across 8 cities and 16 villages (Karnataka). In Bangalore CMCA is present in 100 schools. CMCA children learn to stand up for their Rights and to fulfill their responsibilities and inspire others to change!

About Ravikala P Baliga 3 Articles
The author has not yet added any personal or biographical info to her or his author profile.

A walk for Bengaluru’s special children

A walkathon for special children raises awareness on Cerebral Palsy. A slide show of the event.

There is no respite from traffic pile ups on Bengaluru’s Outer Ring Road. Sometimes it’s rain, sometimes it’s bus breakdown. Does the government have the will to to fix it?