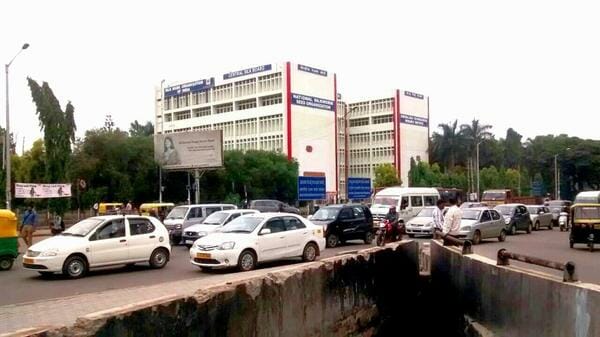 The clock chimed seven on a balmy Wednesday evening, as I peered out of the dusty window of my motionless office bus. A cacophony of voices, the humdrum of engines, snatches of conversation and a curse word or two greeted my eardrums. The scene in front of my eyes appeared as dull and despondent as my day had turned out.

A middle-aged lady driving back home from office killed her car’s engine, and got busy yelling instructions to the domestic help about that evening’s repast over her phone. A bored taxi driver stared blankly into the void waiting for the lights to turn green. A few bored employees in a cab sat with their eyes closed, tuning out the voices around them, desperately trying to grab some shuteye, while others simply continued typing away at their fancy laptops, hurrying to finish their jobs. A motorist or two looked forlorn at the sea of traffic ahead of them, and swerved their heads around looking for a small avenue to escape. Many a man stifled a yawn.

And then it happened! That single moment in time when the lights turned green, releasing the all-encompassing inertia from its shackles and the universe spurred into action. Like a ripple in a pond, like the awakening of the Kraken, sheer chaos unfolded. The soft symphony of the purring engines morphed into a reverberating crescendo of a Metallica song, punctuated by the harmony of the blaring horns. People sprung into action, seemingly jolted by an unseen force. The countless yawns gave way to expressions of horror, and forlorn gestures became rude voices. The dreary work day had transformed into a reluctant adventure! Some looked to attack, yet others contemplated strategy; many just looked resigned at the arduous prospect of manoeuvring their vehicles ahead.

The middle-aged lady seemed to focus on the task at hand, the repast long forgotten. The napping IT people appeared awake, despite being trapped in their buses. Taxi drivers looked frantically ahead for the next available short-cut, while motorists zoomed ahead on the neighbouring footpaths with reverent optimism for the road ahead to be motorable!

Just as the wave of chaos diminished, the serendipitous meeting of the clap of thunder with the dusky demure clouds, spawned a new wave that resonated with the prevalent chaos. As the first few drops of rain descended from the heavens, there unfolded a disaster of mythic proportions. A thousand curses were hurled at the heavens, along with a million prayers to aid a safe traversal on the insurmountable, pothole-infested, perennially under-construction roads of Bangalore. The lady behind the wheel and the taxi driver scurried past cautiously on the flooded road, as motorists struggled to navigate the slippery terrain. Those in buses warred within themselves,unable to decide whether to celebrate their safety or mourn the extra hour it would take for them to get home. As my bus forged ahead on the murky road ahead, a glimpse of the glowing face of a young girl dancing in the rain shone a light on the black abyss that had been my day.

About Pallavi Ravishankar 1 Article
The author has not yet added any personal or biographical info to her or his author profile.