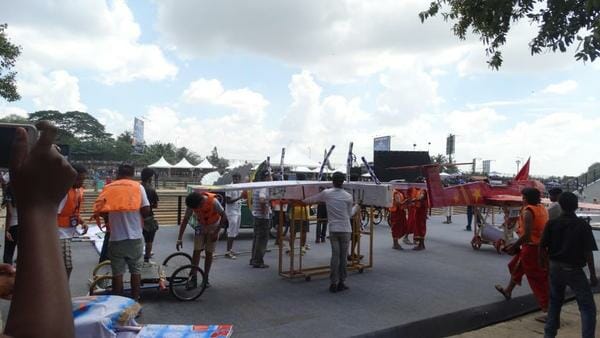 There are several issues – short term, medium term and long term, that I see with the RedBull FlugTag event held at Sankey Tank premises in Malleshwaram, Bangalore.

From the photographs I have seen of the aftermath, the areas around Sankey Tank appear littered with rubbish, with trash all around the lake and in the lake as well, including non-biodegradables like thermocol. The impact on the fish, birds and other lake wildlife that ingest this thermocol can only be imagined. During events like this, the noise and bright lights also add to the disturbance to urban wildlife. Lakes are not pure spaces for urban recreation: many different urban wildlife species inhabit these environments.

This kind of an event can set a precedent for BBMP and other government agencies to lease out other urban nature commons: our parks, our lakes, our wetlands, even areas like the Turahalli forest, for commercial ventures. This is a clear violation of the directions provided by the Karnataka High Court Committee headed by Justice N K Patil, whose directions were provided for good reason. Previous efforts by government agencies such as the LDA to privatise lakes were shot down by the court after PILs were filed by ESG. This seems to be another entry for privatisation of our commons, via the back door.

This leads to the third, long term impact of such events, which I think is the most significant. There has been much discussion in the media, public meetings and in online groups about how to plan for the sustainability of our commons. Unfortunately, although ‘sustainability’ in this context originally begins with ecological sustainability, the issue frequently gets transmogrified and starts to refer to economic sustainability. People and planners start to suggest approaches by which lakes can provide income generation through corporate funding.

Yet, it all comes back to the question of why do we think we need to conserve these lakes. Conservation for what, by whom? If a lake is made financially viable by generating income through motorised boating, opening theme parks, creating food courts, and renting out space for commercial events: is this still a lake? If so, organisations who open commercial zoos should be providing a more financial path to conserve wildlife – much more economically sustainable than protecting forests. Should we then cut down all our forests and transform them into paid-entry zoos? The farcical nature of this argument becomes immediately obvious when we put it in such stark comparison, yet it seems that many see nothing wrong in suggesting solutions such as these to manage our lakes.

Such thinking results in a transformation of the social conception of the lake, from an ecological commons that is open to all, to a recreational space, open only for those who can pay. The lake as an ecological commons shelters birds, fishes and reptiles, provides livelihoods for traditional communities such as fishers and fodder collectors, constitutes a sacred zone for local communities, a meeting space for people, and creates a location of serenity and inspiration for the nature-starved in the city.

Why convert this into a noisy, conventional urban recreational space with loudspeakers, event managers, bright lights, television crew, and an associated Facebook page? Quite obviously, our cities are not starved of commercial recreational spaces. Yet urban commons are probably one of the most endangered land use categories across the country, and provide a resource for the most underprivileged and dispossessed of urban dwellers, who get entirely left out of these conversations around use and access.

Subordinating the issue of sustainable management of our urban commons to issues focused on economic sustenance would be a tragedy. Unfortunately, this is the long term discourse that we can see events such as the RedBull FlugTag moving us towards.

My five-point agenda for a better Bengaluru

A willing and strong-willed Mayor who loves the city can achieve a lot in the year-long tenure. Here are five such things!

A mathematical decoding of urban traffic

Footpaths should be fixed and made widely available, continuous, and uninterrupted. Maybe then those who create traffic jams might try to walk and reduce the jams?