On August 14th, contestants from Sanjay Nagar ward came together for a candidate meet organised by Namma Bengaluru Foundation. Participants included candidates from three major political parties, as well as an independent candidate. The issues discussed included property taxes, eliminating free parking, and ways to address the stray dog problem in the neighbourhood.

What will you do for Bangalore?

JDS: I want to serve the community.

(To BJP) BBMP was in power for 5 years. What has BJP done in 5 years and what will you do?

BJP: As Modi is for Swachh Bharat,  in Bangalore, we’re for Swachh Bengaluru. And for me – Swachh Sanjay Nagar. BJP has addressed the sanitary and garbage issue upto 80%. We will address the additional 20%.

(To INC) Your manifesto talks about 279 slums. Are you going to get rid of this and give them proper housing?

(To IND) You have contested before, what was your ambition then and what is your vision now?

IND: I contested in 2010 as an independent. Goals included garbage and roads. I have to change the system, and to change the system I have to get into the system, you have to elect me into the system. In 2010, people understood that I was educated and committed, some people voted for me. There are 40+ RWAs in Sanjay Nagar and they have promised to canvas for me. Since 2010, I have seen the road and garbage problems get worse. Since AAP is not contesting, I’m contesting as independent. Told other candidates that they need to be accountable. Goals include:

It is difficult for candidates to change ward. The party in power in the state changes ward reservation in a way that makes many candidates ineligible. What will you do if you are not able to contest again due to the reservation matrix? How will you stay connected to voters?

BJP: Even if I lose, I’Il still serve the ward. We have already done a health camp for the ward. We have made ration cards for people and built free public toilets. Attempted to clean garbage since garbage is dumped in many places.

INC: Have helped poor people get ration cards. Will get free healthcare and treatment for poor people and their children.

JDS: There are no bus stops and there is no drainage. People literally fight with me while campaigning. Because of the stench, you can’t even enter some areas. I want to create a legacy for the future generations.

Independent: Earlier I contested from Ward 18, and I’m now contesting from Ward 19. With RWAs, we are organising cycle days. To clear footpaths, you have to relocate vendors. Requested the MLA to create a vendor zone. Waiting for funds to get released, will get this done in 1.5 years. 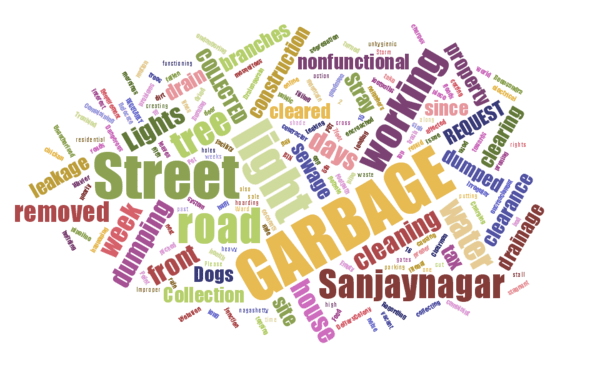 BJP: I’ll call meetings of committee and associations and address issues. Will do more work in Manjunath Colony. Wherever we have campaigned, we have made note of issues. Will address them systematically. We’ve laid underground cables. Manjunath Colony has improved a lot over the years under BJP rule.

JDS: Will address issues of ward and maintain cleanliness of ward.

IND: Sterilise stray dog, although it’s a sensitive matter (animal welfare and rights) and send them back to same place. When roads are laid, there are specifications laid down for tar thickness and width, etc.

How do people get to know?

IND: Conduct a survey about the needs of people. Hold public consent meets and take their inputs and take up projects accordingly. None of the candidates in previous elections spoke about issues, they only ask people to vote for them. Candidates only include people known to them in the Ward Committee. This makes them ineffective.  If I’m elected, I’Il ask the other candidates to be part of the Ward Committee, and invite residents to be a part of the committee. Conduct regular surveys of projects, remove free parking and make it paid parking, will generate revenue and people will think before parking. We’ll require playgrounds for the good health of children and promote cycle day.

BBMP has a debt of around 10,000 crores. What do you propose to do to increase revenue for BBMP?

BJP: We will consult senior leadership and Ward Committee and do what we can.

INC: Our senior leader HK Patil will reach out and do what is necessary.JDS: This is the first time I’m contesting. Will speak to ministers and get fund.

Independent: Property tax. Main revenue for BBMP. Increase rebate on property tax. And revenue through parking. Alternate days for odd and even numbered vehicles. Should levy high tax on buying of vehicles. One can buy a vehicle/car only if they have parking space for it. This will restrict purchase of vehicles. In addition,  composting and dry waste recycling. Big companies are interested.

Should BBMP be split?

Should Akrama Sakrama be implemented?

Independent: Yes, but it should be conditional.

Should there be directly elected mayor?

Should CM or the mayor have power over water supply, other public utilities?

Independent: Mayor. Because all these services are for Bangalore. CM would not be able to give so much time to Bangalore.

How will you stay in touch with your voters?

BJP: Will go to people.

INC: Difficult to go from home to home. I’Il make an office in the area and address it through it.

Independent: Through area heads in RWAs.

How much will you spend for this election?

JDS: I’m not spending money, I stood for election because of people’s faith.

Independent: I’ve not spent a single rupee. For an 8,000 rupee job, why should I spend 5 lakhs? Minimal expenditure (like pamphlets) has been raised by public, volunteers. We should have zero expenditure election campaigns.

(To IND from an audience member) Without people recognising you, how will you win?

Independent: RWAs have generated funds for me. For printing pamphlets.

Disclaimer: This is an edited version of the minutes of the meeting sent by NBF. Citizen Matters’ staff were not present during the debate.

How to deal with street dogs in Bengaluru

Street dogs can be managed and kept healthy with the help of BBMP – now that the Animal Birth Control programme has restarted in the city.

Nominations: how many can a candidate file?

Did you know that a candidate can file multiple nominations in his or her name? Did you know a person can file as a party candidate and independent at the same time?