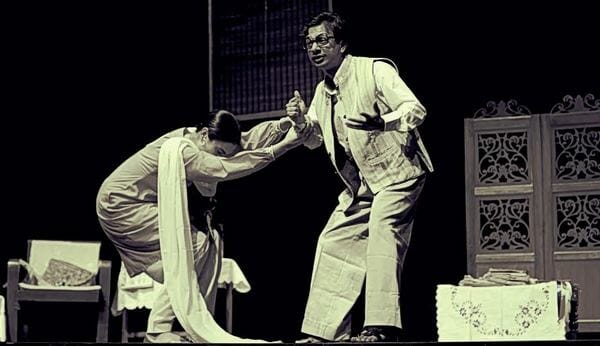 A still from the play, Sakina Manzil

On 14th April 1944, SS Fort Stikine, a cargo ship carrying explosives, torpedoes, mines and tonnes of cotton bales blew up into smithereens at Victoria dock, Bombay, owing to mismanagement. The play, 3. Sakina Manzil marks this less-reported incident of pre-independent Indian history in romantic sepia colour. Apart from tearing down the cargo ship and drilling a hole through Shashi’s house on #3 Sakina Manzil, the explosion rips apart her love life with her namesake. The two expectant lovers who are awaiting a birthday celebration with poha and shira are separated by the blast, only to be reunited in a clinic five decades later.

Ramu Ramnathan’s writing opens up a loose tile in the house and takes you though brick and mortar into a memory you seem to have forgotten. Being born in the 90s it is impossible that I could actually have had any recollection of pre-independence times, but just like the meticulously maintained ledger book of Comrade Shashi, a detailed account of the times – from A S Lime Juice to P C Barua’s films, the play almost makes you believe that it was indeed a part of your own memory.

The play assumes a style that snaps in and out of memory and narration, with the actors telling us the action they are yet to perform and perform it anyway. With dry humour and awkward encounters between the lovers, the first half of the play is zany and charming. The play steers clear of painting stereotypes and yet creates familiar characters. Shashi-ji is a sassy young woman who easily falls in love with an average-looking, medium-built, moderately intelligent man. And Comrade Shashi is a young man who is unimpressed by theatre and claims it is elitist, distributes underground papers on behalf of Congress and has been mistakenly admitted to a woman’s college.

Sashi-ji talks of her mother, who is the daughter of communist parents and is pre-disposed to adding a ‘comrade’ to everyone she addresses. Shashi-ji’s father on the other hand is an uneducated businessman who understands nothing but trade and even buys sugar from the black market in crunch time to make kulfis and ice-creams to sell it in wealthier parts of the town.

From a khoofia agent who has to resort to wearing ridiculous outfits to distribute banned Congress newsletters, to Shashi’s mother who foresees the farce of the Independence movement and predicts that it will be a mere handing down of power from the British to the privileged Indian, the play is a refreshing take on the freedom struggle.

Deepak Dhameja executes the play with simplicity and clarity, staying true to the excellently written piece of forgotten history. Both Puneet Sikka and Tarun Singhal give effective and engaging performances. Tarun Singhal (playing Comrade Shashi) executes both the young and awkward as well as the old and hiccupping with great detail. His comic timing and narrative clarity is commendable. Dim romantic lights, old transistors and carefully picked nostalgic music make for a memorable experience.

About Swati Simha 1 Article
The author has not yet added any personal or biographical info to her or his author profile.

A JP Nagar apartment complex celebrates a whole week of festivities, with fancy dress to music to painting contests.

‘I wish I had started using public transport earlier’

Ashutosh Sundaram has now decided to take a bus as often as he can and recommends it to all.