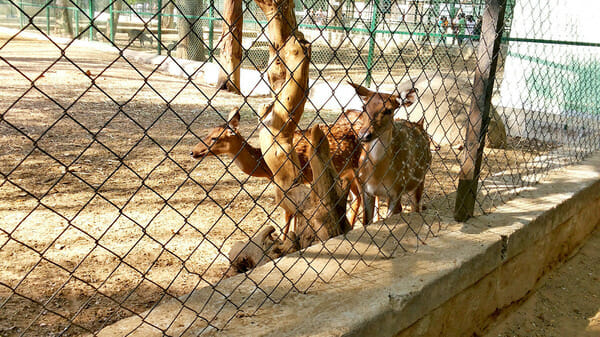 All the herbivorous animals have the chance of contracting Foot and Mouth disease, and need to be vaccinated. Pic: Shree D N

Here is a news for those who want to visit Bannerghatta Biological Park (BBP). Reason: Herbivorous Safari will be closed for at least next seven weeks as Foot and Mouth Disease has broken out.

On Monday, September 23, 2013, four animals – three Spotted Deer and one Neelgai were reported to have died due to this. The Park officials spotted the symptoms in the animals on Sunday and thus as a precautionary measure cancelled all safaris from Sunday itself.

The park caretakers and officials along with a team of 10 veterinarians from the Institute of Animal Health and Veterinary Biologicals Sciences, Hebbal, are working to medicate all the herbivores here.

What is Foot and Mouth Disease?

This is a viral infection, which occurs in cloven hoofed herbivorous. The virus causes high fever in the animal, blisters in the mouth and feet and ulcers. In severe cases it becomes fatal. The disease spreads through air upto a distance of five kilometres. It also spreads by saliva – if an infected animal drops its saliva while feeding on grass, and if this saliva is consumed by another animal- the disease spreads.

Speaking to Citizen Matters, BBP assistant director, veterinary services, Dr BC Chittiappa says: “We got to know of the disease on Sunday when the Neelgai showed the symptoms of high fever and salivation. We then consulted the veterinarians at Hebbal institute and they too confirmed the disease. Following their advice, we have decided to close down the herbivorous safari – spread across 121 Hectares- for 7-14 weeks.”

“Though no other animal in the zoo is showing any symptoms, as a precautionary measure, we are administering vaccination and medication to all the herbivores in Bannerghatta (in the safari and zoo). This includes around 500 animals – including 17 elephants, lone Zebra, Black Buck, Neelgai, Sambar, Spotted Deer, Barking Deer and others,” he added.

The medication is given throw darting technology, which is being administered by trained veterinarians. The team is also administering oral medication to the zoo animals (which are kept in enclosures), including the zebra, elephants, Barking Deer, Black Buck and Chinkara. Apart from this, fruits smeared with powdered medicine are kept in baskets in the herbivore safari areas for animals to feed on.

A similar case had earlier happened in 2006-07, where some animals had died due to the disease. But the outbreak was curtailed.

National park can get affected

Zoo Authority of Karnataka member secretary, R S Suresh says: “All the animals are being vaccinated. But what is worrying the most is that the zoo abuts Bannerghatta National Park (the forest), so there are chances that the herbivores there could get infected, because the disease also travels through aerosols. We will have a meeting with the forest officials and the government and take a decision on how this can be checked.”

In the meantime, he points that most animals in south India are affected by this viral disease. The BBP has 16 villages on its border. It could be that the animals here are infected and the wild boar which move freely in and out of the forest (abutting the herbivorous safari) are carrying the virus. Thus, the animals here got infected.”

“I do not expect any more deaths to take place. The safari will be closed for some time. The carnivores do not get affected by this disease. But precautions are still being taken. We do not want an outbreak. We are striving to immunise as many animals as possible at the earliest,” he says.

Dr. M D Venkatesh, director in- charge of Institute of Animal Health and Veterinary Biologicals Sciences, Hebbal, says: “We are supporting them in every possible manner. My teams of veterinarians are collecting samples and testing them, while another team is in BBP helping the staff there.”

In the meantime, the ZAK and BBP officials say that vaccinating the cattle in the villages and urban areas is the job of the Department of Animal Husbandry & Veterinary Services (DAHVS). Since BBP is close to human habitation, it is always vulnerable.

Dr C Venkatesh, joint director- farms from DAHVS, says: “All herbivorous animals are vaccinated once in every six months with the vaccine, sponsored by the government. It is like Pulse Polio vaccination.”

He points that the disease alone cannot cause death, it makes the animal suffer in pain to a very large extent. “So far, of the total 1000-odd deaths in Karnataka in last one year, we have observed that the virus is mixed with hemorrhagic septicemia (a bacterial disease) which aggravates the condition leading to death,” he says.

He points that the disease could have spread as some animals could have been left out during the vaccination programme. Animals straying from neighbouring states could also be carriers, or humans who are carrying the virus could have infected the animal.

Every year the animals are vaccinated during August- September and February- March. So far in Bangalore Urban (which includes Bannerghatta and Anekal), 77,000 cattle have been given the Foot and Mouth disease vaccination, of the total of 1,24,000 animals. The vaccine gives the animal an immunity of normally 6 to 9 months, depending upon the age and health of the animal.

But as a precautionary measure, the department is vaccinating once in six months. People are advised not to eat goat, sheep and beef during the outbreak of the disease, as the dead animals could be infected and the meat is not healthy for consumption, says Dr Venkatesh. For now, the concerned departments seem to be feeling that it is not an outbreak yet.

Range Gowda, BBP Director, adds that the situation is improving. The infected animals are showing signs of recovery. However as a precautionary measure the herbivores safari will be closed for a minimum of two weeks, after which they will review the situation and take a call on whether to extend it or not. There have been no reports of death on 24 September, and the situation is improving. The bear safari will also be closed for two weeks, as a precautionary measure.