Gone are the days when security and surveilence depended on security guards, thanks to the technical advancement. CCTV camera industry is a booming business today, with every shop, showroom, mall, apartment and office complex and hotel investing in electronic modes of security.

A small yet significant part of this growing industry in Bangalore is Sadiya Sarwar. Daughter of an automobile engineer and a mother of two, Sadiya started her business in the year 2007. She credits her father for having taught her the ways of this field. “The year I started my company, C2i solutions, the CCTV camera business was trending. It was a booming industry. Also, when compared to other industries it was quite manageable and reputed, especially for ladies,” she explains. Born and brought up in Bangalore, she holds a BA in Urdu and degree in Fashion Designing from NIFT, Bangalore.

After the death of her father, Sadiya began to manage the business single-handedly. Presently the proprietor of C2i Solutions, she has several engineers and technicians working under her. A self-learner, she herself has imparted training to most of the technicians working with her.

But all was not this hunky-dory in the beginning, she says. Being a woman working in a technical field, it was hard to go and ask for deals. “It was very difficult for them to put their trust in me and it was a great task to convince them. I had to give them my 100% commitment,” she remembers. 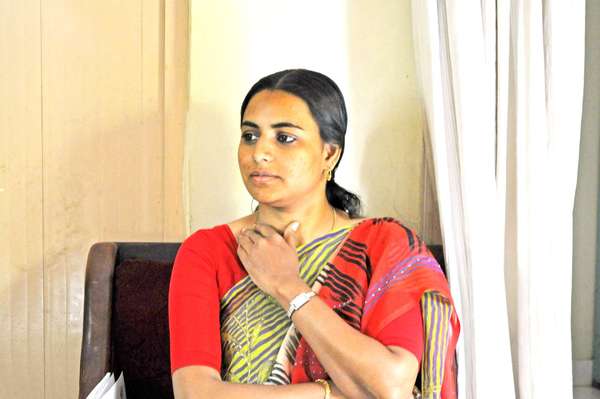 However, till date none of her customers have ever gone back dissatisfied, she explains. “They come back to me saying that it is easier to believe a woman than a man. They tell me that a man would take about a week or more to finish what I would complete in about two or at the most three days”. She credits this trust to her hard work. As customers began liking her work, not only did they prefer to work with her on their future projects, but also referred her to other prospective clients.

‘Success did not come easy’

Making one’s presence felt in the business is as important as working hard and being sincere, she feels. “Initially I used to go and approach people because then it was important for me to tell them that I am into this field. I used to go door-to-door, explain about the business, distribute pamphlets, give cards, etc.” Today, after over five years of relentless work things are looking better, Sadiya feels. “I’m managing big projects like RTNET in Singnayakanahalli. They are group of educational institutions with seven institutes in Bangalore, apart from hospitals and old-age homes. I’m handling their entire project,” she says.

While her technicians are hired on a daily basis, Sadiya has two permanent engineers who manage installations and networking. “In case there’s no one, I do it by myself,” she says matter-of-factly. Sadiya is also a channel partner to Zicom, a company that manufactures security and safety equipment. She sources her materials from them.

However good a businesswoman you may be, your customers always come with their own preset requirements and demands. So has she ever faced any problems? “Nothing of that sort. Customers don’t come with any unreasonable demands but they always want their work to be completed within the lowest budget and with good quality,” Sadiya says.

Since a customer may not know how a CCTV camera and its installation works, she also gives them suggestion when required. A camera may cost anywhere between Rs. 2000 to Rs. 2.5-3 lakhs depending on its function, use and the installation. “So based on customers requirement, the space, the placement (whether indoor/outdoor), I suggest the kind of camera. Depending on what has to be focused/viewed I also suggest the best place to fix the camera. Even the number of cameras required for a building is decided only after a site survey” Sadiya explains. “I supply them with monitors also. These I get according to the kind of brand, budget my clients have in mind, whether they want TV/ monitor, how much space they can spare etc.” she adds.

But it’s not always safety and security that people want surveillance cameras for. She narrates an incident of a person from Ganganagar who called up and asked for a camera, but a hidden one. “When I questioned his intentions, he revealed that he wanted to keep an eye on his wife!” she laughs. “So I declined. Not only will it cause a legal problem for me but it is also against my ethics. Being a woman I can’t do this to another woman. I told him I’ll give him the camera but I won’t go beyond that”.

Presently she is the only woman in this field in the whole of Karnataka. “There may be other women who deal with technical aspects from within office but nobody else does field work and installation”.

So where is it that she faces competition from? “Men!” she exclaims. She considers almost all men as her competitors. “They don’t want me to stay in this field,” she says. She offers the same products and service that her other male counterparts in the business offer. But what ultimately brings the customers to her, she feels, is her sincerity.

When a thing is new, it has a sense of novelty to it. But as days pass, this novelty is lost. Similar is the case with the CCTV camera business. Sadiya says that a lot of people enter into the business, but they close down very soon and move on to something else. She, on the other hand, has been going steady for over five years now and that’s what has helped her sustain. While anybody can install a camera, servicing is equally important too. And that’s where Sadiya believes she scores because her she provides prompt and quick service.

Career out of necessity

Four months after the birth of her second child, her father passed away leaving her to take care of her widowed mother and a brother. “My brother was still studying and my mother was alone. So my in-laws asked me to stay at my mother’s place and work. It was more feasible than any other field so I decided to take it up full time. I did not have to answer anyone and I could come back home and attend to my children whenever I wanted,” she says.

However, now the reality has changed a bit, though it’s good from business perspective. “I don’t know when I’ll get home from work. For instance in a jewellery shop, I take up installations only in the night once the showroom has been shut down and the jewellery has been locked away. This work may take up all night and go on till 2am or 3am in the morning,” she says. Even where the frequency of work is concerned, there is no stability. “I get two to three orders at a time. So I’m fully occupied that month. Sometimes I don’t have work for four to five months straight. But if the order I get is big, then it’ll go on for six to eight months. So that balances things out. These big orders, like RTNET and Sapthagiri usually involve installation of 60-70 cameras,” Sadiya says.

When asked about her plans for the future, she talks about new projects that are coming up in Chikmagalur and Hubli. Her projects are currently operational only in Karnataka but she has plans to expand in Andhra Pradesh and Tamil Nadu as well. “ In Tamil Nadu and Andhra Pradesh the VAT is completely different. In Karnataka we charge 14.5% whereas they charge 5.5%. So a large number of customers are going to Chennai and getting materials from there. We only have to do installations. So it’s becoming difficult to maintain business here,” she avers.

Regardless of all the hurdles, Sadiya has now made a name for herself in the business. RTNET Group of Institutions has awarded her for best service. Stree Shakti, a women’s organisation from Kolar is all set to make a documentary on her journey.

“Even now Muslim women in villages are not given freedom. They think that fieldwork is harsh. But I personally believe that if we are up to our mark, then nobody can point fingers at us. If we are strict then no one can behave or talk in a wrong way. Even when I go for installations, I don’t take off my burqa. I even climb that ladder wearing it. My family is supportive too. I devote myself to my work. My husband and my family members feel that when I’m not doing anything wrong then there is no point in stopping me from going to work” she concludes.

Pre-primary section in govt schools: this Bengaluru NGO creates a model to follow

Even as the Chief Minister announced in the budget of including pre-primary section in government schools, an NGO quietly worked on creating a model for such schools. What is this idea all about?