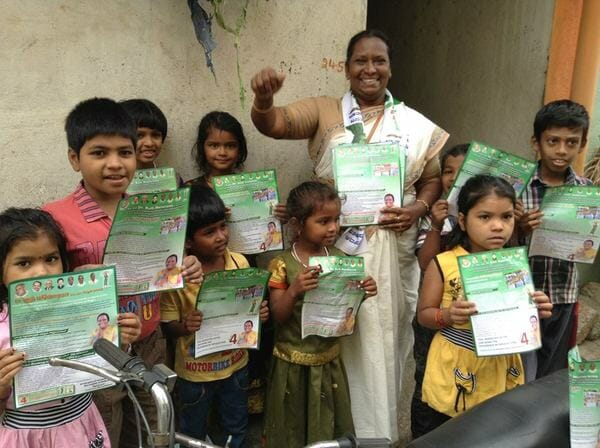 Ruth Manorama, womens’ rights activist awarded with Rights Livelihood award, contesting as a JD(S) candidate from Bengaluru South, spoke to Citizen Matters on her unexpected entry into politics and her goals. Excerpts:

Why do you want to go to parliament?

I have been advocating for women in politics. There is utter criminalization, communalization and corruption of the political system. The capacity and capabilities of women should be used to understand how poverty and inequality impacts development. Women should be involved in politics internally, not just externally.

Women are able to talk and engage with the government and other agencies even though they continue to be suppressed by men. They are rising, asking questions about their lives, the degrading environment and accessing the minimal resources despite challenges. It is time that women started joining politics at a higher level. Incidentally, some of them have been trained in tabling amendments and parliamentary processes and procedures. And, I have always been interested in being a part of the political process, directly.

Why did you choose JD(S)?

I did not choose, but was approached by Mr. Deve Gowda.

Are you related with JD(S) party for long time?

I was not associated with JD(S) previously.

Do you think JD(S) will support anti-corruption initiatives?

Well, the BJP and the INC are much more corrupt. Also, the BJP and its associated cadres are very communal. The Congress party talks secularism but one is unsure of its intentions.

How are you funding your campaign this time? Whose money is it – personal, corporate funding or party funds?

I told my party that I have very little funds and that I would work hard to raise. I have received small contributions from friends and family. The party is releasing money, but not crores of rupees, to print handbills – which are also expensive to print – and assigning volunteers. Every political party and the state should allot separate funds to women to enable them to be active in politics.

What do you think about your powerful opponents – Ananthkumar and Nilekani? Do you think you will win against them?

My party has informed me that we are gaining momentum in Karnataka. My opponents have more money but are scared with our growing acceptance. Ideologically I am not afraid. I am giving a tough fight to my opponents.

Why are you in JD(S), not any other political party?

JD (S) has invited and given a ticket to a grassroots women’s activist for the first time, although I was not a member of the party. It is a recognition of my work and I decided to honour that.

You are an international awardee. Independent of whether you will become an MP or not, what do you plan to do in Bangalore to improve livelihoods of poor?

I will continue to be in party politics and work locally and nationally to pull more women into politics. And I will keep striving for the emancipation of women, Dalits, urban poor and other socio-economically marginalized groups inside and outside the political agenda.

What a pity! Foreigners miss Mayor’s presentation on tackling garbage!

Shouldn’t BBMP’s initiative begin with proper instructions to its own staff, instead of issuing large, half page ads in the papers to “educate” citizens on the importance of segregating rubbish?

If you are one among the lakhs of voters of CV Raman Nagar, this is what you need to know! Background information Find your constituency Understand the role of the MLA Learn all you can

The ups and downs of Outer Ring Road: The purpose of infrastructure

Flyovers and underpasses cannot be seen as isolated projects and must be viewed as a part of the overall road network in Bengaluru.