The Karnataka government introduced provision for self declaration in many services by various departments recently. The scheme is expected to be implemented in most departments by mid-July. However, here is the hitch: the mechanism to check the truthfulness of the statement made in the declaration is not foolproof yet. This calls for more transparency from the government, in order to prevent corruption. 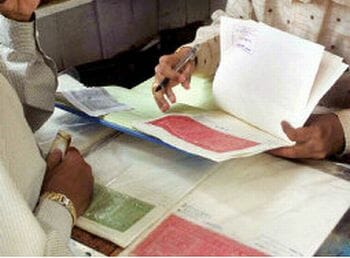 The first department to fall in line is the Revenue Department. An official from the Department of Administrative Reforms says, “Revenue department has already introduced this initiative with citizens getting most of the certificates (caste, income, profession etc), social security pensions (old age pension, destitute widow pension, physically handicap pension, Sandhya Suraksha Yojana) etc without submitting affidavits with application. Instead they can just give one self-declaration in plain white paper, and an identity card.”

Scheme meant to be citizen-friendly

Once the scheme takes off, one does not have to run from pillar to post to notarise affidavits for availing many basic services. On April 28, 2014, after receiving approval from the State Cabinet and 25 government departments, Karnataka’s Law and Parliamentary Affairs Minister, T B Jayachandra had briefed the press that in two months, the need to submit self-sworn affidavits for basic services would be gone and all the departments would soon accept self declaration.

This act of making administration citizen-friendly was taken following a proposal by the Department of Public Administration and Reforms, Government of India, which followed the successful implementation of the self declaration programme in Punjab.

Aiming to save time and money

Until now, to avail certificates from government departments, one had to submit affidavits attested by notaries or magistrates. Many a times, procuring such a simple document would cause unnecessary delay and spending of money. Buying Rs.20 stamp paper, locating a deed typewriter and paying whatever sum the notary or the magistrate would demand as their fee — were tiresome. With the new procedure, the government aims to eliminate all these and makes it as easy as taking a white sheet, pen, writing it and handing it over.

State cabinet has ordered all departments to study their services and report back within two months about the services that can make use of self declarations instead of sworn affidavits.

How are the self declarations checked?

Once the documents are submitted along with a self-declaration, the enquiry officers appointed in each department will go on field and verify the documents. They will make their report on the findings of their field visit and submit it to the officer in charge of sanctioning the certificates. Therefore, the onus lies with the department officer. In Revenue Department’s case, it is the Assistant Revenue Officer or Revenue Officer who will sanction certificates.

Principal Secretary of Department of Public Administrative Reforms Shalini Rajneesh explains how the department will check false declarations. “We have our own staff who is appointed and paid to carry out local enquiry. Each service has stipulated time period for enquiry and they need to investigate within that time frame.”

So isn’t there a scope for corruption? Yes. If somebody wants to be corrupt, they can. And if a citizen wants to be a victim or a fraudster, he/she can.

Will countering corruption be a challenge?

Says an official on condition of anonymity: “If the verifying officer takes money against the law, it would be very difficult to catch hold of him. What can we do of such people? There is always an escape for such people but with the help of citizens we can handle such corruption… Corruption is an internal problem at the grass root level. It is possible to tackle it only with the help of proactive citizens. Citizens can complain against such officers to their higher authorities in such cases, make use of Sakala and RTI to get to know the right procedures to follow, etc.”

“Notarising the documents doesn’t add any value to the process. The government should trust its citizen directly rather than relying a notary,” says Sridhar Pabbisetty, who is the Chief Enabler of Centre for Inclusive Governance, supporting the decision of the government to do away with affidavits. “The next step is to ensure transparency in the system, where one can look up all the declarations that impact one’s life,” he adds, suggesting means to tackle corruption in all levels through RTI, Sakala and other ways.

“Government should also focus on making it easier for citizens to access the information that impacts them,” he suggests, pointing that section 4.1.a and 4.1.b of the RTI act should be followed by all government departments, which is not done at present.

The above sections mandate the government departments to make public the particulars of the organization, functions and duties, rules, regulations, instructions, manuals and records, statements of boards, councils, committees, directory of officers and employees, their monthly remuneration details, budget details for the financial year, particulars of facilities available to citizens, name and designation of Public Information Officers. These help the public in countering the irregularities.

Important services not included in self declaration

Not all services can be brought under self declaration program. An official from the Department of Administrative Reforms said, “Services that statutorily demand affidavits will be exempted from this programme.” These services include, “Signing MOU (agreement) in affidavit to get work orders after tender process is over, site allotment from BDA and other urban development authorities, receipt of payments as compensation from government (especially after land acquisition-KIADB) etc.”

How should one give self declarations?

Self declarations can be given in plain white paper duly signed by the applicant. The letter must have the personal details like name, age, place of residence, taluk, state and what does he or she want to procure.

At the end of every declaration, one needs to write one statement stating that, “All the information provided is true to the best of my knowledge. If any information is found to be false, I understand that it will be held punishable under the appropriate IPC code.”

Shalini Rajneesh confirms that there is not going to be any standard declaration form: “We don’t have any standard text format, as every service has a different format to follow. So we can’t standardise them. They have to make their own declaration.”

According to DPAR, this will not cause any problem. An official on condition of anonymity, adds: “However, the departments cannot reject the declaration given by the citizens, for having no standard text. Based on the given declaration, the officers need to go on field visit and verify the documents and submit their report.”

It is also possible that over time, each department can develop their own standard declaration forms. One can also put the text that would have gone into the notarised affidavit.

Can we self-attest the certificates?

This self declaration programme doesn’t give power to the deponent or the individual applying for certificates to attest his own documents or certificates. It is also not applicable to affidavits before the Court.

What if the information provided is false?

Government has gone ahead with this program as penal provision for providing false information is already in place. Indian Penal Code sections such as 177, 193, 199 and 200 deal with the implications of any false information/ evidence/ disclosure/ declaration made by the people. The imposition of penalties, fines, registration of criminal cases and even imprisonment can be done.

Section 199: False statement made in declaration which is by law receiva­ble as evidence — whoever, in any declaration made or subscribed by him, that will be given to any court or public servant or other person as evidence of any fact, makes any statement which is false with full knowledge of it being false, can be punished in the same manner as in the case of false evidence.

Project to take off in mid-July

The government authorities have asked all the departments to gear up for the process,Shalini Rajneesh, Principal Secretary Department of Administrative Reforms says: “Two months’ time was given to implement this plan. Already a month has been passed. By mid-July, we want all the departments to do away with the need to procure notarised affidavit for some services at least. We have sent notification to all the heads of departments to soon adopt the programme and issue notices that will ban the use notarised affidavits and start accepting self declarations instead, wherever possible.”

To know how successfully Punjab government introduced not only self declaration, but also self attestation of certificates in some cases, Read this.

How should apartments and gated communities handle transformer maintenance?

Transformer is a critical part of electrical installation in a gated community. This article explains the maintenance steps.

From Form 6 to Voter ID card

Did you ever wonder how your name gets on the voter rolls in Bengaluru? Here’s a quick run through, slideshow included.