Arun (name changed), a driver by profession, admitted his three-and-half-year-old daughter to a prestigious “international” school at Cox Town in Bengaluru around three years ago. His daughter was lucky enough to get a seat under the 25 per cent quota of the Right to Education Act. The Act intends to provide free education to children from disadvantaged and weaker sections of the society in private unaided schools.

The school was located at a distance of half kilometres from Arun’s home and his daughter would walk to school everyday. In fact, the school’s positioning served the purpose of ‘neighbourhood schooling,’ that the Act stresses on. The neighbourhood schooling concept of the RTE Act’s 25 per cent quota, says the child belonging to disadvantaged section be given free admission in a private unaided school in the same ward in which the parents reside.

But in 2016 June, Arun and his family got a shocker when they were informed by the school authorities that the school campus was shifted from Cox Town (Ward No. 85) to a new premises at Kadusonappanahalli in Kannuru. The new location was 15 km away from Arun’s residence and the area does not fall under BBMP limits.

The school, which was liable to provide free education to RTE students, now placed a demand before the parents of RTE children. Arun and the rest were asked to pay transportation fee because children had to be transported from Cox Town to the new school campus on daily basis. And the fee was huge – at least it seemed huge for parents like Arun who live a moderate life. They were charged transportation fee of Rs 25,800 for an academic year which the parents were asked to pay in three instalments.

While Arun paid Rs 8,600 as the first instalment, he didn’t pay the rest. “I couldn’t afford to pay the remaining fee,” he told Citizen Matters.

Having already violated the provisions of RTE Act by shifting the school premises and charging fee for transportation, the school threw up another shocker. A month ago, parents of RTE children were called for one-to-one meeting with school authorities and were informed that the school has got minority status, hence will be exempted from the RTE Act starting next academic year.

“I was asked to pay a total fee of Rs 1.20 lakh which includes fee for tuition, transportation, uniform, books and shoes. I was given two options. Either to pay the said amount during the admission if at all I wish to continue my daughter study in the same school or look out for other schools,”a completely baffled Arun says.

Perplexed and worried over how to pursue this case, Arun approached the Block Education Officer of North-3 Block as the school’s old premise was located in this block. “The BEO did not respond positively. He just told me that the education block of the school has changed due to the shifting of school to Kannuru. He even said that North-3 Block will not reimburse the school fee of RTE children to this school as they have now shifted to South Zone,” Arun says.

Parents like Arun whose children are studying under RTE quota in this particular school are in a fix now.

This is just an instance of how the private unaided schools in Bengaluru which have the mandate to abide by the Right to Free and Compulsory Education Act, 2009, are evading the burden of teaching underprivileged children for lesser fee.

Take this case for example. Bharathi Somashekhar is a housewife and a resident of Kurubarahalli. Her family income solely depends on her husband who is an auto rickshaw mechanic. Her two girl children have got seats under RTE quota and they study in two different private CBSE schools in the neighbourhood.

When Bharathi admitted her elder girl to a private unaided school three years ago, the schools asked her to pay additional fee for uniforms and textbooks. Unaware of the RTE rules, she paid a sum of Rs 10,000 during the first year. By the time her daughter entered the 2nd grade and when the school again placed a demand for additional fee, Bharathi refused to budge. By then, she was clear that the RTE Rules barred schools from discriminating quota children by not providing them textbooks, uniforms, library and sports facilities.

This time she was stern that she wouldn’t pay a penny. She refused neither to pay nor buy uniform, shoes and text books for her child. “Last year my daughter studied without the help of textbooks and she performed really well in her exams. But this year, just to keep my daughter’s morale high, I got the photocopy of all textbooks for her. My two girls, who are in 1st and 3rd Std go to school in colour dress,” Bharathi tells.

So how has been her experience of refusing to heed to the school’s demands? “It has been tough. There were times when I and my children were insulted just because we refused to budge to their demand. When the RTE Act clearly states that additional fee shouldn’t be collected from parents, I don’t understand why are they imposing it on us.. ” she says.

Bharathi, along with yet another parent, has recently approached the High Court questioning the school authorities for imposing additional fee. She hopes this will result in a court order in her favour which would in turn help a lot of parents who are coughing up money for children’s education.

This is the fifth year since the Right to Education Act was introduced in Karnataka, after the State government framed RTE Rules in 2012. The officials at the Department of Public Instructions pat their own back when they claim Karnataka tops the country in implementation of RTE 25 per cent quota reservation. But on what basis is the claim made when the Ministry of Human Resource Development has not yet conducted a nationwide survey or study on the effectiveness of RTE implementation?

“Yes, we agree that no study has been conducted so far to measure the success rate of RTE. But Karnataka is the first state to go for online admission process. The complete online admission process (introduced in 2015) coupled with Aadhaar authentication for admitting the child (which is introduced this year), will make the system fool-proof and we hope the MHRD will recognise our achievement in the coming days,” says an official at the Department of Public Instructions who handles RTE cell. He wanted to remain anonymous.

This year RTE admissions are yet to start due to technical glitches in inclusion of Aadhaar biometric verification systems, which is being worked on by the department.

While the RTE admission season is just about to begin and the Department of Public Instructions is battling it out to make the procedure smooth, how has been the implementation of RTE so far in Bengaluru?

According to the data available with the Education Department, the total number schools that came under the ambit of RTE for making admission to LKG in Bengaluru last year was 1,184 and the number of schools that had to admit RTE students for 1st grade was 1,359. 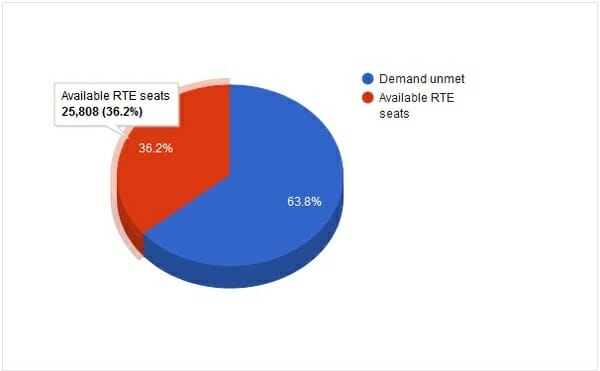 About 2/3 of the demand for RTE seats remains unmet in Bengaluru.

Of the 97,000 RTE seats allotted in Karnataka last year, as many as 25,808 seats were allotted in Bengaluru alone. But the demand for RTE seats is huge. The total applications received for the seats available in Bengaluru is 71,250 for the year 2016-17, which is nearly three times more than the number of available seats. The department follows the online lottery system to choose the beneficiaries and the lucky ones make it!

RTE covers all schools on paper

So how has the implementation of RTE Act been?

“From the Government’s side, with respect to the reach and coverage of all private unaided schools, the reservation has been implemented in all eligible schools in Bangalore,” observes Puja Minni, Senior Research Associate at Centre for Budget and Policy Studies (CBPS).

CBPS has done two studies – one in 2013 and another in 2016 – on 25 per cent RTE quota in private unaided schools in Bengaluru.

Commenting on the effectiveness of implementation Puja says, “we could say that coverage has been extended. Segregating the high priority categories (HIV, orphans, street children, migrant worker, physically challenged) and weaker sections (low income group) has also ensured that separate applications can be made and considered for final allotment. However, there are issues of exclusion of the real intended beneficiaries.”

During its study, CBPS team has come out with several observations pertaining to the flaws in implementing RTE. Not just CBPS, various other independent and statutory bodies including non-government organisations that have formed RTE Task Force, RTE parents associations, Karnataka State Commission for Protection of Child Rights too point out at the lacunae and challenges surrounding RTE.

The next story of the RTE series will explain the issues in implementing this education law that aims at providing quality education to all.

Does Karnataka’s voter list have errors? Here’s what we know

Voter list is referred by everyone including officials and political parties. There are indications of the list having serious errors this time. Can the errors be rectified?

After their notes recounting harassment went viral on social media, both senior police officials and mainstream media took note of the incident.

Turf grass: A pretty business that costs much more than just money