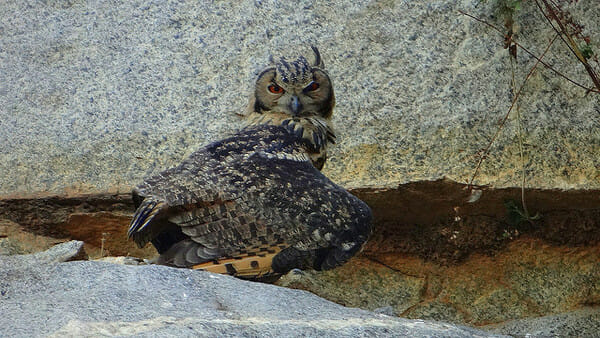 I’ve always been drawn to owls. The Rock Eagle Owl, also called the Indian Eagle Owl, has been one of my favourites; I’ve sighted it at Bannerghatta, Turahalli, and at various other locations. For the past few years, we’ve been watching some of these majestic birds making their homes on the rocky outcrops of the highway built by Nandi Infrastructure Corridor Enterprises (NICE), around Bangalore.

As we were returning from our trip to Sakleshpur, where we did a bird census for a coffee estate (a very satisfying assignment, more about it later!) we decided we would detour on to this toll road and try our luck with the owls. And we were rewarded for our efforts!

We saw a rocky habitat where we spotted these owls. I zoomed in further. and some more, to show the excellent camouflage when the bird’s head is turned away, and those amazing eyes were not visible.

The Rock Eagle Owls were earlier treated as a subspecies of the Eurasian Eagle-Owl (Bubo bubo) but are now considered as separate. The wiki says, “They are seen in scrub and light to medium forests but are especially seen near rocky places within the mainland of the Indian Subcontinent south of the Himalayas and below 5000 feet elevation… Humid evergreen forest and extremely arid areas are avoided. Bush-covered rocky hillocks and ravines, and steep banks of rivers and streams are favourite haunts.”

Wiki adds: “The nesting season is November to April. The eggs number three to four and are creamy white, broad roundish ovals with a smooth texture. They are laid on bare soil in a natural recess in an earth bank, on the ledge of a cliff, or under the shelter of a bush on level ground. The nest site is reused each year. The eggs hatch after about 33 days and the chicks are dependent on their parents for nearly six months.”

They were quite enjoying the breeze, closing their eyes and letting their feathers ruffle. They spend the day under the shelter of a bush or rocky projection, or in a large mango or similar thickly foliaged tree near villages. Their diet seems to be very varied: “Their diet through much of the year consists of rodents, but birds seem to be mainly taken towards winter. Prey species of birds include partridges, doves, Indian Roller, the Shikra and the Spotted Owlet. Birds the size of a peacock are sometimes attacked; Bats were also preyed on, and mammals the size of a Black-naped hare may be taken.”

As if to bear this out, we saw several Peafowl on the fence nearby, and squirrels scampering around the area. Alas, all is not well in the world of the Owls. The Wiki notes: “Like many other large owls, these are considered birds of ill omen. Their deep haunting calls if delivered from atop a house are considered to forebode the death of an occupant. A number of rituals involving the capture and killing of these birds have been recorded. Salim Ali notes a wide range of superstitions related to them but notes two as being particularly widespread. One is that if the bird is starved for a few days and beaten, it would speak like a human, predicting the future of the tormentor or bringing them wealth while the other involves the killing of the bird to find a lucky bone that moved against the current like a snake when dropped into a stream. Belief in these superstitions has led to the persecution of the species in many areas by tribal hunters. The capture of these birds is illegal under Indian law but an underground market continues to drive poaching.”

It is sad that superstition seems to rule the life prospects of these beautiful birds…and another matter of concern with the owls shown here is the rampant construction going on in the area where the owls are. As of now, the birds seem to have been displaced from many of their locations, and were last seen only near Hosekerehalli. I do hope the Rock Eagle Owls of the NICE Road remain, sentinels of our urban wildlife, for a long time to come! Here’s a video of two of the birds, and the rocky habitat:

Should you go to the NICE Road to sight these birds, remember that they are rarely seen except at dusk. Please keep your distance from them, and use a good pair of binoculars or good zoom lenses to observe and document them. They are under enough threat from urban development, let us not add to the difficulties of their survival! Also, remember that you are on a highway, so keep the car moving slowly. If you stop the car and get out… be quick, and be careful.. remember that on the highway, you yourself are at risk!

The man who made Bengaluru proud through wildlife activism
A moth, not a hummingbird

The bird of State, with blue throat!

It takes mud baths to cleanse itself and get rid of ticks. Our State’s bird, Indian Roller, is a bird-watcher’s delight.

Ever thought about all the sanitary pads that end up in landfills? Is there an alternative? Here’s a user’s perspective on making the shift to menstrual cups.

Trees tell the most interesting stories. These two trees at Lalbagh Gardens are dancing arm in arm.