Varthur lake, the second-largest lake in Bengaluru has been an unfortunate victim of unplanned urbanisation and industrialisation. With the growing population and the inflow of commuters to Whitefield and Sarjapur on a daily basis, the infrastructure of the roads circumventing the lake, specifically the Varthur bridge and the Varthur-Gunjur stretch, are unable to handle the congestion.

This has pushed local residents to demand the widening of the road. While the BBMP had sanctioned the work on repairing the bridge, work has come to a halt due to protests by surrounding landowners who are afraid of losing their land. The road-widening also raises a crucial question regarding the impact of the road-widening project over the Varthur lake which is already facing numerous issues due to the illegal diversion of water to Kolar, encroachment, alarming rates of pollution and continuous inflow of untreated sewage water.

During the election campaign this year, promises made by the candidates included easing the traffic congestion in Whitefield via building more roads connecting the area to rest of the city. The underlying implication of this promise included encroachment of the Varthur lake to ease the congestion which is faced during peak traffic hours at the Varthur Kodi junction. The road-widening, while has been welcomed by many, is also being contested due to the ecological concerns and displacement of the landowners living around the lake.

The Varthur lake has a long history over thousand years long since its inception as a man-made lake during the time of the Ganga dynasty. Over the years especially in the last decade, the lake has been seeing a rapid decline in terms of purity thanks to unplanned urbanisation, industrialisation and eutrophication caused by the excessive inflow of sewage water. What needs to be considered in the road-widening and bridge improvement projects is the impact that it will have on the ecosystem of the lake.

Projects being carried out on Varthur Lake

The road-widening project, in particular, has thrown up concerns. Road-widening inevitably requires more land and landowners around the lake refuse to give up their land for the purpose of constructing the road. It’s not just the matter of building the road but what it would mean to the people living in the area, what will their stake in the project be and how it will impact their daily lives. But the road-widening project is only one of the issues that the area faces today.

Apart from the pollution, the diversion of lake water to Kolar presents a new issue. Many notices were sent by the KLCDA (Karnataka Lake Conservation and Development Authority) to the BDA between September and November 2017, asking the latter to stop the construction of a road.

The recent NGT order states that no industrial and commercial activities can be carried out within 75 m of the lake’s buffer zone. However, the Minor Irrigation Department laid a pipeline in the lake for the water diversion project, in violation of this NGT order. 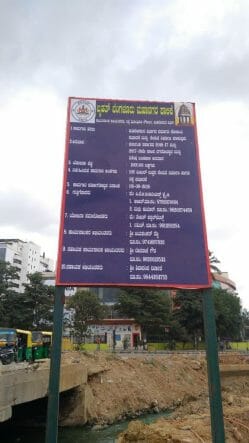 The Varthur bridge, which circumvents the lake has also been found to be needing repair. As the bridge needs restoration heavy vehicles like trucks are officially prohibited from using the route although city buses still ply on the road.

The board was put up when BBMP had begun work on the Varthur bridge by the BBMP, Mahadevapura division-

Over the years many citizens have come together in Whitefield to engage in dialogues about traffic woes on Varthur bridge and the condition of the Varthur lake. There have also been numerous drives, campaigns and strikes demanding action, but they have not been successful in bringing any visible change to the area. A drive past the lake during peak hours shows everything that’s wrong here. On a bad day, it can take up to five hours to make it across the Varthur bridge.

On 19th July 2018, an indefinite hunger strike was organised at the Government College in Varthur for the road-widening project. The BBMP had previously handed over the contract for road-widening to a Kerala-based company but when the landowners who refused to give up their land protested, the project came to a halt. The group gathered at 7 am, demanding the following-

The strike is still on, and is led by activist, A Nagaraj, a resident of the area. The BBMP hasn’t responded yet. The hunger strike will continue till the MLA of the constituency and the BBMP officials give them a letter in writing ensuring that their demands will be met, said Nagaraj.

Residents and auto drivers at the protest shared why the road-widening project is so important to them: “A minimum of 10 traffic policemen are deployed every day to manage the traffic along this stretch despite the work by the police the traffic still cannot be controlled. 10 policemen are the minimum requirement for this 1 km stretch alone. For the Varthur-Gunjur stretch, up to 18 policemen are required on a daily basis.”

However, Dr T V Ramachandra professor at Indian Institute of Science, Bengaluru, who is an eminent environmentalist believes that the road-widening is unnecessary and could severely damage the lake’s ecosystem. “As per the Wetland Act, we are not supposed to alter the physical integrity of the lake, widening the road amounts to altering the physical integrity and naturally the size of the lake will shrink. Already on the other side of Varthur lake, they have constructed pipelines to carry water to Kolar, they have filled the side to build a 100 ft. wide road, saying that it’s temporary. They have already damaged the lake, if there is any more damage it will create havoc in the system.”

Alternative solutions to the traffic problem would be to regulate the traffic and use alternate paths in the city leading to the area, planning properly he said would save public money which would otherwise be wasted on the road. He believes that people and the government should also look at other modes of transport like the metro.

He insists that Bengaluru can’t afford to lose more lakes or vegetation. This will only happen if the bureaucracy changes its mindset. In order to save the lake. The government should constitute a committee of unbiased experts to work on the matter, and in 24 months the lakes would come back into shape, provided the government cooperates and implements the suggestions, says Dr Ramachandra.

While many seem unsure about what the road-widening project will mean for the lake and for the people living in the area, one has to weigh the odds. Some still feel that the traffic woes are perhaps a more immediate problem to resolve than the pollution of the lake because the latter is a significantly harder problem to solve. A few have given up on the lake as a lost cause. There are others who believe that it’s the people’s attitude and their inclination which will save the lake. The government meanwhile remains mum. And the issue of road-widening around the Varthur lake remains as murky as the lake itself.

Differences over the proposed Tagore circle underpass has led to the BBMP’s technical advisory committee to take matters into its own hands. The body will now oversee approval for all major road projects in Bengaluru.

Enjoy cuisine from Italy to Mongolia in Eurasia, a pure vegetarian restaurant.

Catch up on news from the past week, in our weekly roundup.