Ever so often, somebody makes the statement – that we need to have a right to water. You can substitute water with education, food, health or any other resource-dependent ‘right’ — the arguments are quite similar: that not enough people have sufficient access to it, that the lack of availability of the right was a fundamental human indignity, that it was likely against the fundamental right to life guaranteed by the constitution, and that it was high time the state did something about it.

For better or worse, this has now resulted in Right to Education legislation, and will likely result in the same for food in the very near future if and when the Food Security Ordinance becomes Food Security Law.  The underlying principle here is that the legislation ensures that the access to education, food or water becomes a legally enforceable right, thereby providing impetus to the executive and the elected government at large to work seriously towards universal provision of the same.

Make no mistake, universal access to essential goods and services – food, education, water, electricity, connectivity and others is vital. They should be a priority for the Indian society and for public policy at various levels. However, especially while working on goods and services so important – it helps to be as realistic as possible. The question that needs asking is, does the creation of a legally enforceable right to water improve its provision? And if it can, will there be any unintended consequences because of the same? 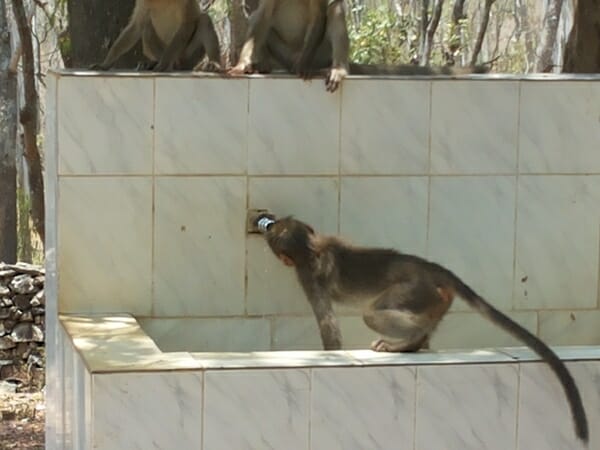 Will ensuring right to water for all increase the availability of water?  Pic: Shree D N

Let us try to answer those two questions for water in Bangalore. First, the resources. Much of Bangalore gets its water supply from the Cauvery river, and pumped from about 90 kms from the city and 500 metres below it. There is a cap on how much water the city can take from the river, and there is the additional constraint of heavy costs to pumping the water up to the city. These remain the same, right or no right.

The other source of water in the city is groundwater – either from within the city or from its surroundings. We consume this groundwater either from private or personal borewells, municipal borewells or from tankers. This groundwater is both being quickly depleted and pervasively polluted. Preventing this requires a host of concerted measures: solving the sanitation and storm water challenges to prevent pollution; understanding hydro-geology well and recharging the aquifers through identified recharge areas.

Second, the administration. While the Bruhat Bangalore Mahanagara Palike has the city’s elected representatives, the Bangalore Water Supply and Sewerage Board is a parastatal body entrusted with the provision of water and sanitation. Except, its coverage area does not fully overlap with Bangalore city municipal area, nor does it include the various urban outgrowths. On lakes and groundwater, the responsibilities are split between the municipality, a lake development authority, and a nascent groundwater authority. Addressing this needs serious administrative reform and requires genuine political accountability.

Third, the supply and the usage. Decrepit infrastructure means that 40 or more percentage of water distributed across the city leaks out of the pipes and does not reach the residents. It also means that the sewerage network is overburdened and breaks down on a regular basis in several places and is permanently damaged in several others.

Fixing all of this requires a lot of public investment, and the state budget can only spare so much, and there are limits to borrowing from international banks and other sources. This is happening while we massively subsidise even the most profligate of water users in the city. I had earlier estimated that the average Bangalorean household consuming the urban norm for water supply might be receiving about 9,500 rupees per year!

This is without counting how sanitation and sewerage are also heavily subsidised – though we are paying for it with our health. It is spurious to complain about wasted scarce resources when people have little incentive to do otherwise. While calling for stricter ‘regulation’ or for better ‘enforcement’ of rainwater harvesting – the crucial public debate we are missing out on is the economic cost pricing of scarce resources.

It remains unethical somehow to talk about how we must pay for the resources we use. If we are asking the taxpayer to do so instead, it effectively means that conscious, sparing consumers of water are subsidising their profligate neighbours. Is that equitable? Will that ensure that more water is saved and hence can be used to include more residents into the network?

Will a legally enforceable right to water improve its provision in the city? Maybe a little, at the margin – in those few cases where accountability can be pinned to someone.

However, will the move for a right to water come with huge opportunity costs? Almost certainly. Each of the challenges listed above require significant expenditure of political capital, it needs able leadership that can inspire sufficient trust in the city’s residents to walk them through the myriad challenges. Now, the right may come backed with union and state funding for adequate water provision, but again, the latter provision may be better achieved by forgoing the right and focusing instead on the attendant reforms.

Thanks to India’s overburdened courts, we have lost the right to justice, while pursuing the right to education, food, water and more. No system can work if more than even 10 percent of the people have to approach the court for redressal. Rights are relevant when defaults are rare, possibly malicious and are within the capacity of the judicial system to enforce.  Water supply provision hardly meets this criterion.

Spending public time and political capital instead on a feel-good right instead of genuine effort at reforms is counterproductive. While pursuing the right to water, the chance at its universal provision may be lost.

This is the time to extract promises from politicians, and Bengaluru runners aren’t behind in the race. They demand promises of better open, green spaces from the contestants of Karnataka Legislative Assembly Elections 2018.

A health crisis in the making

Is the water you drink safe enough?

Deepavali in the city: can it be safer and ecofriendly?

Why cannot Deepavali be a peaceful affair? Is anything being done to create awareness among children on harmful effects of crackers? asks Abhisheka Krishnagopal.