The previous three stories in the Right to Education Act series revealed loopholes in the implementation of 25 per cent reservation under RTE – how the schools try to circumvent rules and parents fight to get free education to their wards. The last story in the four-part series reflects what the private unaided schools think about the 25 per cent reservation, and what are the challenges they face in the process. 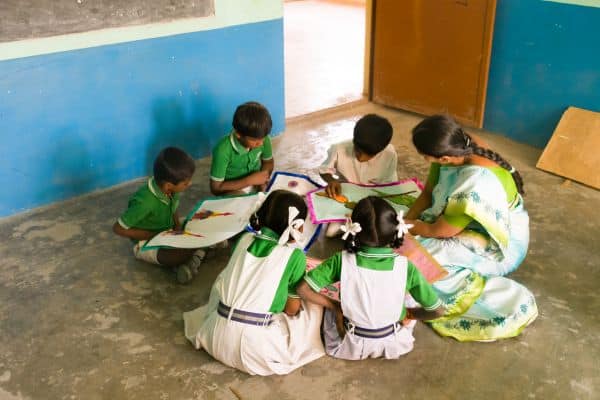 In one of the popular private unaided schools in Bengaluru, a software engineer whose monthly income is above Rs 1 lakh gets a free seat for his child under the 25 per cent reservation of Right to Education Act. The man dupes the Education Department and the school by showing his false document which says his monthly income is Rs 1,500.

In contrary, his house rent as per the agreement is Rs 3,000 – which is double his projected income. The RTE Act mandates the annual income of the beneficiary parent to be less than Rs 3 lakh.

The school management was convinced of this being a fake case, hence they independently did background verification of the applicant. Soon they found out that the person was an engineer who had submitted false documents to get free education for his child for next 12 years. The school management approached the Education Department with all documents to prove that the applicant was not genuine, hence the child should not be given the seat.

“I went to the Education Department and requested the officer to cancel the seat. I told him, if they fail to do so, I can create an issue out of it and go public. The officer first said they cannot help because the parent has got income certificate from the Tahsildar. And then the officer warned: if you speak about it, it will be portrayed as the failure of Education Department and the Department will come after you. That was a catch 22 situation,” says the founder of a chain of schools, who wishes to remain anonymous.

Lot of private aided schools in the city that abide by RTE Act share similar concern. From what we gathered while talking to various private school managements and associations for this story, they all feel the 25 per cent reservation is not reaching the intended beneficiaries. Seeing the deserving children fail to get RTE seats in their schools, while students from affluent families get free education, is demotivating, the school managements say.

When we asked several school managements about the percentage of genuine v/s fake entries, they all gave different statistics. A Principal of a private CBSE school said of the 25 students admitted under RTE in her school, the number of deserving children is as low as five. The founder of the chain of schools mentioned above said it is 50:50 in his schools. Shashi Kumar, General Secretary of Karnataka Private Schools Managements Association says 70-80 of the income certificates submitted by parents are false. “They (parents) show their annual income as Rs 20,000 to Rs 30,000. Is it even believable?” he asks.

Dr M Srinivasan, founder of Gear International School and the President of Managements of Independent CBSE Schools Association says most of the parents whose kids have got RTE seats arrive in posh cars to submit applications.

“They don’t respect the schools and the purpose of RTE. When we say poor, they should be really poor. There is no point in offering free education to a person who owns 2-3 buildings and whose telephone bill is Rs 2,000 per month. Forget fake certificates, how do you consider a person who earns Rs 3 lakh per annum and pays income tax as poor? The Act would have made sense if the reservation was meant for kids from BPL families only,” he points.

GEAR International School is a minority school, exempted from RTE. Refusing to budge to excess interference of the Education Department in implementing RTE, Dr Srinivasan says he has decided to offer free education for deserving kids in his school from next academic year but not the way RTE Act prescribes. “I will identify the deserving children and make a separate section for them and will implement RTE in my own way,” he says.

Principal of a private CBSE school reiterates that the first issue with the RTE 25 per cent reservation is the children who are admitted are not the children in need. “As soon as I see the child I am able to make out if the child is in need and or not. Schools can do the background verification of the parents easily and sometimes we do. It so happens that the person who has got seat for his child is from the Education Department or relative of Panchayat president or the one with clout. They (parents) even proudly claim to have paid the BEOs to get the seats. We have no idea how the online lot picking takes place. The process is not transparent,” she says.

When asked why not raise voice against such admissions, she says: “We cannot question them. The moment you question, the Department officials visit your school and impose heavy penalty even for smallest of things like the bus driver not wearing the uniform, the school not having ramp etc.”

Another factor raised by CBSE/ICSE schools is the challenges they face in training the RTE children.

Since the RTE Act emphasises on inclusive education, there is no provision to train the RTE kids separately. One of the CBSE school’s Principal says the RTE children often face culture shock in the school. “Starting from language, communication, clothing, health, hygiene, we need to teach them from scratch. They find it psychologically difficult to fit into the school atmosphere where you see all other children come from a different socio-economic strata. We do our best to train them even after class hours, but often end up thinking are we doing justice to these kids?” she tells.

When this reporter asked what she would do if given a choice, she said she would first choose a homogenous group of children by making sure that they all are from the same socio-economic strata and are genuinely in need of help. “I can arrange for separate classes and teachers (who can teach them in the language that they know) at least during first 2-3 years, use a different learning approach, design a separate curriculum that will even include what they missed in nursery education. This will help them get a sense of what we teach and by the time they reach 2nd or 3rd grade, they are ready to match with the learning of other kids,” the Principal says.

For schools, identifying genuine beneficiaries is one set of the problem. Claiming reimbursement for admitted RTE students is another challenge. Till this academic year, the Karnataka government had fixed reimbursement fee of Rs 5,294 (per student) for LKG and Rs 11,848 for 1st grade students. The amount has been revised for the first time this year – Rs 8,000 and Rs 16,000 for LKG and 1st grade, respectively.

However, the schools say that claiming the reimbursement is a pain. It’s a long and time consuming process and often the fee is not reimbursed at all or there is an inordinate delay in reimbursement.

Shashi Kumar from Karnataka Private Schools Managements Association says the Education Department does its best to avoid making full reimbursement, specially to state board schools. “The calculation per child expenditure is made based on our audit report. Now if the number of teachers in a school exceeds the students-teachers ratio fixed by the government, they (Education Department) ask us why do you need those extra teachers and they calculate the expense by omitting the additional teachers. They do not include several additional expenses that are incurred by the schools and do not give full reimbursement,” he says.

C A Ramesh, founder of Suma Public School too echoes his sentiments. He says most of the schools except the elite international schools, do not get full reimbursement even against the submission of all documents and expenses. “To match the reimbursement fee (prescribed fee), the school’s annual turnover should be Rs 50 lakh. The schools cannot ask for second instalment amount, if the first instalment is not approved,” he explains.

Adding to his statement, Jagadish, founder of Godwin Public School says the government does not reimburse the amount if the child remains absent from the class even for a month. “Reimbursement is not made if the child does not have minimum 60 per cent of attendance. A school is supposed to get the first installment in September, but we have not got the amount yet,” he informs.

Online reimbursements to ease the burden

A founder of a chain of schools says there are instances of schools having not got the reimbursement even for two years. So far, the BEOs would issue the cheque in school’s name for reimbursement. There were times when name of the school was misspelt in the cheque.

“We resend the cheque and it would take another two months to get a new cheque. I often feel they do it deliberately, because they expect a cut in the reimbursement amount. However, this year with the government deciding to make online payment to schools, the issue of BEOs playing around with cheques would stop,” he says.

A management staff from one such schools says that the Education Department insists the schools to follow the State’s Continuous and Comprehensive Evaluation system which is practically not possible as the school follows its own system of evaluation. Schools can not follow the state board to claim reimbursement, right? the staff asks.

Technical issues with the online application process for claiming reimbursement too is a matter of concern to schools. The Principal of a CBSE school says that half the time the Education Department’s website does not work. “It takes two hours to upload the documents of one child. The Department gives short deadlines. Due to this, often our clerical staff end up working from 12 am to 3 am. All this needs to be fixed,” the Principal says.

With many problems in the implementation of RTE and the Education Department declining to fix or even acknowledge the issues and passing the buck, will this education policy meant to help the deprived children, be one of a success, is a question that awaits an answer.

Graduates are difficult to influence with money and liquor, says one BJP campaigner flatly about the race for Bengaluru’s MLC seat. The Lok Satta candidate meanwhile is targeting precisely the reform seekers amongst the elite.