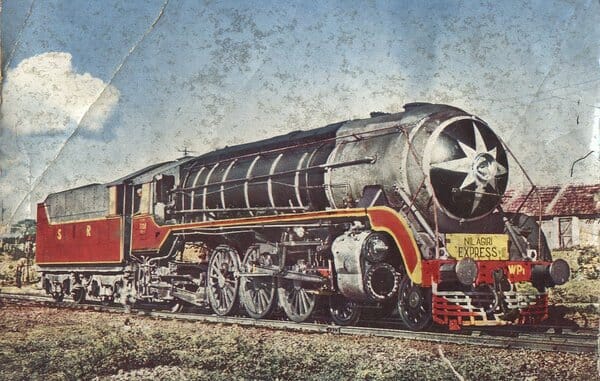 It was a sunny Sunday morning in 1966. My uncle, Gurunath, had been fascinated by trains for long before that, I guess. Sunday mornings were our outing times. This Sunday, he took me to the Bangalore City railway station. Platform 1 of those days was what is now Platform 7. The current ‘backside gate’, as auto drivers refer to it, was the main entrance. Construction of the current Platform 1 was in its early stages.

We sat on a bench on the platform, watching the WP steam engines moving about. And the lesser engines that were just used for shunting coaches and wagons around, and for hauling passenger trains, were doing their busy-work.

One WP reversed up on the track of PF1 and stopped just in front of us. At that age and stage of my life, I was puny. And this behemoth iron horse, hissing in various ways, occasionally sneezing, was quite impressive. It stretched to the high heavens. The wheels alone were like vāmana’s feet that measured the entire world with one step!

We got up and approached the monster. The heat it radiated! Then, a sudden whistle. I nearly jumped out of my skin. A little tittering and an indulgent smile from my uncle, and then we looked up into the cabin. I couldn’t see much because I was, well, not to put too fine a point upon it, quite short.

As we looked in, the engine driver walked over to the ‘door’ (actually no doors, only an entrance) on our side, looked down, smiled and beckoned us into the engine. I say ‘beckoned’ lightly, airily. I couldn’t even reach the handle-bars to grasp and hoist myself up. Uncle lifted me up and the driver hoisted me in.

The driver showed me the different parts of the engine and told me in a language that I vaguely understood what the parts did. The throttle, the speedometer, the tender (rear part of the engine that held the water tank and the coal), the whistle cord, and of course, the fire-box. He opened it for me to see inside. Yikes!! There was an almighty inferno in there. His two assistants – fireman 1 and fireman 2 – stood around doing their thing and occasionally smiling at me as I looked around totally gobsmacked.

Then, a toot of the shrill whistle. The lifting of the throttle bar, and the behemoth gently eased forward. Uncle held my hand and I held on to the doorway handlebar for dear life as we rumbled, swaying this way and that gently, moved a few hundred meters towards the Cantonment station. We then stopped, and the engine reversed. On to another track! Wow!

Then, waiting for I-don’t-know-what, we fell into conversation. Well, I say ‘we’, but it was mainly uncle and the driver talking. I learned his name: George Jeremiah (GJ), to be politely referred to as Uncle Jeremiah – my first Uncle <insert name here> form of address.

Thus was born a life-long, abiding romance of trains and train travel.

GJ, I learned, lived in a place called Arakkonam (in the Anglo-Indian-speak of GJ and his colleagues, it was Ah-konam).

GJ later introduced us to Lionel G Pacheco (‘Uncle Lionel’), then the senior-most engine driver in the Southern Railways, who also lived in Ah-konam. More on Uncle Lionel and our friendship another time. For now, let us stay focused on GJ.

We learned later (from Uncle Lionel) that GJ was a highly-regarded driver in the Southern Railways and had won several awards for saving fuel.

Every weekend, Saturday or Sunday, when GJ’s ‘link’ (railway-speak of the time indicating the crew’s schedule) brought GJ to Bangalore, we would ride with him in the WP. Crew were typically stationed in dormitories across the street from the Cantonment railway station (BNC), in a huge crater (I was very small, remember?), where several barracks kind of buildings existed for this purpose.

Often, GJ would drive the Island Express (I think it used to be called the 26-up) from Bangalore City (SBC) to Jolarapettai Junction. The engine sheds and a turn-table were at BNC. A full six to seven hours prior to its run, the fire would be lit and the water heated to produce enough steam pressure for the task. So, the WP would sit around hissing and coughing and looking… well, all behemoth-y. It would also be turned around to face the direction of the Island Express’s travel.

Uncle and I would go to BNC around 4.30 pm, meet GJ at the barracks and walk with him over to the WP in the shed. Around 5 pm or so, the engine would reverse from BNC to SBC. Most of the ride was downhill, so there was no need for much effort. We would ride in the engine to SBC. (Third class tickets were always bought, of course; for some unspecified train!)

We stayed on with GJ while the engine was brought to the waiting Island Express on PF1 and gently attached to the train. The delicate operation of moving this humongous iron thingie just that extra inch or two, to hook it up with the first bogie was an amazing feat to watch. The inching was encouraged by the joiner chappie with ‘rikaap, rikaap, rikaap’ until the moment it was just right and a loud “OHPPA” would ring out. The inching WP would stop instantly. The joiner would jump in between the engine and first bogie, heave the iron loop to the hook, twist the screw, and attach the ‘vacuum pipe’ that controlled the brakes for the train.

Then while the world swirled around with people shouting at each other, counting their pieces of luggage, chasing after overly-fleet-footed porters carrying their luggage, reading the reservation charts on every bogie (only the destinations were marked on the boards, none of the S1, S2 business that is so convenient now), and generally freaking out.

In the engine the crew would go about their work with methodical calm. Paper work to be completed. The ‘token’ (a metal ball with ‘SBC-BNC’ and other stuff engraved upon it, enclosed in a genuine leather pouch that was attached to a bamboo hoop) would be received, and an authorisation slip with details of the number of bogies, etc. written on it, would be signed.

While all this was going on, the HAL train would arrive on the far platform disgorging hundreds of employees of that august Public Sector Undertaking!

The non-WP engine of that train would be hooked to the rear of the Island Express to help push the train (while the WP pulled it) up the slope to BNC. This attachment was never a simple process and involved much pushing and shoving back and forth, a lot of whistling, shouting, and the WP huffing and hissing in protest of the goings-on. Because of all this, the Island Express never departed at its allotted 6.20pm.

The rear engine would be detached at BNC, and sent to the shed to rest and reflect on life. And do home work.

The Island Express with GJ and his crew would continue on to Jolarapettai Junction.

Trains for daily commute in and around Bengaluru!
Ammavra maga, Brindavan Express and the Kotamalli vendor

Transport is a problem that worsens with economic development. To tackle this, roads need to be decreased, not increased. How will an elevated way help?

How to manage waste in Panchayat limits: lessons from BIAL area

When Panchayats refuse to collect waste, it is an opportunity for multi-dwelling communities to manage their waste responsibly. That’ what this community did.

A resident of Electronic City, where one of the Waste-to-Energy plants is slated to come up, analyses why BBMP’s push for the plants is misguided