On October 31st 2015, a group of friends will be running from Freedom Park in Bengaluru to Chintamani, near Chikkaballapur. The following day, November 1st, they will make their way back to Bengaluru, once again on foot. Across the two days, they will cover a distance equivalent to that of seven half-marathons (a half-marathon marathon equals 21.097 kilometres). But this is no average run… it is an opportunity to raise funds to support the farmers in Chintamani. 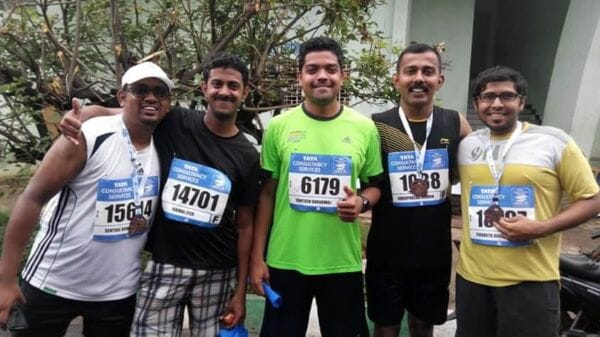 Some members of the team that will run during Ride2Light 2.0. Pic: Siddarth Dudheria

Citizen Matters spoke to Siddarth Dudheria, a product manager with a mobile payment startup, also the event architect for Ride2Light 2.0 to find out what it is all about.

At the kick-off of the previous edition of Ride2Light from Freedom Park. Pic: Siddarth Dudheria

Ride2Light is an informal collection of friends and well wishers, which began in 2014. Three of us planned a pan-India relay cycle ride from Bengaluru to Delhi for charity. Last year, from October 2nd to 19th, we covered a cumulative distance of 10,000 km. Two of the riders rode the entire stretch, while other riders joined in along the way. The ride took us through the Western Ghats in North Karnataka, the coast line along Goa, the highways of Gujarat and Rajasthan, and finally to the finish point at Gateway of India.

We raised a total of 3.5 lakhs for various causes through the course of the campaign. This money that we raised went towards four causes—the construction of toilets in Musiri village in Tamil Nadu, Education of the Girl Child in Orissa, to raise awareness about cancer for YouWeCan Foundation and to fund a government school in Mittur.

What is different about the current edition of Ride2Light?

This year too, we are looking to raise funds for charity. However, instead of riding, we are running this time around. And though we are running, we are still calling our initiative Ride2Light 2.0.

On October 31st, we will be starting from Freedom Foundation and running up to Chintamani. The following day, we will be running once again from Chintamani to Bengaluru. We will cover the distance of 75 km (on-way) in stages of about 20 km each. By the time we return to Bengaluru, we will have covered a distance that is equivalent to seven half-marathons.

While we have about eight people who will be running, we don’t mind if more join in as well – the more the merrier, and it increases our chance of raising more funds. However, we will have to limit it to two to three runners per stage. If a person is not running at a particular time, it will mean that he/she is supporting those who are running at that time—driving the support vehicles, handing out refreshments, first aid etc.

[Author’s note: In case you are interested in running the distance along with the Ride2Light 2.0 team, you can let them know by filling this form: https://goo.gl/u7TjNn]

What are you raising funds for?

We are working with an NGO called Soil Foundation that works with the farmers in the Chintamani area, with a focus on bringing back traditional farming practices. The funds we raise this year will go towards the following:

Why have you picked these causes in particular?

The Dalit farmers in the area typically have their fields in low-lying areas. Because of the water run-off from the higher levels, there is a considerable amount of soil erosion that takes place. Building bunds at the edge of their fields would mean we can help reduce the soil erosion.

With respect to the solar lamps, there is a small village called Domallapalli near Chintamani which is home to about 30 families. While the village has electricity, it is available only for two to three hours in a day. So many of the children from these families are not able to study as much as they would like to.

While it would do great if we raise enough funds to support all of the causes we have listed out, in case we are not able to raise substantial funds, we will pick two or three of these causes where the funds will have maximum impact and channel the money to them.

How can people contribute?

We have set up a campaign page on Milaap, through which people can donate. We have set a goal of Rs 2 lakh for now and will keep the page up till the end of November. We’re also hoping to capitalise on the Midnight Marathon and raise some funds in the run-up to it.

Ride2Light 2.0 starts this Saturday. If you would like to make a difference in the lives of farmers in Chintamani, do consider joining Siddharth and his team for the run. You can also sign up as a volunteer to help out with the logistics. Finally, you can make a donation—funds raised will go towards the betterment of farmers in the area.

RTI success in the city

September 21, 2009 Centre for Advocacy and Research

A coalition of NGOs provide case studies of a couple of success stories, proving RTI’s benefits in Bengaluru.

As per an analysis, PM2.5 levels in Bengaluru reduced by an average of 28% during lockdown. In some localities, air quality even met WHO safe levels, perhaps for the first time in two decades.

An open letter to BDA: Construct subways, to avoid accidents

An alarm beep installed at every signal is just for 5 seconds, which is not enough for public to cross a long stretch of road.