In the first part of the interview, you saw Bengaluru City Police Commissioner Praveen Sood speaking about various issues related to traffic management in the city. In this second and last part of the interview, he makes elaborate comments about issues such as the most challenging type of crime that Bengaluru police face, the drug menace, of the conflicts between foreign nationals and local people and how prepared are police for the election year. 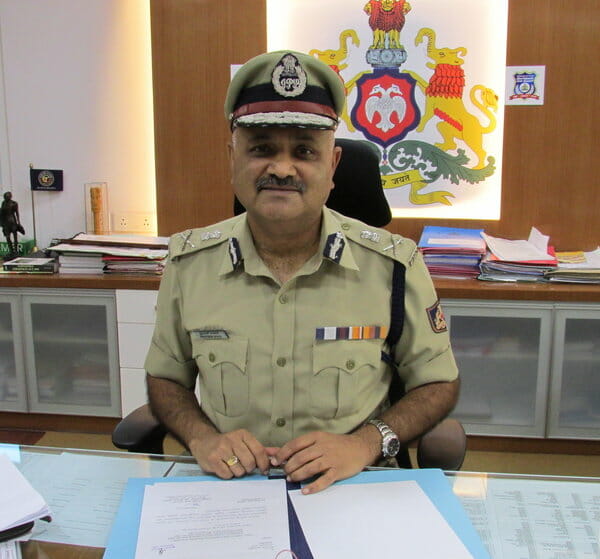 How is the nature of crime changing with changing times? What is the most challenging type of crime for Bengaluru police?

The most challenging type of crime in future will be cyber crime, where fraud worth crores of rupees can take place. That’s why we have recently opened a police station exclusively to handle cyber crime cases.

How is it functioning?

It is just 10 days old and has started functioning with 10 staff. The challenge is to get the staff trained as cyber crime is a complex issue and needs expertise. We have just started off. Huge amount of equipment and lot of training is required which has to happen in the days to come. Till recently there was no place to register cyber-related crimes in Bengaluru. Approaching a normal police station wasn’t really helpful, because the police neither had time nor expertise to handle cyber crimes. People can still register cyber crime complaint in a normal police station, but it will be transferred to the cyber crime police station.

Bengaluru police has recently announced of launching an emergency app for women in distress. How different is this from previous such apps? Have these kind of apps been proved of any benefit?

It is an app for anyone in distress, not just women. We call it an app for women, because we feel often women are in distress than men. Once you press the app or shake the phone five times, it gives the exact location of where the person is if the GPS is on, and immediately Hoysala will arrive at the place as the police will be monitoring the system. The android version was put to public domain a month back and it has been downloaded by 6,000 users. The app will be officially launched soon.

In the last one month, were there instances of women using this app to give a distress call and of them given help?

I don’t know because the control room gets complaints in six ways and it does not decipher whether the help is sought from phone call, dial 100, dial 100 app, Facebook, Twitter and the new SOS app.

How do you stop misuse of social media that may lead to disruption of law and order?

I cannot control [social media], because if I control no one will like it. In most of the cases the real identity of the person who appears on social media is not known and there is no mechanism to trace. Police will act only if there is a specific complaint. In social media-related cases, often the complainants retract their statement and police do not want to spend time on solving such cases. Let people impose self-regulation on the contents that they post on social media because they know the dangers of exposing on social network sites better.

This year is going to be an election year for the state. How prepared is Bengaluru police to maintain law and order if the city faces a violent situation, a protest or politically or communally charged incidents?

We are prepared. Thankfully the election mode is still slightly far away, but we are getting ready.

But the Supreme Court judgement on Cauvery river is scheduled for June. Considering what the city went through in last September, how prepared are you to tackle it?

We are fully prepared and we hope that such a situation does not arise again. We hope we will get a favourable judgement.

The Home Minister speaking at the Legislative Council admitted that drug abuse cases are rampant around educational institutions. How are you going to deal with drug abuse cases? What steps will you take to book them?

I would not like to comment on what the Home Minister said in the session. But if you ask me, yes I agree that drugs is a problem. Our statistics show that we have conducted huge raids on drug peddlers this year. Of the drug peddlers caught, almost 80 per cent are foreigners, those belonging to a particular continent.

You mean, those from African continent?

It’s all in the public domain. I don’t want to comment on it. Law applies to everyone, whether you are a citizen or a non-citizen. In fact, it applies more if you are an outsider and living here, because you are expected to follow the law of the land.

How challenging it is to handle foreigners booked for drug peddling compared to Indian citizens?

It is. Often the foreigners who are arrested for drug peddling take shelter under running court cases and continue to stay here. It goes in our disadvantage. Ideally, I would like to deport all of those caught in drug peddling back to their homeland. These laws are framed by the Central government and we have no control over it. There is no law to deport the foreigners immediately, if they are caught for an offence. They cannot be deported unless they are convicted or in case of overstay.

How have been the police handling their cases?

We send them behind bars. We try to expedite the trial.

What are you doing to curb drug menace especially in educational institutions?

One, is by creating awareness. Police are talking about drug-related issues during their visits to schools and colleges. Second, is to take quick action against distributors like small shop owners around educational institutions and third is to take action against big drug peddlers.

Where should a person who has the leads about drug peddling give the tip off?

They can tell the police. But I am aware that people are hesitant to give information to local police as they do not trust them. With lot of drug deals happening in virtual world, who has to pursue the case becomes a matter of concern. An ideal way would be to assign a third party with exclusive phone number to receive complaints about drug peddling and drug parties.

Students who come to Bengaluru from African countries have their own set of problems, like their documents retained by the institutions, they being harassed by locals etc. Has the city police ever sat with them and tried to solve their problems?

It should work both ways. First, they (students from African origin) should understand that when they are living in a different country, they should respect and follow the local laws and culture. There is such a gap between the cultures. Some of them, unknowingly or unintentionally may become nuisance to the local population. But they have to respect the sentiments of the local people. For a local person 9 pm may be the time to sleep and for a foriegner life may start after 9 pm. They at times make loud noise and disturb the atmosphere. It’s a serious issue. When I go to London, I follow their rules and custom. When they visit India, it is better to abide by our culture to avoid a tussle. I would say, be considerate to our cultural issues. There should be mutual understanding…it’s a give and take policy.

So harassment happens in both ways. From them (foreigners) to the local population and vice versa. These are the matters of cultural issues beyond police intervention. But I would advise that be a Roman while in Rome. And I would also advise local people to treat foreigners with respect as they are our guests.

We have a law that says ‘presumed innocent until proven guilty’ – and for that reason the face of accused is covered with mask. But in most of the cases, we see Bengaluru police declaring the names and identities of people allegedly involved in crimes. It reverses the theory to ‘presumed guilty until proven innocent’ – isn’t this unfair? Do you agree with it?

We have stopped parading the accused. I have instructed my people not to parade the accused.

Don’t you reveal their identity at all?

We reveal their identity through photographs and names except in the cases where test identification parade has to be done like in cases of molestation and robbery. In other cases we release the photographs, because after all we have to shame some of them. People ask why do you hide the offenders.

We saw the case of the lingerie thief in Maharani college hostel recently. Experts say technically it’s just a mental status where the person wants to crossdress, and it is not a crime per se. The person didn’t steal anything to get monetary gains. But then he was charged with four different sections of IPC. What’s your take?

I agree with it, but will people accept if he is not arrested? A formal complaint was lodged, hence action was taken. He was put behind bars and was then released. It is just a case of perversion. He needs treatment. Let us not over-react.

What are the reforms required among police, according to you? And is the police department working towards that?

Yes, we need massive reforms. Police department has to keep growing. We have to change our old procedures, simplify our procedures and need to leverage on technology. And also police need to be people-friendly. The problems should be solved collectively with the help of public.

Police chief wants to optimise use of technology, improve control rooms
Don’t panic – these mobile apps can get you out of danger