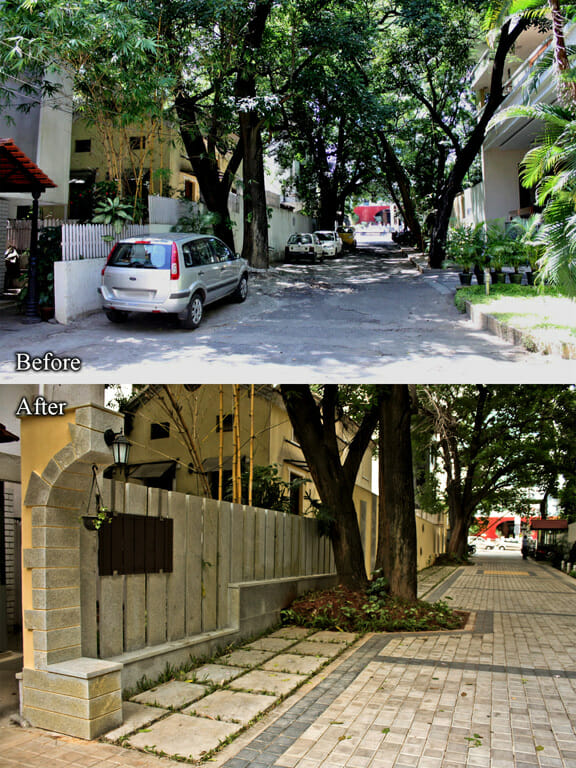 Museum Cross Road, a residential street at the heart of Bengaluru, used to be a road like many others in the neighbourhood. The maintenance was neglected. The old pavement was uneven, and tree roots were breaking through, cracking the pavement and creating bumps. It was an eyesore. Worse than that, it posed a danger to the residents. There weren’t even street lights to illuminate the road at night.

“When you’re coming home in the evening, and falling into a hole that’s almost a foot deep, and six and seven years later it happens again and again,” says Shivika Singh, a resident of the street, “you do decide something needs to be done.”

There was a need for the renovations, but the process was not free of challenges. At first, Singh said no one wanted to take charge, and residents were slow to get on board. The core group of four residents, including Rajesh Manglani, had to encourage others to become involved.

Manglani said people resisted, particularly because they did not want to contribute financially. The residents completely funded the renovations using their own financial resources.

Once people were more involved, some offered a suggestion to simply pave over the street with concrete. “We had a different vision,” Manglani says. “We wanted to create something that gave us a wow factor.”

Manglani said it was not easy. They had to get government permission, hire architects, come up with planning, and schedule the construction work so it didn’t inconvenience anyone or hinder traffic movement, among other difficulties. The road is technically a public road owned by the city, so they had to get BBMP approval, a process mired in bureaucracy. 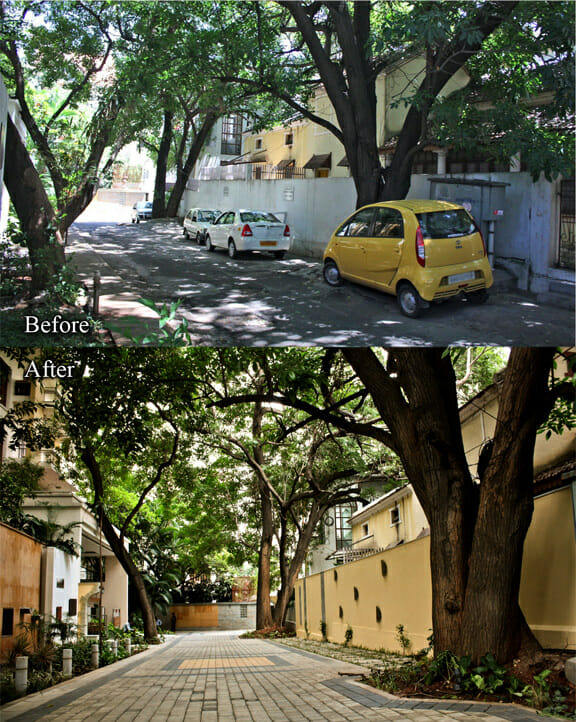 Arun Balan and Shehla Hussain work for the architecture firm, Balan and Nambian Architects, and were involved in planning the designs for the street renovation. They were brought on the projects after the residents decided needed to hire architects. Balan describes the project as an “urban intervention.”

Instead of pavement, they used concrete cobbles, which allow rainwater to soak into the ground according to Balan. Parking spaces were marked by square stones with leaf imprints, and arches with lanterns show where each doorway is.

The architects said they weren’t sure their model could be copied exactly, but more of these initiatives in small stretches of road could work, and could gain momentum if more of these projects happen. Balan stressed that it is possible for other projects like this to succeed.

“We can be hopeful that people can learn from this experience,” he said.

As far as government intervention goes, Balan said he doesn’t know what parameters need to be set for the government to take up initiatives to improve street design and other projects. But he said MG Road and Brigade Road used to look like Church Street with no pavements, and the government finally woke up to the need for renovation.

“It was a big thrill for us to just walk on a street where you weren’t going to trip and fall,” he said.

Unlike the planning process, the construction was completed quickly. It was finished within two or three months, a result of good planning according to Singh.

“I think there is a lot that can be done, but a single person cannot do it,” Manglani said. “If a community gets together, a lot can be achieved.”

Manglani said it is possible for citizens to take on similar projects, but it sadly might not happen. He said they need to be prepared to invest a lot of time, and deal with headaches.

“We stuck to what we wanted to do, and we achieved what you see,” Manglani said. “We feel it’s a huge project that we accomplished.”

Singh added, “Happy and proud, for sure.”

1) Residents commissioned a survey of the street. This was a simple but important step to make sure the road is properly renovated and does not interfere with existing structures.

2) Architects proposed a design based on conversations with residents. A dialogue between residents and architects was essential to ensure the project was built to their specification

3) BBMP sanctions the project. This was required, as the renovation had to be done within existing regulations.

4) Project planning and phasing: Strategies were chalked out to fit the unique situation. Construction had to allow mobility of residents.

6) Residents maintained the documentation of fees associated with the work for easy reference so others can see what has been done.

A meet on Madiwala lake development

Both Kuvempunagar Permanent Resident’s Welfare Association and Karnataka Forest department are planning to work together for the development of Madiwala lake. This and more updates from BTM Layout in the last fortnight.

Segregation at source became possible at Bellandur ward with the effort of a few committed individuals. When is this going to be replicated in your area?

Avoid these roads, on account of AAP Road Show on March 15

Don’t get stuck on these roads today!