Since the noon on Friday, Oct 21st, smoke continues to billow from the encroached land next to Bellandur lake, where an unofficial waste-sorting facility has mushroomed, where construction debris is dumped day in day out and where mixed waste from various apartments is dumped in broad daylight. It is clear that this has been created by burning rubber from construction debris, the plastic present in mixed waste and low-value dry waste from the waste sorting facility, in Bellandur ward 150, Kariyama Agara area.

What are BBMP officials, the police and fire departments, our elected officials and others doing? Are we entirely at the mercy of the rain gods to stop this misery, even if temporarily? 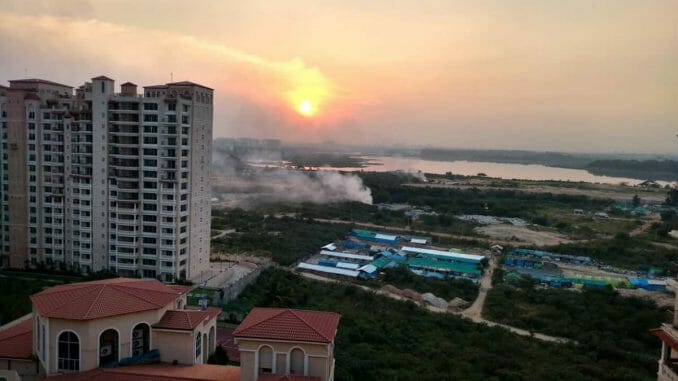 For three days now, residents in apartments around the site of this garbage fire have been struggling to make their woes heard. Pic courtesy: Seema Sharma

Several complaints have been raised in the past one year over this issue of burning waste, on BBMP Sahaya website, IchangeMyCity. While burning stopped for a while, dumping continued. While the dumping site was moved a few metres, burning would soon start again giving rise to a  thick smoke and fog. While we close our balcony doors and windows, children from rag-picking families run around in the open, near the source of smoke.

Complaints filed over the year

The issue of debris and mixed waste dumping, encroachment near Bellandur lake, garbage burning has been raised multiple times with officials. As an active volunteer, I have been working on awareness building and resolving issues over the past one year. Written complaints were given to the MLA on September 21st 2016 during a zonal grievance meeting, and three days later to the Health Inspector (HI) at a volunteer meet.

In our ward, we have a dedicated WhatsApp groups for citizens, officials and elected representatives to work on solid waste management (SWM) issues. On Friday Oct 21st, as the smoke thickened, we posted in these SWM groups with pictures, asking for help. The next morning, we called the HI to inspect, who in turn assigned an assistant to the issue.

Finally on Saturday Oct 22nd, we received a call from our zonal SE saying that they would inspect the area on Monday Oct 24th and that we need not raise the issue on WhatsApp group. We only needed to give them a call.

This of course meant that we would have to endure this smoke and burning outside our balconies for another 48 hours as there was no forecast of rain for next few days.

Will the Fire Department act?

Meanwhile, on Saturday morning, we also lodged a report at the fire station with a complaint of fire. The fire truck arrived in the morning around 10am that day and the smoke came down in some time. Our hopes were raised.

An hour later, however, the smoke thickened and another two spots nearby showed signs of a fresh fire outbreak. The fire station was called again on Saturday evening and it was a big relief to see the fire truck arrive at the spot from where smoke had covered the whole of Bellandur lake and all one could see was smoky fog.

The relief was short-lived as the the driver informed us that since there was no risk to life or property, and it was just a case of burning waste, they could not take any action. Besides, it would be difficult for their truck to reach the spot.

Meanwhile, early on Saturday morning (after 18 hours of non stop smoke and no action),  we called our new Health Inspector who has been working tirelessly over the past one month since he took charge. He assigned his assistants on the job. The assistant reached the spot around noon, followed by the Health Inspector. A few residents went and met them. They inspected the area and concluded that residents should file an FIR with the police against the land-owner as waste sorting on lake bed or private land is not legal!

Not legal? Really? The BBMP official website shows the list of Bellandur DWCCs [Dry Waste Collection Centre] near Bellandur Lake, Sarjapura Lake, and another at the Fire Station near Kaikondrahalli Lake.  Ward wise details of BBMP DWCCs hardly give the impression that it is illegal.

Moreover, DWCCs are mostly run by migrant workers on encroached land without any facilities or guidelines of proper waste disposal. A migrant colony is seen emerging on the private land and lake bed as these workers build huts daily – how is this being allowed? Is money is being exchanged for these permissions?

All this while, well into Day 2, we didn’t receive any response either from our corporator Asha Suresh or her husband, Suresh. We are reviewing options to go in a group to file another police complaint while the fire continues to burn, leaving thick smoke in the air for us to breathe. One complaint was filed months ago over the same issue with HAL police station.

Another option is to get private tankers to douse the fire, for while the fire is “not hurting any private property or life”, the smoke is. The situation only worsened on Sunday, October 23rd. The smoke started causing breathing issues, especially for kids with asthma, and even our poor pets were suffering. While we were able to reach the Health Inspector in the morning, we couldn’t contact him during the rest of the day.

However, we must acknowledge his sincere efforts as he instructed his workers to try to put out the fire as well as they could in the absence of fire truck water. A few buckets of mudwere thrown but it was not enough for the thick smoke and flames. The flames extended their grip to two trees. We watched, helplessly and without hope, as the trees burnt.

We called the fire station again, requesting them to save the trees suggesting that they try to reach the spot the same way the dumping trucks do. The fire station first tried to call the BBMP control room who redirected us to the SE. Finally they decided to send another fire truck that tried to pour water on the burning trees.

By the end of the third day, thick smoke has surrounded our community and a toxic smell leaves us all teary eyed. Kids with asthma are on nebulisers. During the day we tried using Twitter to reach out to authorities and media to raise the issue. Finally we got word from the corporator that they would be meeting with all officials the next morning to decide the next course of action. Meanwhile the lakeview communities would continue to lead their lives, engulfed by thick smoke.

While we are constantly advocating a pollution-free Diwali so that our elders, kids and pets don’t have to inhale hazardous smoke, here we are with the smoke in our backyard for more than three days; smoke created by dumping that is illegal in the first place. It must be reiterated that the fire is not accidental. The waste, accumulating for months now, even after several complaints of dumping, was intentionally set ablaze.

In February 2016, Bangalore Mirror had covered the issue of the burning near Bellandur lake but it appears that we are frozen in time in this area. Eight months later, residents grapple with another fire and non stop smoke for two days. What’s the solution? Where is it going to end?

Stop the fire. Stop the smoke and stop the garbage dumping please.

Whenever I  hear the legend that Nero was playing his lyre while Rome was burning, I always wonder… What were Nero’s subordinates doing? He must have had specific officials for specific departments. What were citizens doing? After all, Roman citizens were the ones getting impacted by the fire and smoke that was choking their lungs, making their kids sick in that terrible, continuous burning smell. Do we have any answers to that?

About Seema Sharma 3 Articles
Seema Sharma is a resident of Bellanduru and an active solid waste management volunteer.

The new National Education Policy has revived the debate on Kannada medium in primary classes. Catch up on news from the city this week, in our roundup.