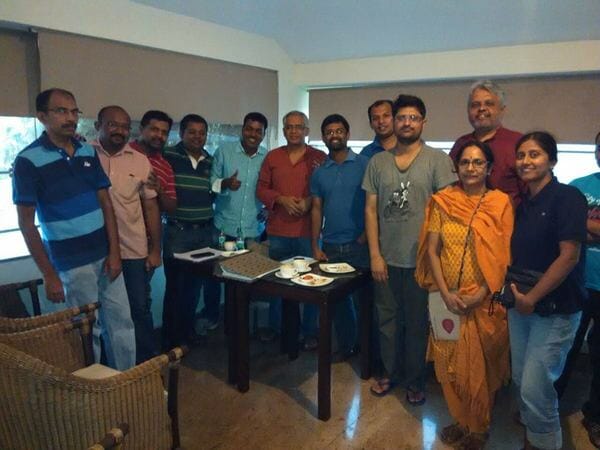 Two residents of posh homes in two Gram Panchayats in Whitefield area are gearing up to actively participate in the GP polls scheduled for June 2nd, 2015. This would not have been news, but for the notion that elite people living in gated communities pay least attention to local affairs.

With only ten days left for the polling day, two members of gated communities in Whitefield area have filed their nominations to contest the election from Seegehalli and Kannamangala gram panchayats in Whitefield. Sampath Ramanujam and Lingaraj Urs, who hold key positions in IT firms, are all excited to get into grassroots politics.

Living in Whitefield area where majority of population (almost 60 percent) reside in gated communities, the duo feel the necessity for gated communities to play a larger role in panchayats, which is mostly dominated by local villagers.

Representing the Bruhat Whitefield Residential Community Association (BWRCA) under the guidance of urban expert and founder of Nava Bharat political party R K Misra, Ramanujam and Urs have filed their nominations on May 21st and are looking forward to fight the election.

When Citizen Matters asked the reason behind their decision to contest the panchayat polls, Lingaraj Urs, Managing Director at Genisys Technologies, said that there is a tremendous gap in governance which needs to be filled. “Looking at the poor quality of infrastructure in the villages we often wonder where does our tax money go? Since Kannamangala GP has large number of apartments and villas that are regularly paying tax to the panchayat, we want to know how is it utilised, and we wish to channelise it in a proper way,” he says.

Another candidate Sampath Ramanujam, who has been active in public life since college days, considers it as an opportunity to get involved in the system and bring the necessary change that he would like to see in the panchayat. “I am hopeful that people support me as I have built a good rapport not only with gated community members, but also with the villagers.”

As he hails from Tamil Nadu, quite naturally, one would suspect his ability to converse with villagers for the lack of communication in Kannada. But, Sampath proves you wrong. Beaming with pride, he says: “I can fluently talk in Kannada since my wife is a Kannadiga, and I am the resident of Bengaluru since ten years.”

BWRCA, which has been actively participating in various community initiatives in and around Whitefield, decided to engage actively in the Gram Panchayat polls this time. Following the delimitation, three GPs come under BWRCA, including Seegehalli (3 villages), Kannamangala (2 villages) and Doddabanahalli. The total number of seats in Seegehalli is 13 and in Kannamangala is 11.

“Since a majority of the apartments and villas are located within Seegehalli and Kannamangala panchayat limits, we decided to get involved in election in these two panchayats,” says R K Misra, who spearheads the initiative. He is of the view that the involvement of gated communities in panchayat activities will help the panchayat members, villagers as well as the gated community members.

“Often panchayat members can not demand anything from officials due to lack of communication. Though we pay tax, many of our needs such as footpath, street light, effective waste management are not met. It is high time that priorities should be changed for the full-fledged development of a panchayat, and we are placing one step forward in this direction,” he states.

In fact, Seegehalli is considered as one of the richest panchayats due to huge collection of tax from large number of apartments. “We had conducted a tax collection drive in association with the Gram Panchayat two months ago and succeeded in collecting Rs 42 lakh tax in a day from a gated community,” he says.

To add feather to its cap, Seegehalli Gram Panchayat has won Rashtriya Gaurav Gram Sabha Puraskar for the year 2015 as a token of appreciation for its outstanding performance through effective Gram Sabhas, especially in respect of improvements in the social and economic structure of the village.

Voters to be asked to exercise their right

Venu Reddy, BWRCA member who is actively involved in the election process, said that apart from fielding candidates and campaigning for them, another task is to encourage residents of apartments/ gated communities to exercise their franchise in GP polls without a miss. “Though there is a willingness among the panchayat members and office-bearers to perform better, they certainly lack the much-needed expertise. We would like to share the expertise that we believe, will be beneficial for the development of the Panchayat,” he said while appreciating villagers for maintaining good coordination with gated communities.

Echoing his opinion, another BWRCA member Sanjay Kataria said that it is better to involve in the panchayat activities and understand the system, than merely sitting idle and complaining about problems.

However, they all do not forget to mention the support extended to their initiative by the villagers. “Villagers who have seen our activities towards betterment of the panchayat in the last few years, too have liked the idea of our participation in the election,” says Misra.

Ex-president of Seegehalli Gram Panchayat Suresh Babu’s words supports Misra’s views. “We have not treated the elite class members living in our villagers as outsiders, nor have they treated us so. They frequently visit the panchayat office, submit complaints, offer solutions, etc. In fact, they have helped us to collect donations to construct a three-storeyed government school building in the village. We welcome their entry into the foray of gram panchayat,” he said.

It is a matter of less than 15 days to know whether this different breed of candidates will make it to the panchayat.

BBMP has set up a ‘war room’ to prevent the spread of coronavirus and create awareness. The 24X7 war room will keep track of quarantined people, collect data, map affected areas, and so on.

Why are Bellandur citizens spending this Saturday morning in a human chain?

On Saturday, October 27th, the city will be witness to yet another human chain, organised this time by the disgruntled citizens of Bellandur, one of the largest wards of Bengaluru. Find out what their demands are.