When I was a kid, every so often, something in the house would go kaput, many a time, because my brother or I felt the need to meddle with it. Living in a remote area in the Nilgiris meant that we would have to wait to get it fixed till we travelled to town. My father would try disassembling and assembling to fix that VCR or whatever small item that was acting up.

The times have changed though. But in a changing environment, where people don’t have the time to go to a service centre or more often, find nobody to fix that mixie or old stove, we adopt the western philosophy of use and throw.

Well, the tide seems to be turning, at least at ‘Repair Cafe’. This November, India will become the 20th Repair Cafe country in the world and it’s happening right here in Namma Bengaluru.

What is ‘Repair Cafe’?

Repair Cafe has its origins in Amsterdam, when Martine Postma, organised the first event of its kind in October 2009. The event was an effort to encourage lay-people to try and fix their broken material possessions, instead of discarding them. 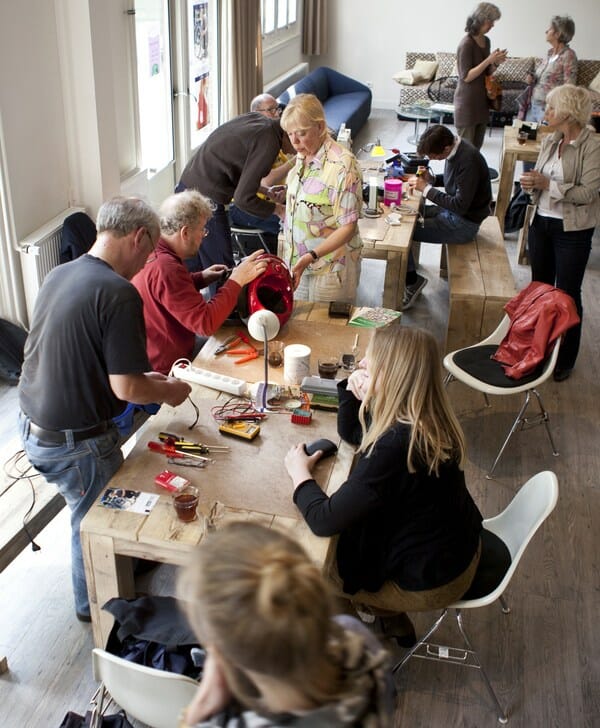 In 2011, Martine set up the Repair Cafe Foundation which support groups across the world who wish to organise a Repair Cafe. Today, Repair Cafes have been organised in different parts of the world; the Netherlands alone boasts of having over 150 groups that organise similar get togethers. 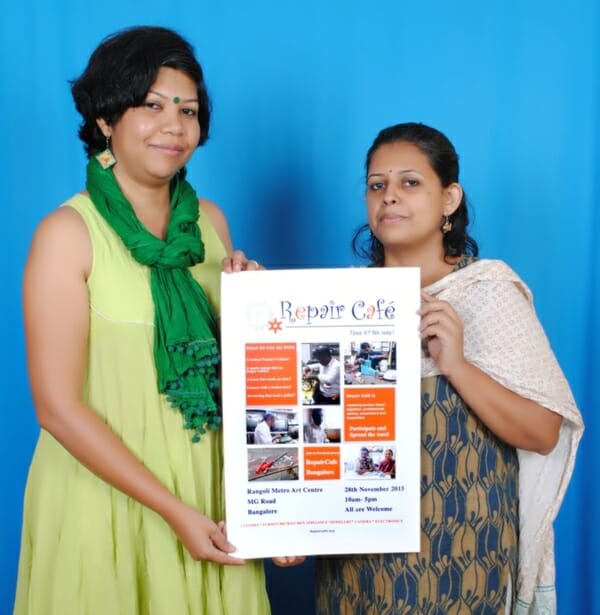 The Indian edition of Repair Cafe is being spearheaded by Antara Mukherji, a graphic designer and Purna Sarkar, an HR professional. The two met at a common friend’s house around September 2015 and got talking about a similar event in Bengaluru. They met several times after that to sound off the idea before they could convince themselves that it was the next, logical step. Purna says, “As home-makers, we like our stuff to be in good working condition, and this is a reflection of that.”

And now, on November 28th, Bengaluru will become the first city in India to host a Repair Cafe. The event will take place at the Rangoli Metro Art Centre on MG Road.

What can one expect from Repair Cafe?

Purna says, “Repair Cafe is a community event where like-minded people, with an interest in fixing stuff that is broken, can meet others and learn. We are trying to revive the culture of repairing things when they are broken, just as our parents used to do. Give things a second chance, if one can call it that.”

Saturday’s event will focus on the following items: cameras, kitchen appliances, clothes and bags, jewelry and small furniture. Six workstations that will be manned by repair specialists will be set up. People can walk in with their broken items and wait in queue to meet the relevant repair specialist. The repair specialist will inspect the item and repair it if possible (in the case of minor repairs like fixing a zip or a tear). If the item calls for a more elaborate repair, the repair specialists will guide them on what they need to do next – where they can go, or whom they can meet to get it fixed. What can possibly happen, especially in the case of minor repairs, is that people can possibly learn to fix it themselves.

A nominal entry free of Rs 50 is being charged. This entitles people to get their items repaired, help themselves to the free beverages and engage with other participants. In the interest of time and to accommodate as many people as possible, people have been requested to carry any one item that they need fixed. If time permits, they will be allowed to join the queue once again.

True to the its name, Purna says Repair Cafe will also have munchies on offer. They have invited home cooks who want others to sample their food to serve at the cafe. Tea and coffee will also be served.

Additionally, they have also tied up with e-waste specialists, Saahas, who will be setting up an e-waste collection centre. People can drop off old CDs or tapes, old cell phone and chargers, computer hardware, wires and cables, even broken electronic toys and gadgets. They will however not be collecting batteries or CFL bulbs.

Purna also mentions that they are trying to rope in a musician or two who can make music with recycled or upcycled material.

Repair Cafe could very well be the start of a trend where people become more conscious of what they can do to mitigate wastage, and in the process find creative solutions to do so. Here are some things that could happen if the movement gathers momentum.

Purna emphasises that for the movement to pick up, it is important that people do not bypass the traditional networks that have been around for decades, but instead include them. She cites the example of bicycle repair: “Many people own fancy, expensive bikes these days and are apprehensive about getting even a puncture repaired by the local chaps. They will take it only to a specialised store. If we can have a session, where both parties – the street specialists, as well as those in the fancy shops – can meet and interact, we could possibly see them exchanging knowledge and best practises. This would help those who don’t have the luxury of a formal education actually upgrade their skills, merely by learning from others.”

Post the first edition of Repair cafe, Antara and Purna hope that more such events pop up in localities across Bengaluru. Purna says, “We are looking to build a community of people who are interested in repair, and in turn, interested in helping other people out. Many people have the skills to fix things, but not many outside of their first circle know about it. Then, there are people who are interested, but don’t have the know-how.” Repair Cafe is probably a step forward in changing that.

They are also looking for venues for the future editions. If you can share your space or know of one that might be willing to host a forthcoming edition of Repair Cafe, drop them a mail at reachts@gmail.com.

If you have something to get repaired, do drop in to Repair Cafe. You may not only be able to get it fixed, but also learn to fix it yourself, and rediscover the joys of repairing. As Purna eloquently puts it, “There is a little bit of repair in all of us.”

How Bengalis are bonding in Bengaluru over Durga Pujo

Bengalis are adapting to the culture of Bengaluru’s eco-friendliness, by working on greener practices and themes. There are many places where Durga Pooja is being celebrated this year, and this article has the list.

Issues are my greatest opponents: B K Shivaram

In an email interview to Citizen Matters, B K Shivaram, brother of AICC General Secretary B K Hariprasad and ex-ACP for CCB, answers the questions. He is contesting from Malleshwaram as the Congress candidate.