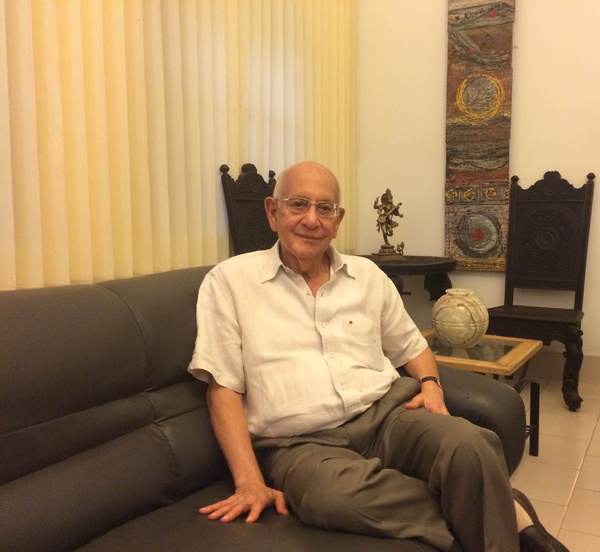 On 27th June 2016, Bengaluru lost one of its most eminent citizens when Indiranagar resident Xerxes Sapur Desai breathed his last in the city. He was at the helm of Titan Companies Ltd from the 1980s till his retirement in 2002 and is the man widely acknowledged to be the driving force behind catapulting the brand to international renown.

A man of great passion and energy, Desai is known for having transformed Titan into a nimble, agile organization and a very ‘happy’ place to work. He imbibed a culture which encouraged innovation, one of not following the beaten track, of doing things differently and better. One of his favourite sayings in Titan: “Today’s truism can be tomorrow’s heresy, and today’s heresy can be tomorrow’s truism.”

But while his stint at Titan is widely acclaimed, fewer people know about his social engagements and passion for urban issues in India. On loan from the Tata Group, he was part of the New Bombay Project in the early 1970s. He also served on the National Commission on Urbanisation constituted by Prime Minister Rajiv Gandhi in the early 80s.

Even in Defence Colony, the neighbourhood of Bengaluru where he resided, he always took an active interest in community issues. He was a wellwisher of Citizen Matters and a patron of our non-profit arm Oorvani Foundation. He told us, “What interests me is the very high quality of material published in Citizen Matters on the ills that beset the city and what is or could be done about them.”

Desai always espoused an organisational culture that was friendly, frank, open and non-hierarchical. And he lived these ideals in person. In the summer of 2014, Oorvani intern Christopher Lopaze from the University of Washington approached him for an interview published in our sister publication, India Together, he was his usual genial yet candid self and opened up on a vast range of issues, from leadership to Make in India to urban planning. Today as we remember him, we also recollect snippets from that conversation, his thoughts on urban development and Bengaluru in particular.

How has Bangalore, specifically, nurtured or hindered business interests?

I think the IT industry made a horrible mistake in developing a business campus without any residential facilities. There’s a business campus, I suppose some 30 km from where we are now, and everybody commuted from various parts of Bangalore. Did you come up 100 Ft Rd? In the 1980s, a car would pass by every minute or two (laughs). And now…

They got land cheap because of government encouragement of the IT industry. They were on very good ground in terms of the market. But it ended up in a mess.

Bangalore was supposed to be a Pensioner’s Paradise, a Garden City and it’s become a pensioner’s nightmare. Hell, not paradise. To say it’s not a Garden City, but a Garbage City, an unfortunate play of words (laughs).

Bangalore has changed dramatically. Until very recently, a year ago, I used to drive my own car because I enjoyed driving. Then because of some health problems, and with age catching up, I was persuaded to hire a driver. Then I started to notice, not just the road, but what was beside it. And it’s just amazing. Sometimes even in my own neighborhood, if I’m reading something in the car,  I look up and I see a building, and say “Where am I?” only to find that I’m on 100 Ft Road (laughs), where I’ve been for 15 years or longer, 20 years.

Throughout your life, you’ve been involved in urban planning projects. Have you continued to look into how problems facing urban spaces in India and developing cities like Bangalore may be solved? What did you learn from the New Bombay Project that could be applicable to Bangalore?

What set New Bombay apart was the fact that the government had set up a special government- owned company to undertake the development of New Bombay. We were doing the concept thinking, planning the design, construction, managing the kind of nodes we had set up, playing around with the municipal corporations. It was to a very large extent, hands off from the government, they were not interfering too much.

We had a really remarkable body of talent to conceptualize planning, engineering, all of it. We had a remarkable thing which I don’t see happening anywhere else in India since then. I think frankly that is the way to go. If public sector undertakings can manufacture steel, can’t they set up and run a city?

I think that is the main thing, that we had a corporation which had the freedom to hire the right kind of people. We had an extraordinary person as the managing director. He was a top civil servant. He went on to Delhi to head the Urban Development Ministry there, an outstanding guy. I learned a lot from him.

I was also put in charge of the development of the Bangalore complex for a while until they found a permanent person for the position. There was some issue, and the minister had to be convinced that this was the way to go. I made a list of all the logical reasons why things should be done a certain way and not any other. Then he kept on asking after each point I made, ‘So?’ I’d make another point, and he would repeat ‘So?’ even to very well thought out logical arguments. Finally, (it was about) What’s in it for him? (Laughs). That is really the bane of most of our cities today.

I find that our cities are in the hands of a bunch of people characterised by a lethal combination of three things: corruption, incompetence and wrong values. So, you begin to give up hope. How do you bring about transformation of our cities? You begin by transforming institutions. And if you can’t transform these institutions, you have to bypass them by setting up city development corporations.

It’s difficult to do for old cities, but the 100 new cities that Modi is talking about need just that. I hope he does just that. Give them the power and means to accomplish their objective, and provide oversight. Leave them to do their job and leave them to compete with each other.

Corporations need to be heard out. They should not be in a position to decide. Because the decision must be taken by professionals whose aim is really for the greatest happiness for the greatest number, isn’t it, not just a few who want to get to the airport faster, or things of that sort. More importantly, corporations need to make funds available to NGOs and other organizations which have think tanks and implementation skills. That’s really what they should be doing. They should decide from an industry point of view that this is what we need.

Money is scarce, so it needs to be looked after. It can’t be left for them to decide. Sure, they should have their say, and have the sagacity to make investments with the right kind of professional people. There is a significant number of organizations in the city, these are extremely talented people who have the right values, and not just wanting to build cities for the rich.

What is the biggest impediment in the way of figuring out how to solve many of the problems associated with a rapidly developing city like Bangalore (no proper sewage removal, lack of planned infrastructure, etc.,)?

The answer, to my mind, is that we have to make a dramatic change to the way our cities are managed and governed. I think the model is the New Bombay which was called the City Industrial Development Corporation of Maharashtra, or CIDCO, that’s the kind of model to follow. The problem with—and look at our corporators. They are really, some of them, most of them, scum. First of all, they are not equipped, mentally equipped, to find the right solutions to problems on the city scale. And b) the extent of their philanthropy is limited to their constituency. Most of them are there for what is in it for themselves. Let the representatives of the people do just that, represent the views of the people. Let them be the intermediaries in the marketplace as it were. People who say this is what people in my constituency think. But finally leave it to a class of professionals to decide what is in the best interests of the people. They should not have any executive powers, they should only play an advisory role. That is what we do in our corporations. We ask around, we do market research, to find out what the people want, or could be made to want. That is the bane.

And the politicians. We are going through a pretty awful period in Indian history. The easiest way to make money for a politician is to change either the floor space index or the zoning law. Literally by a stroke of a pen you can create enormous amount of wealth for developers or owners of land, and then you partake of that. You can find that, in fact, in most every state in India, it is the Chief Minister who handles urban affairs, or he has somebody who is very much his sidekick to handle urban affairs.

I think it’s really the politicians. Whether it’s the state government or the corporators, that’s where the problem lies. The way to go is really to professionalize the management of our cities and put them in the hands of corporations, following more or less the CIDCO and the New Bombay model. I’m sure lots of new cities in the world have followed this kind of model.

A resident of Byrasandra wonders how people on the road can turn a deaf ear to the noise pollution they cause.

This Japanese play has been performed across the world with different actors for the past two decades. It is a powerful play which makes the audience introspect.