Dhanya M, an HR Consultant, had stopped at Empire Restaurant in Frazer Town to pick up food. As she made her way through the crowd, a man ‘accidentally’ touched her breasts. When Dhanya questioned him, the man feigned ignorance. His friend too joined in to defend him, while the crowd merely stood by. The excuse the friend gave was this: “Please forgive him. He is drunk!” After a five minute argument, where sentences like, “Being drunk is no excuse to molest”, and “What if he did this to your sister?” were uttered, the two men apologised and left. Though Dhanya was shaken by what happened, she carried on, without considering the possibility of reporting the incident to the police.

While sexual violence and harassment against women is not uncommon, it often goes unreported. According to the National Family Health Survey 2005-2006, though 30% of women who experience sexual violence tell someone about it, only 1% of them actually proceed to report it (Source: Ready to Report). The reasons for this are many – societal stigma, being unaware of the process, reservations in approaching the police, fear of the judicial process. 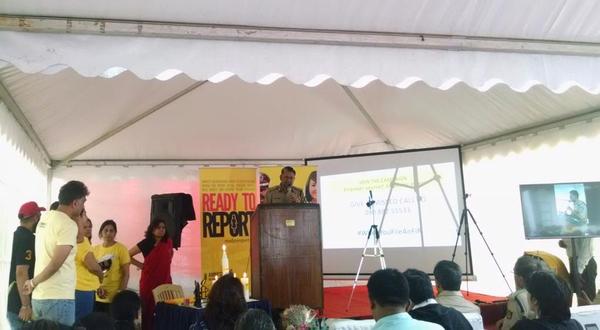 Commissioner MN Reddi addresses the gathering at the launch of the Ready to Report initiative at Ashok Nagar police station. Pic: Ganga Madappa

To enable and empower women to be able to report sexual violence and harassment with safety and dignity, the Bengaluru City Police (BCP) joined hands with Amnesty International India to launch the ‘Ready to Report’ campaign. Police Commissioner MN Reddi inaugurated the campaign at the Ashok Nagar police station in Bengaluru, on the morning of Saturday June 25th 2015.

Snapshots from the launch

Addressing the gathering at the launch, MN Reddi said, “We want to encourage women to report instances of sexual abuse or harassment to the police without any fear. The city police is geared up to act and will ensure that every FIR is registered and due process is followed.” He then proceeded to inaugurate a virtual kiosk where people could learn how to file an First Information Report (FIR). 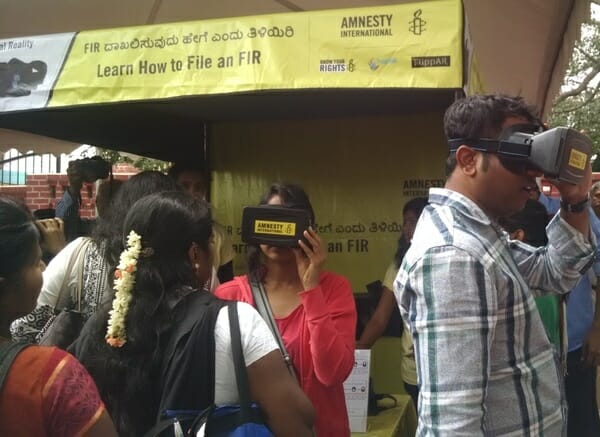 The kiosk offered a simulated experience of what it was like inside a police station. People could try on a headset that took them on a virtual tour of the police station and the steps to file an FIR in English and Kannada. This served to let people know that there was no reason for them to feel intimidated about approaching the police, and also made them aware about the reporting process. A member of Amnesty International said that the kiosk was moved to Mantri Mall in Malleswaram in the latter half of the day to bring about awareness.

A mural calling for women to report. Pic: Ganga Madappa

A mural based on the theme of women’s safety was painted on the wall of Ashok Nagar police station by artist Ullas Hydoor and others. The Commissioner, along with a few other senior officers too filled in small patches of the mural with spray paint canisters.

The Commissioner mentioned that BCP had hit the 1 million mark on social media with 5 lakh followers each on Facebook and Twitter. He added that they were also looking to start using Whatsapp, where citizens would be able to reach out to the police through the mobile messaging platform.

Police and citizens get ready to report

To start with, the Ready to Report initiative has been introduced in 10 police stations across Bengaluru – Yeshwantpur, Chickpet, Cubbon Park, Sadashiv Nagar, Ashok Nagar, Indira Nagar, Electronic City, Basavangudi, Whitefield and Koramangala. The police officers at these stations have taken a pledge to ensure that women feel safe and confident about reporting sexual violence or harassment. Going forward, each of these police stations will also conduct community events to inform citizens and build a relationship with the community. 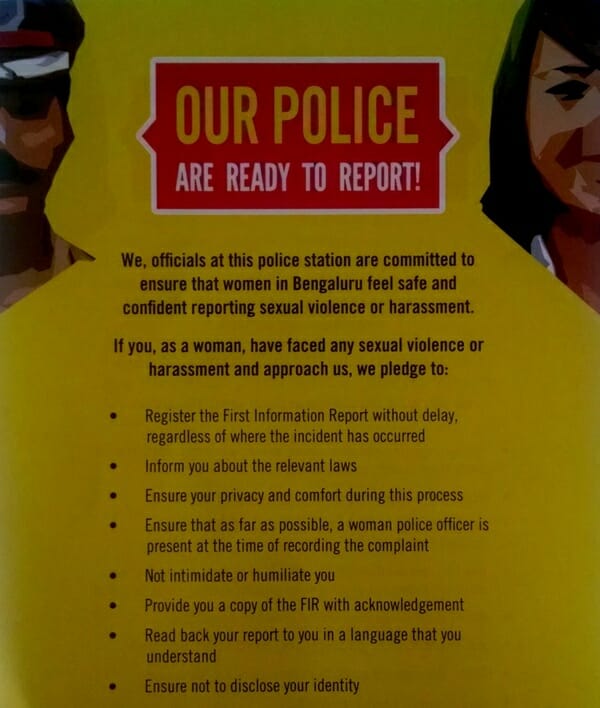 The pledge taken by the Bangalore City Police. Source: Amnesty

Gopika Bashi, an activist with Amnesty International said that the organisation was looking to extend the campaign to other police stations in Bengaluru, and eventually across the country. She added that they would be forming a Citizens Network, to enable others to report instances of sexual abuse. As next steps, Amnesty International would also engage with citizens by setting up virtual kiosks in select neighbourhoods and put up videos, to inform them about the process of filing an FIR.

Inviting citizens of Bengaluru to support the initiative, the Commissioner said, “We want you to be a part of the system. We are, after all, your police.”

‘Nirbhaya Karnataka’ for a state safe for women

Increasing number of incidents of attack on women reported in Bengaluru; ‘Nirbhaya Karnataka’ (Fearless Karnataka) collective formed to reclaim public spaces and promote safety for all.

SAHAI is a dedicated suicide helpline that you can call and hope to find a friendly, helpful voice that gives you hope, courage and strength. A conversation with Anita Gracias, a SAHAI volunteer.

The travails of city dwellers!

Time can come to a standstill but traffic will never be! Can anyone dare to contest (no nomination required!) this statement?