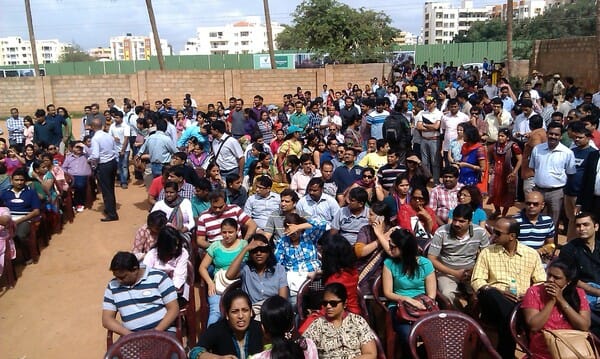 Sending a child to school just isn’t the same any more.

The latest incident that reinforces this unfortunate truth is what happened at the Marathahalli branch of Vibgyor High School, one of the more reputed private schools in the city, catering largely to educated upper middle class parents, many of them migrants to the city.

On 2 July, a child studying in the first grade was punished with ‘isolation’ in another room of the same school, during which two men, at least one among them reportedly being a teacher in the same school, allegedly sexually abused her. The traumatised child was unable to report the incident to her parents initially. It was only a few days later, when she complained of physical pain and was medically examined, that the incident came to light.

The parents of the child lodged an FIR with the police on 9 July in which they recorded that their daughter had been abused by an SPA (Sports and Performing Arts) teacher and another unidentified man. This was corroborated on Wednesday by T D Pawar, DCP South – East, who also shared that investigations were on, but no one had been arrested in the case yet.

On Wednesday, social media was abuzz as the news of the incident spread and parents across this part of the city united in their outrage against the school authorities. For one thing, they were deeply anguished that despite their queries about presence of police personnel on campus over the last few days, the school had constantly tried to mask the truth, ascribing police presence to some ‘transport issues.’

It was only after some dailies reported an instance of alleged rape in an ‘upmarket’ school near Tubarahalli / Kundanahalli that they probed further and eventually came to know the truth. While school authorities have still been ambiguous over the issue, the police confirmed the above facts related to the case before a large gathering of parents at the Vibgyor school on Wednesday.

‘School hid this incident from us’

When Citizen Matters visited the school, an angry mother present at the school told us, “The school sends us an sms for the smallest of issues. Even if the bus is late by 5 minutes, they inform us. Yet, they chose to keep us in the dark about such a big issue. When we called to ask why there were so many policemen on campus, they made up stories.” What added to their consternation was the fact that till Wednesday, neither the Principal nor the Director of the school had made a single statement explaining the lapse or what they were doing to prevent repetition.

The fact that many of the news reports, especially in English media, did not name the school – with some even suggesting that the incident occurred out of the school premises – has angered parents further. Many of them accuse the school of actually using their power to try and silence the media on this issue.

But while this incident has been the immediate trigger for the current expression of outrage and protest, the angst of parents and their complaints against the school have more deep-seated roots. Some parents say the same school that asked parents to sign an undertaking that absolves the school of any responsibility for what happens to a child during school hours. In fact, it even prohibits parents to gather in groups to raise any of their concerns.

Many more incidents in the past?

More shocking perhaps are the indications that this may not be the first such instance in the school. Several conversations on social media and even some parents that Citizen Matters spoke to pointed out that multiple cases related to molestation and physical abuse have been reported within the school premises over the recent past.

One such relates to the alleged molestation of a sixth grade student by the swimming teacher. In another case, a girl student was persistently photographed by an SPA teacher, whom many consider to be one of the accused in the present case involving the six-year-old.

The school has turned a deaf ear to all these allegations in the past, say parents, never acting on them, which may well have emboldened the culprits and culminated in this ghastly incident.

However, Citizen Matters has received no confirmation or correspondence relating to these incidents or evidence that the same people had been involved.

Outsourced ‘teachers’, not on school’s roll!

What makes matters legally messy is the fact that the two men named in the FIR may not belong to the rolls of Vibgyor High. Parents say this is because the instruction of SPA or co-curricular activities is outsourced by the School to external academies. Effectively, therefore, the accused are not Vibgyor staff and whether the school may be held culpable under the circumstances is something that is yet to be established with any degree of certainty.

But while the legal ramifications remain unclear in the immediate present, it does not preclude some very important questions that have arisen in the wake of this incident.

Can a school shirk all responsibility for custodial safety of children merely by getting parents to sign an agreement in concurrence? Incidentally, while Vibgyor has had this practice for a while now, several schools seem to be taking a leaf out of this. Even as the fury over the 2 July incident boiled over, another international school in the city, the Treamis World School in Electronic City issued a similar form for parents to sign.

The first clause in the form reads: “In consideration of my child’s participation in various events organised by the Treamis World School which may include field trips, excursions, expeditions, annual camps, sports events etc., I hereby release the management, officers, employees and agents of Treamis, its parent and sister concerns and any other people officially connected with the events, from any and all liability for damage to or loss of personal property, sickness or injury from whatever source, legal entanglements, loss of life or money, which might occur while my child is participating in the event.” (emphasis added)

Yet another critical question relates to the propriety of schools, which are essentially meant to own responsibility for all education imparted, in appointing external agencies and then claiming innocence and ignorance when there is a misconduct or lapse in responsibility by one or more agents of the contractee.

In Vibgyor’s case, of course, things go further as the school is also known to let out its premises and infrastructure, albeit out of school hours or during vacations, for external students. This, too, has led to unsavoury incidents in the past, most notably when a lady taking swimming lessons was molested in the pool by two men, as reported earlier by Bangalore Mirror.

But the overarching question that remains is of the processes followed, not just by the school in question, but schools in general. Shocking as it is, this is not the first time that Bangalore has awaken to an incident such as this.

There have been several reported incidents of attempted or real sexual harassment of children either within premises or in school transport. One of the most recent and prominent cases is that of a pre-school on Sarjapur Road, where a toddler was allegedly raped by the driver of the school  van after the teacher sent her out with the ayah as she was crying in class.

Who will be held responsible in this case? Whether it is the school, or the outsourced agency? Or the criminals themselves? Why are the names not revealed in this case? What are the rules to be followed by schools in such cases? With many such questions remaining unanswered, Citizen Matters will continue to track this story.

Also read: State asks ICSE board to cancel the license of the school

Never-ending rapes: What. Exactly. Is. Going. Wrong?
The rape debate – did it or did it not happen?
State asks ICSE board to cancel school’s licence: Second blow to Vibgyor parents
Are you supporting rape? Inadvertently?
‘Unfortunate incident,’ says Vibgyor High head

Schools galore and a lot of them are beginning to tote the ‘international’ tag, but how do parents decide which is the best? Bangalore’s first ever international school survey report is out September 15th.