It is a known fact that areas like Malleswaram and Basavanagudi play a significant role in shaping the city’s love for classical music. Other than Indian Heritage Academy in Koramangala and BTM Cultural Academy, there are very few places easily accessible to classical music fans living in South-East Bangalore. Ranjani Fine Arts (RFA), a non-profit charitable trust, has stepped in to bridge this gap.

‘Enable, Educate, Access,’ are quite possibly the words that define Ranjani Fine Arts’ raison d’etre. Ranjani Fine Arts (RFA) has for the past two years, been nurturing and developing the cultural landscape in the Sarjapur Road – Outer Ring Road area of Bengaluru, with a three-pronged approach.

Championing the cause of classical music

Run by a diverse and committed team of volunteers, ranging in age from the 20s to the 60s, RFA has grown in strength to presently include a 300 strong member body. Since its inception 2 years back, RFA has offered a delectable fare of music that can be compared to concerts at renowned sabhas. In 2013 alone, it hosted a multitude of events, including 10 monthly Carnatic music concerts, 6 Hindutani music baithaks, 2 LecDems (Art of listening to Classical Music by Vocalist Vidwan G Ravikiran, The logic and magic of Laya by world renowned percussionist Sangitha Kalanidhi Prof. Trichy Sankaran), and a workshop on Rare Kritis of Saint Tyagaraja by Vidushi Neela Ramgopal. For the youth, there were 10 monthly childrens’ programs that featured nine music schools as well as a ‘Meet the Artiste’ session.

RFA celebrates 2 unique “Utsavas”, or community festivals on an annual basis. Guru Utsava, held on the occasion of Guru Purnima in July/August, highlights the significance of the Guru in Indian culture, and showcases the performances of music teachers in the community. The 2013 edition featured 18 music teachers. The Vaggeyakara Utsava conducted in January, witnesses students of all ages, from various music schools, paying tribute to the great composers through the ages. In 2013, 23 music schools rendered compositions by 19 composers. These concerts witnessed a packed hall, and for several hours, united several hundred people – teachers, students and music lovers alike. RFA also encourages young and budding talent in its monthly programs;prior to every concert, there is a performance by the students of a music school.

It is evident that RFA has built a relationship based on trust and appreciation with the artists that is had so far liaised with. Here’s what a few of them have had to say.

“My heartfelt thanks for the warm hospitality and the wonderful audience. It was a pleasure as always to be part of an event at RFA! I look forward to keeping in touch with RFA – and wish you all the best as you continue to serve the cause of Carnatic Music with great aplomb!” – Vidwan G. Ravikiran

“I highly appreciate the efforts that you and your team have taken in arranging the concert at Ranjani Fine Arts. Everything was remarkable—a good audience, mike arrangements, and good accommodation..Thank you so much for your high involvement and support.” – Vidwan Sankaran Namboothiri

“I wholeheartedly congratulate RFA for their yeomen service in the field of Carnatic music…because a Sabha of this quality was required on the outskirts of Bangalore city…” – Vidwan H S Sudhindra, Mridangam

“Thank you, Ranjani Fine Arts. I am extremely happy with your team for your untiring efforts to make your association a leading one in Bangalore. My best wishes to you all” – Vidushi Neela Ramgopal

“They treat the artists with dignity and also take care to see that the visiting artists are comfortable.” – Vidwan D Balakrishna, Veena

RFA continues to delight its patrons in 2014 as well. Its annual music festival, Samyoga, is scheduled to happen on Feb 8,9, 15 & 16, 2014 with 2 concerts each in the Karnatic and Hindustani genres. Featuring highly acclaimed artists such as Sangeetha Kalanidhi Vidushi Sudha Raghunathan, Vidwans Malladi Brothers, Vidhushi Dr. Ashwini Bhide Deshpande, Pandit Kushal Das (Sitar) and several others, the festival is sure to be a treat for the ears.

Pictures from the annual music festival 2013 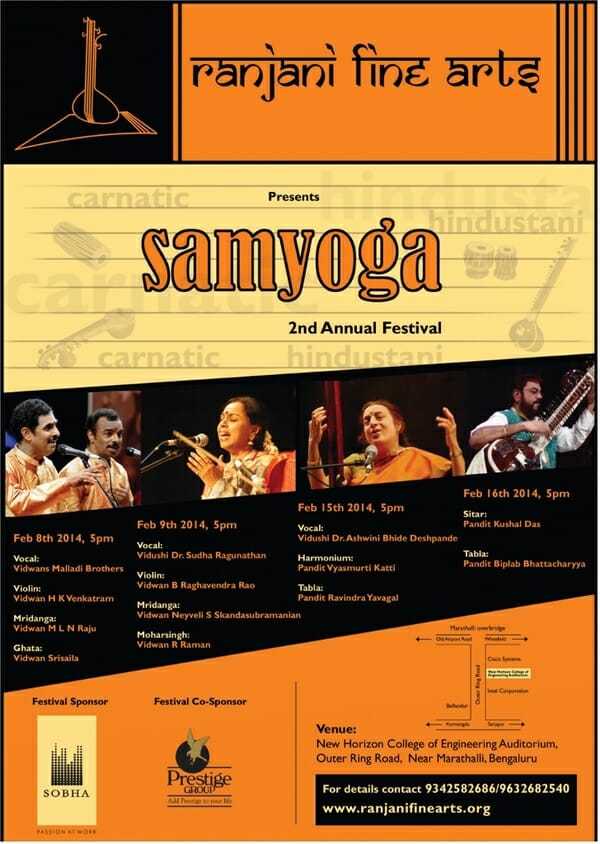 Most BBMP councillors will not be able to stand for election in their current ward under the new reservation rules. Here is the list of old, draft and new reservation categories.

RTE helpline: How to use it effectively?

Earlier there were a lot of children in government schools, but of late the number has reduced, as parents prefer private schools. However commercial nature of this has also created school drop outs.