Eco-friendly Ganesha festival has caught up in a big way this year, in Bengaluru. Dedicated teams of volunteers have been struggling day and night, along with the Bruhat Bengaluru Mahanagara Palike (BBMP) and Karnataka State Pollution Control Board (KSPCB), to put proper disposal systems in place, and to spread awareness among people. Making one’s own Ganesha using clay was the mantra for hundreds of citizens this year.

The result was obvious on the first day of the festival itself. According to Yatish Kumar K C, Additional Commissioner for BBMP West Zone, on the first daym there were 1350 clay Ganesha idols immrsed, as opposed to 400 PoP idols. Many other areas where volunteers were active reported similar trends where maximum Ganesha idols were made up of clay.

N S Ramakanth, a member of Solid Waste Management Round Table (SWMRT), who is one of the veteran eco-warriors of Bengaluru, says that out of the 1,27,000 Ganeshas immersed in Sankey Tank last year, 62,000 were clay Ganeshas, the rest, about 65,000, were made up of Plaster of Paris (PoP).

PoP idols never dissolve in water – it’s only metals that are in the idol that get dissolved, thereby polluting lake water. BBMP has made many arrangements and specific immersion points for the ecofriendly disposal of idols. Here’s the list for all eight zones of BBMP. Click on it to enlarge the image. 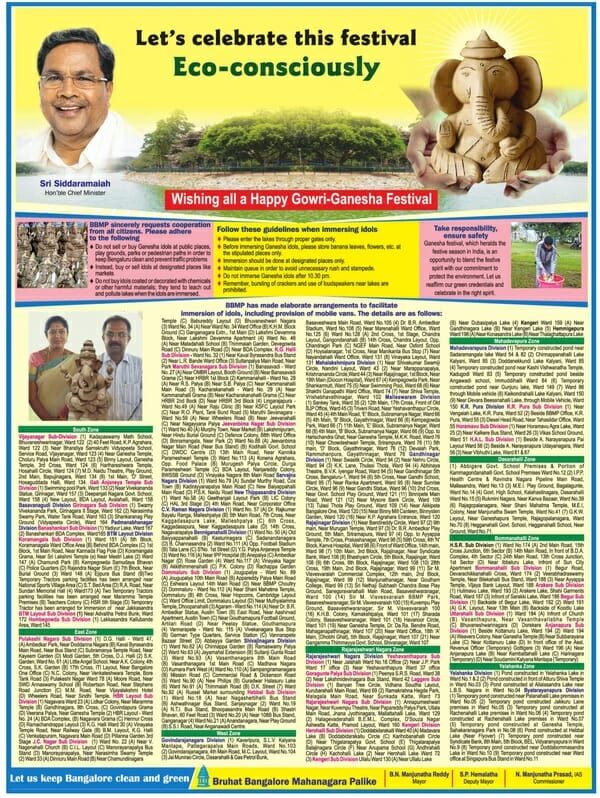 List of eco-friendly Ganesha immersion points in Bengaluru, released as an advertisement.

Unlike old days, there is better cordination among the BBMP these days, due to the advent of new age social media tools. Volunteers and BBMP officials have joined hands together and formed a WhatsApp group for festival waste management, which discusses and devises strategies to deal with all kinds of waste during all festivals, in every season, through the year.

During this Gowri-Ganesha festival, the group was very active, with volunteers and officials sharing information, directions and motivation in the group, and driving change in the waste management of the city during the festival. There was maximum promotion on social media for the cause, with awareness messages by everyone including the Chief Minister of the state. There have been many guidelines for the public by the BBMP on how to dispose of the idols and other waste. 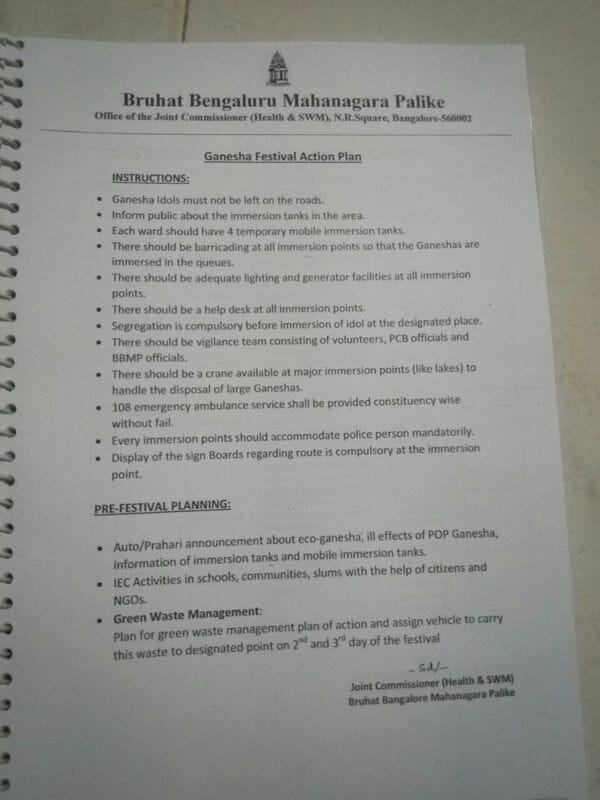 The final BBMP data on the number of idols immesed and the lake pollution data to be released by KSPCB to be released after all the immersions are over in the city will reveal the final picture of how ecofriendly the festival was.

Go green with Ganesha this time
‘Cannot ban Plaster of Paris Ganeshas because it is a sentimental issue’
Eco-Ganesha : Where to find him, and why?
To celebrate the Ganesha festival responsibly…

A fortnight for handing out bouquets

A pourakarmika being given the Namma Bengaluru award worth Rs one lakh, is particularly heartwarming when last year’s winners included the BBMP commissioner.

Excavations have shown that the port city known as Muziris was a part of an extensive maritime network linking the Indian Ocean with China, the Red Sea, the Nile and the Mediterranean Sea, over 2000 years ago. This talk by INTACH will tell you more about it.