Muniratna Naidu, the first-time MLA from the Indian National Congress (INC) represents Rajarajeshwari Nagar Constituency. He began his political career as a Municipal corporator from Yeshwanthpur and was previously a private contractor.

He was named in the Lokayukta Report in 2010 for being responsible for the death of Sanjana Singh, an 17-year-old student, who died when the wall of Government Veterinary Hospital collapsed on her. Munirathna was the BBMP contractor who had built the structure. His name also featured in fake bill scam unearthed by Technical Vigilance Cell of BBMP.

His affidavit to the Election Commission in 2013 makes no mention of any cases against him. Muniratna was recently named in the CID charge sheet on the Rs 1,500 crore fake bill scam. Muniratna is also a well-known Kannada film producer.

August 6, 2013: Munirathna Naidu promised 350 residents of Sachidananda Nagara Layout to look into the meddling done by BBMP officials and politicians in providing them khata certificates and basic amenities. .

January 21, 2017:  The MLA said that a demonstration of a 10-tonne waste incarceration machine will be installed in J P Nagar, following safety measures according to KSPCB. The project costing Rs 2 crore was necessary to use technology effectively to solve the garbage crisis, he said.

February 21, 2017: The Rajarajeshwari Nagar MLA inspected the proposed 11-km flyover from Magadi Main road. He said that detailed plans are yet to be finalised prior to budget sessions. The stretch near Bovipalya may not be constructed as stated in the proposal, he said.

March 3, 2017:  Congress leader Munirathna Naidu urged the government to form a committee with all stakeholders to formulate an alternative plan replacing the scraped steel flyover project.

January 31, 2018: While speaking at a BBMP council meet, the MLA complained about the incomplete white topping of the 10 km stretch on Tumakuru road, of which only 500 metres is concretised.

February 12, 2018: Posters of the leader defacing walls inside the JP Nagar Park are still bothering walkers, in spite of the BBMP renovating the 85 acre lung space. Though, some residents feel that spending money on beautification of the park was unnecessary.

January 27, 2014: MLA Munirathna Naidu was issued a legal notice by the Lokayukta for not disclosing assets and liabilities, as per the guidelines of the Karnataka Lokayukta Act, 1984.

December 28, 2014:  The files containing documents of incomplete civic works were found in a home in Vyalikaval, owned by the local MLA. The Lokayukta police raided the property after receiving a tip that BBMP officials were producing fake bills to prove work done on projects. The leader denied the allegation saying that he had rented out the house.

December 31, 2014:  BBMP corporators demanded the removal of the MLA who had a role to play in providing false documents regarding public works.Subsequently, the case was handed over to the CBI

December 21, 2015: The Peenya police received a petition signed by 60 residents, seeking legal action against the MLA who allegedly abused them and their female corporator during a surprise visit to the HMT ward.

January 1, 2016:  Congress corporator of HMT ward, Asha Suresh, and the Rajarajeshwari Nagar MLA accused each other of mental harassment in various forms, from blocking funds to stalking. This issue cropped up during the BBMP council meeting regarding the garbage crisis.

July 29, 2016:  BJP Corporator Mamatha Vasudev alleged that the MLA’s close aide is spying on her family and creating disturbance during her inspections. Congress corporator aspirant, G K Venkatesh, the right hand man of Munirathna Naidu, had vowed to take revenge on her, she said.

January 16, 2018:  BJP leaders are taken aback by the widespread campaigning by Munirathna Naidu, splashing posters of himself on borewells and distributing saris on Sankranti festival.

March 12, 2018: The MLA has been charge-sheeted in the fake bill scam worth Rs 1500 crore of civic work that has been documented but not carried out in his constituency between 2008-2010.

How did Munirathna use his LAD funds?

Every year, an MLA is given Rs 2 crore to spend on developmental works in his constituency. He should allocate the funds for government, community, law, order and health infrastructure

Munirathna has spent almost Rs 7.99 crores out of 10 crores. The maximum amount he spent was for drinking water – about Rs 4.51 crore. Data shows that he commissioned about 20 pure drinking water units. Out of these, 14 of them got a funding of Rs 25 lakh, while for 6 units, his expense was Rs 20 lakh.

The second highest expense is for bus shelters, with Rs 2.5 crore spending for this. About 41 items show the construction of bus shelters at Rs 6 lakh each.

There are nine rows indicating that Munirathna bought three-wheeled vehicles costing between Rs 70,000 to Rs 80,000 each. For education, his expense was marginal, at Rs 25 lakh, while for sports, he spent Rs 50 lakh. However, three items indicating three stages of  the same construction, “proposed Atimate for construction of gallery in Kengunte palya ground in war No.129, Gnanabharathi”(sic), have got repeasted for two consecutive years, totally costing Rs 50 lakhs.

Finally, there is one expense against which only name is given, and no explanation the spending, amounting to Rs 74,000. 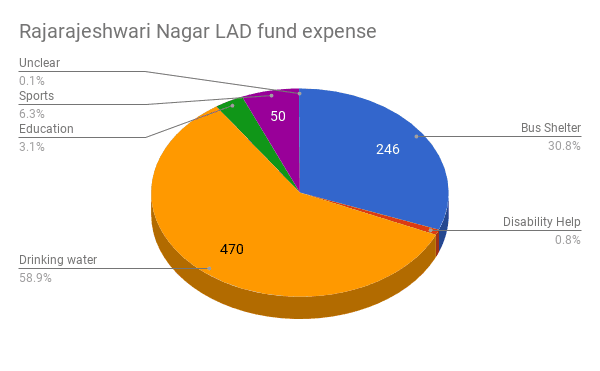 Meet a budding violinist and a quiz champion, both from JP Nagar.

No more flexibility over flexes: Will BBMP finally sort out advertising mess in city?

The BBMP claims to have removed more than 21000 banners so far, in quick response to the High Court of Karnataka’s directive to remove hoardings. What is the story behind this, and what does this mean?