S Suresh Kumar, a lawyer by profession, came into electoral politics as a city corporator in the year 1983 from the BJP. He was also its leader in the Council. Suresh Kumar has been closely associated with the Rashtriya Swayam Sevak Sangh and was even jailed during the Emergency.

He became an MLA from Rajajinagar in 1994 and has been elected from the constituency from four times since then except in 2004 when he was defeated by Narendra Kumar N L of the Congress. He was the Minister for Law and Parliamentary Affairs in the first BJP led Government of the South in 2008.

In his term between 2013 and 2018, he was a member of Committee on Petition of the Legislative Assembly , Joint Rules Committee and House Committee Regarding Tanks Encroachment (Koliwad Committee)

He is known to engage with citizens on social media. Despite his four-term victories, image of a clean politician, and despite being an able administrator, he hasn’t been considered for the post of Chief Minister within Bharatiya Janata Party so far.

His vision for the constituency: https://www.youtube.com/watch?v=sIdknzTQudY

December 16, 2014: Sureshkumar spoke in the assembly about the lack of basic infrastructure and transport in tourist places in North Karnataka like Pattadakallu, Aihole and Badami. He also called attention to the issue of misuse of CCTVs installed in trial rooms and hotel bathrooms, to which then-Home Minister K J George replied that action has been taken on the culprits.

November 23, 2015: Sureshkumar spoke at length on what Bengaluru Incharge Minister needs to do to solve garbage issues in the city, and suggested exploring waste to energy options.

March 22, 2016: Sureshkumar urged the government to give grace marks to PU students in Maths, as there were out of syllabus questions in the question paper.

July 5, 2016: Sureshkumar congratulated K B Koliwada on becoming the speaker of legislative assembly, and requested him to continue as the chairman of lake encroachment investigation committee as well.

March 28, 2017: He spoke in the assembly on failure of law and order in Bengaluru, saying the police are not able to control gangwars, crime on women and children drugs, bitcoin business. He quoted two examples of people being harmed and killed by armed gangsters.

Suresh Kumar in the news: a glimpse of what he has been up to in five years

On July 10, 2014: BJP leader M Suresh Kumar wrote to former education minister Kimmane Ratnakar, requesting him to guarantee more seats under RTE in private schools. In his reply, Ratanakar admitted to the existence of the problem. He promised during assembly discussions to ease stringent admission processes by allowing rental agreements as address proof.

On March 3, 2015:  Former Law Minister said that he does not believe in VVIP culture, which is always full of pomp and arrogance. Travelling with the red-beacon light, according to him, could result in alienating the people, who look at this attention seeking tactic with contempt.

On April 4, 2017: BJP spokesperson Suresh Kumar stayed at an open cowshed in Mysuru while he was campaigning for Srinivas Prasad, (who recently quit Congress) in the by-election at Nanjangud. Instead of reaping the benefits of five star accommodation that was provided to him, he chose to spend the night in simpler comforts.

April 15, 2017: Rajajinagar MLA Suresh Kumar reprimanded fake universities for offering degrees by taking bribes. He was particularly irked when he received an offer-letter by post, handing him an honorary doctorate at a price of Rs 1.75 lakhs. Former DGP Praveen Sood said he would take suo-moto action against Victoria Global University, an institute claiming international accreditation.

October 4, 2017: BJP Spokesperson, Suresh Kumar, is the designated head of the manifesto committee of the 2018 state elections. He is in charge of the 17 member committee.

November 19, 2013: BJP MLA Suresh Kumar opposed the Karnataka Prevention of Superstitious Practices Bill 2013 proposed in the assembly, on the grounds that it was against Hindu sentiments.

May 9, 2017: MLA Suresh Kumar was under fire for uploading a photograph showing the poor state in which two state police-women were seen travelling in a train, sleeping next to a toilet. The women were supposedly travelling to a sports tournament in Kalaburgi, wearing jackets revealing their police identity. Senior police officers refuted the claims and called the photos fake. ADGP Kamal Pant said that the provisions for state personnel to travel within the state was limited to buses, not including trains.

September 15, 2017: The image of a woman holding ‘I am Gowri’ placard upside down went viral on social media, which was also shared by Suresh Kumar.

How did Sureshkumar use his LAD funds?

Suresh Kumar seems to have spent roughly about Rs 809.52 lakh in five years out of the Rs 10 crore he received for Rajajinagar.

The maximum expenditure has been made to provide education and health infrastructure. It seems to be devoted to the construction of government school buildings. Some of the expenditure appears to be disproportionate. For instance, while constructing a toilet in a Juganahalli government school cost Rs 10 lakh, building school rooms – without mentioning how many – cost only Rs 5 lakh.

Health infrastructure has also got the MLA’s attention, with an expenditure of Rs 234.15 lakh. But while gym equipment at the Sri Rama Mandira public stadium received Rs 3.25 lakh, another project described as ‘Open gym equipment’ at many parks received Rs 22 lakh each. One ‘open gym equipment’ activity at Dr Ramamurthy Park got a grant of just Rs 1.68 lakh. At yet another spot, rooftop construction work to “facilitate yoga exercises” received Rs 10.4 lakh.

Toilet constructions, bus shelters, community infrastructure and camera installations have received minimal grants, while there has been no road improvement work has been undertaken using MLA LAD funds. In an interview with Citizen Matters, Suresh Kumar was pretty clear that he did not want to venture in to the BBMP’s scope of work. 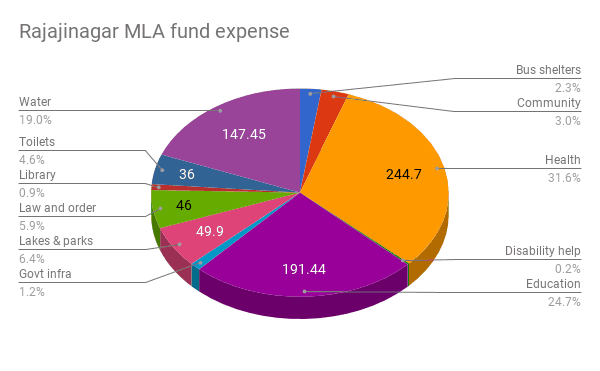 Budget speech by Chairman of BBMP Taxation Committee M Shivaraj, for the year 2016-17.

BBMP has been able to collect Rs 1723 crore as property tax in first two quarters of the financial year. Road improvements top the chart among the works undertaken.